On some of the most significant issues of the day, including how the United States should respond to Russia's invasion of Ukraine, Americans across party lines are in agreement, albeit often for different reasons.

Pivot to Europe: US Public Opinion in a Time of War

Russia’s invasion of Ukraine sent shockwaves around the world. The crisis put European security at risk, gave rise to an exodus of refugees, and stressed a global economy still recovering from the COVID-19 pandemic. While Americans are far removed from the physical struggle on the ground, they have felt the reverberations of the war in their own lives through increased food prices, supply chain disruptions, and higher costs at the gas pump.

The war in Ukraine has also affected Americans’ view of the world today. Despite the economic pinch they have endured during this crisis, Americans think helping Ukraine in its struggle against Russia is worth the sacrifice. And somewhat surprisingly given the polarization in the United States today, this commitment is embraced by supporters of both major political parties. On some of the most significant foreign policy issues of the day—the threats facing the country, how the United States should respond to Russia’s invasion of Ukraine, and the US military presence in Europe and Asia—Americans across party lines are in agreement, albeit often for different reasons.

The invasion has refocused public attention on Europe, with Americans across the political spectrum now saying Europe is the most important region of the world for the security of the United States (50%). This represents a notable shift from past surveys, when their security concerns focused squarely on the Middle East. Americans’ commitment to NATO and support for US military bases in Europe are now at their highest levels in nearly 50 years of polling by the Chicago Council (Figure A). In addition, majorities support the accession of new NATO members Sweden (76%) and Finland (76%) and would also support the accession of Ukraine (73%) and Georgia (67%). 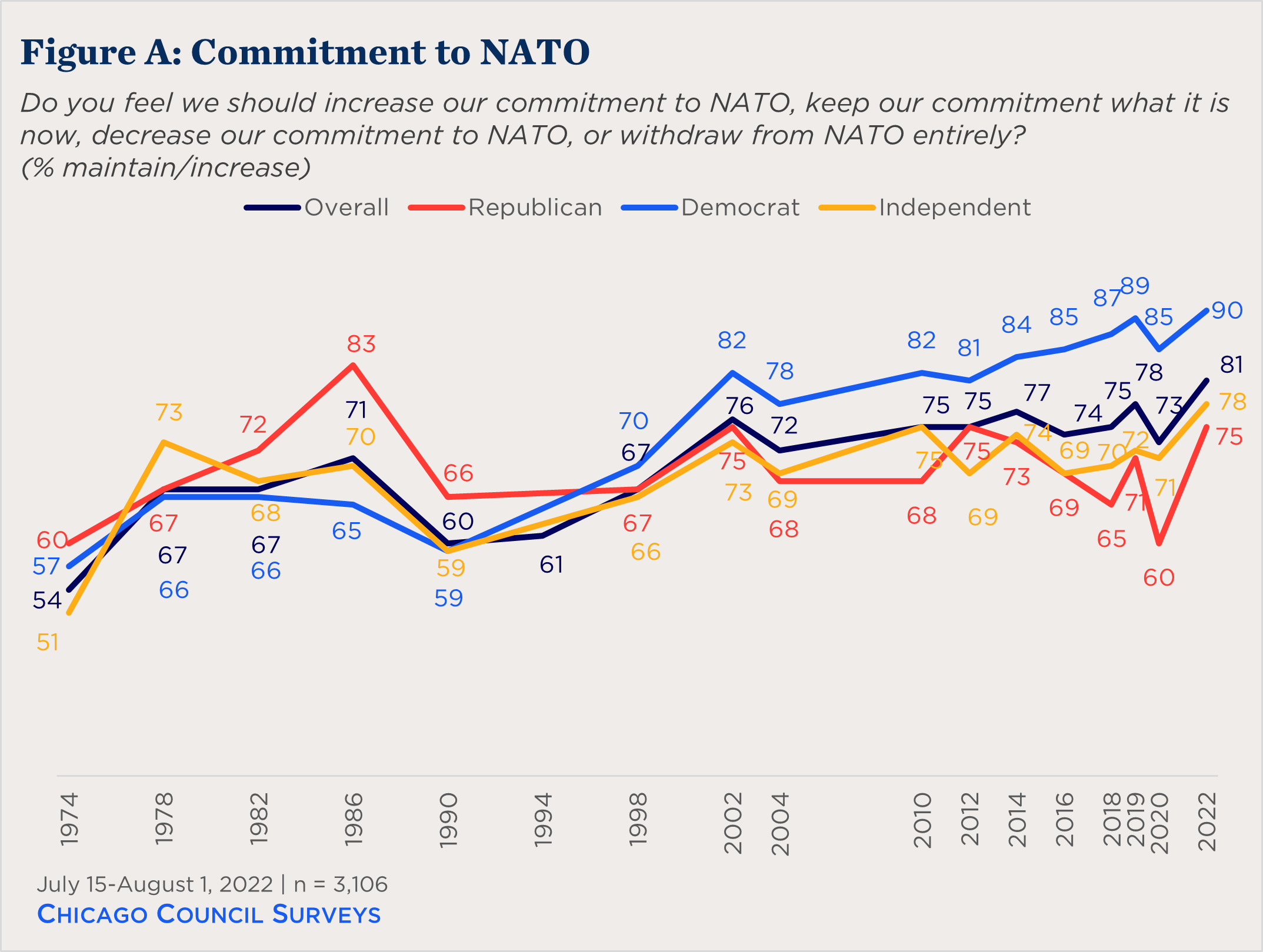 Despite the high price tag associated with US assistance to Ukraine, solid majorities of the American public remain supportive of US economic assistance (71%) and military transfers (72%) to Ukraine (Figure B). Indeed, 58 percent are willing to continue to support the country “as long as it takes”, even if American households will have to pay higher prices for gas and food. While a majority remain opposed to sending US troops to fight on Ukrainian soil, a substantial minority of Americans (38%) would support it despite repeated pledges from President Joe Biden and NATO leaders that they will not send their troops into combat in Ukraine. 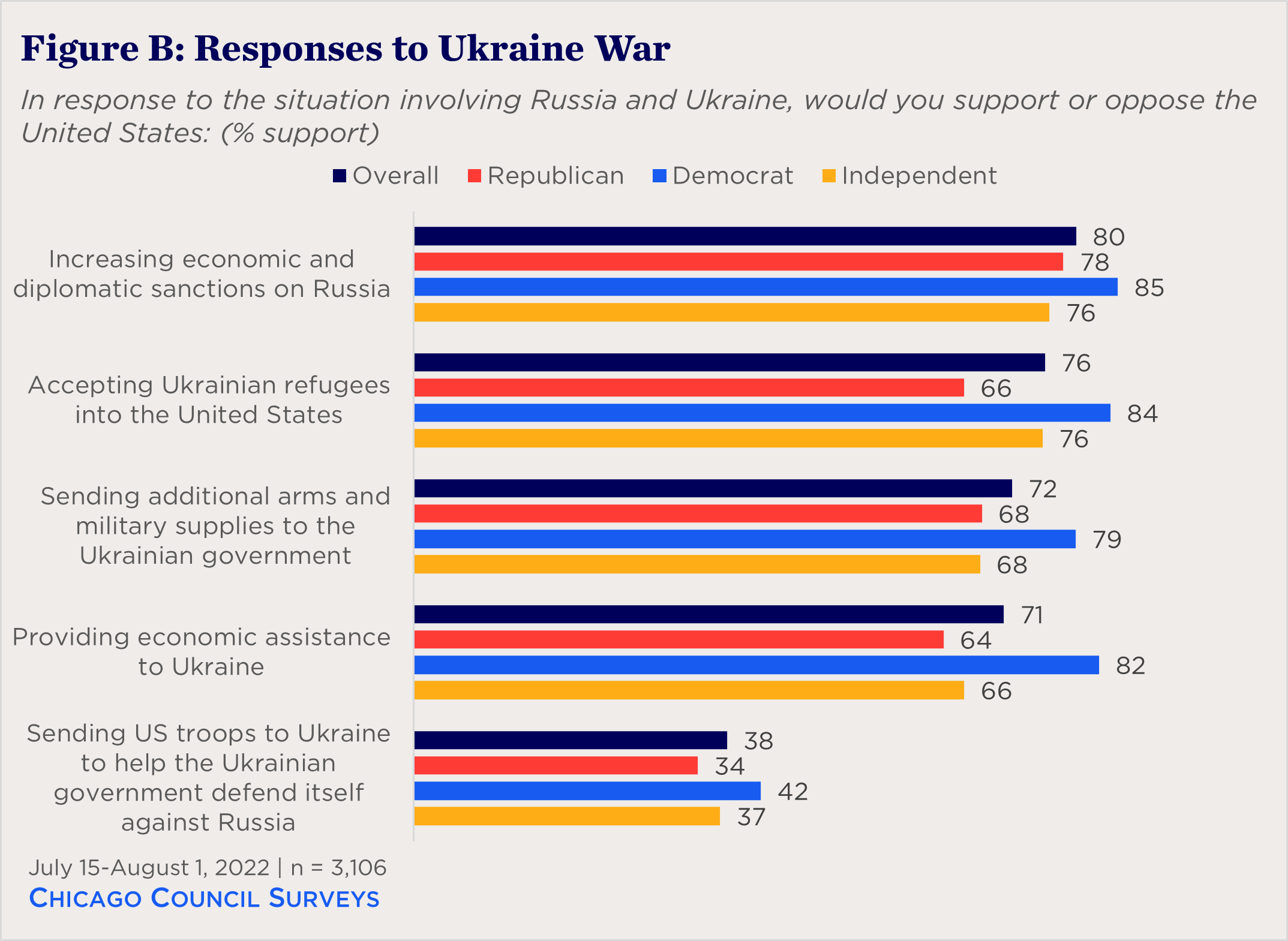 The Public Views Russia's Invasion as Setting a Precedent

While Americans say Europe is currently the most important region for US security, they see the potential for other countries to emulate Russia and provoke additional conflicts elsewhere. Nearly two-thirds of Americans (64%) expect that other countries will follow Russia’s example of launching wars for territorial conquest, and three in four (76%) believe China will view Russia’s invasion of Ukraine as a precedent, encouraging it to invade Taiwan.

If Beijing were to invade Taiwan, Americans favor assisting Taipei along the lines of the country’s current assistance for Ukraine (Figure C). Majorities say if China were to invade Taiwan, they would support imposing economic and diplomatic sanctions against China (76%), sending additional arms and military equipment to Taiwan (65%), and even using the US Navy to prevent China from imposing a blockade around Taiwan (62%). Four in 10 (40%) say they would support putting US boots on the ground to help Taiwan defend itself. 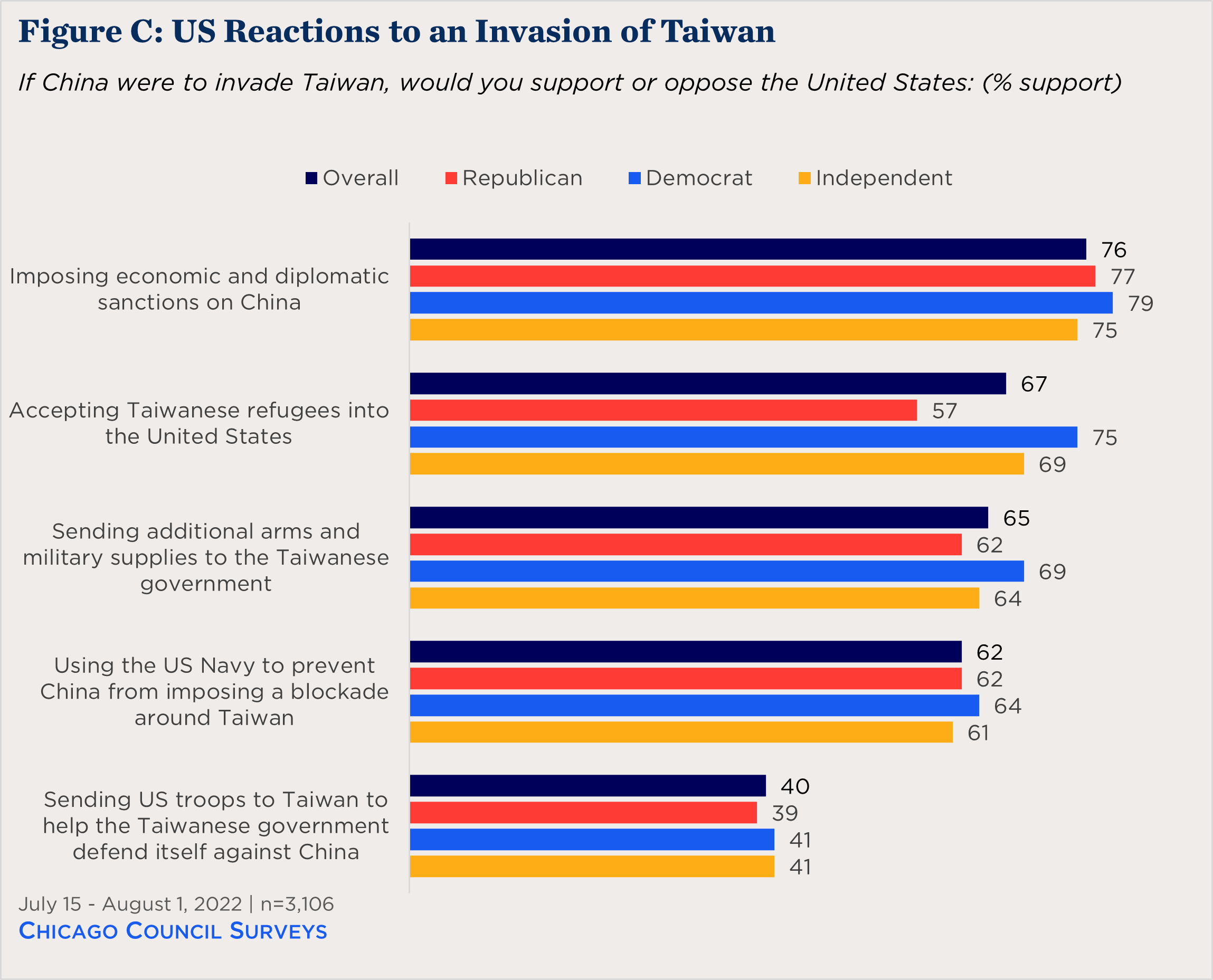 Partisan Agreement Does Not Extend to Foreign Policy Priorities

Despite the bipartisan agreement on how the United States should address the war in Ukraine and the threat to Taiwan, there remain stark partisan differences over foreign policy more generally. As in past surveys, Republicans favor a more unilateral and security-first approach to foreign policy and are wary about engaging abroad for reasons other than American security or economic interests. It might follow, then, that Republican support for maintaining an active part in world affairs, at 55 percent, is now at the lowest in the history of the Chicago Council Survey (Figure D).

Democrats, on the other hand, tend to think internationally coordinated solutions to global problems should be the main focus of US foreign policy. In line with this mindset, 68 percent of Democrats support an active US role in world affairs. While still much higher than among Republicans, Democrats’ support for an active role has also declined from its peak of 78 percent two years ago to 68 percent now. As a result, overall support for an active US role in world affairs has declined to 60 percent among all Americans—the lowest since 2014. 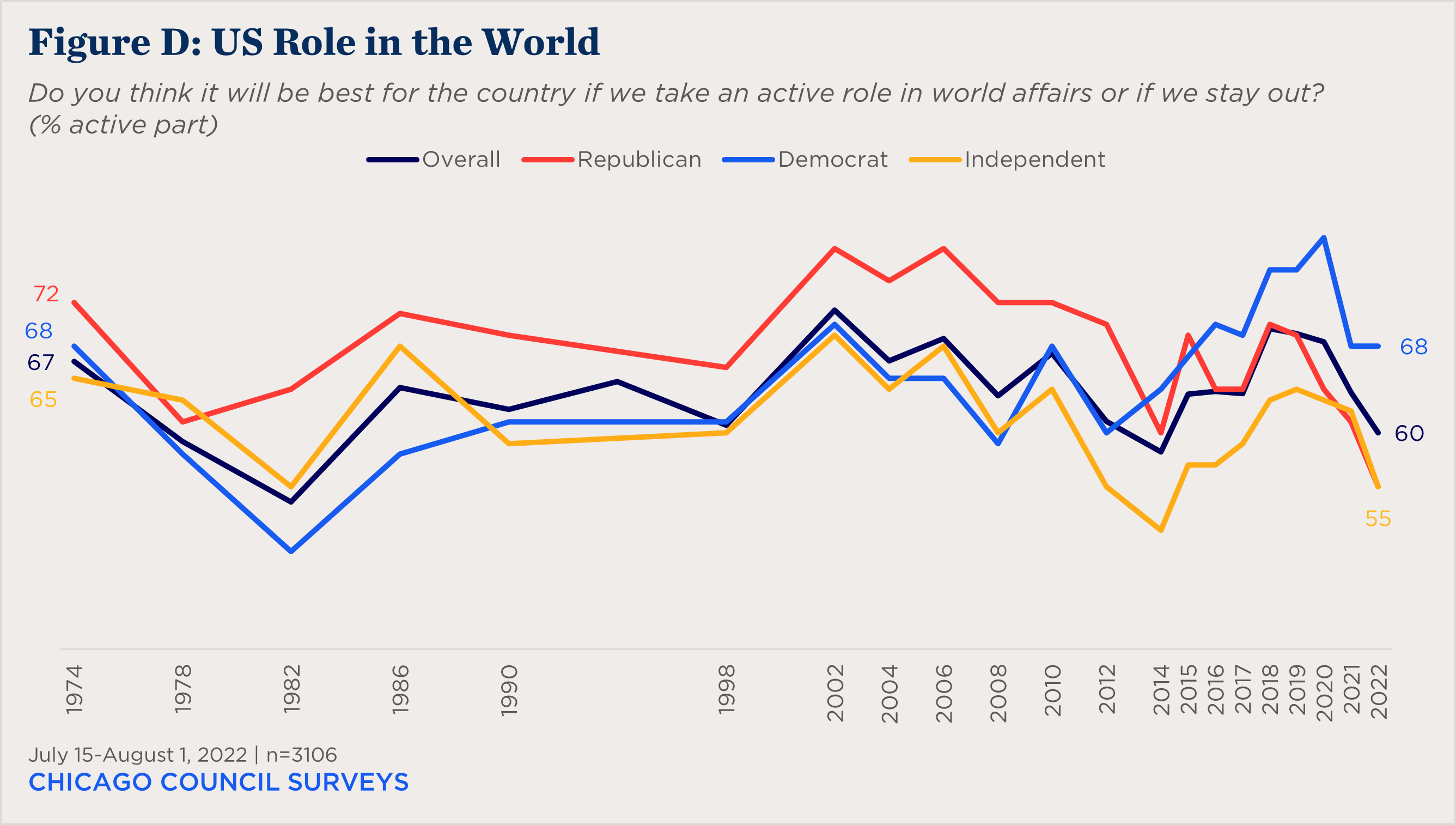 These partisan differences are even starker when it comes to views of the primary purpose of US policy abroad and the most effective ways to achieve America’s goals.

Republicans emphasize the physical security of the country and the use of military power to deter and respond to threats (Figure E). When asked about the most important priority in making foreign policy, nearly half answer that it is to ensure the physical defense of our country (48%), with the need to seek economic gains for the United States in global trade coming in second (23%). To achieve those goals, Republicans say the most effective approaches are maintaining military superiority (66% very effective) and maintaining economic superiority (56% very effective). 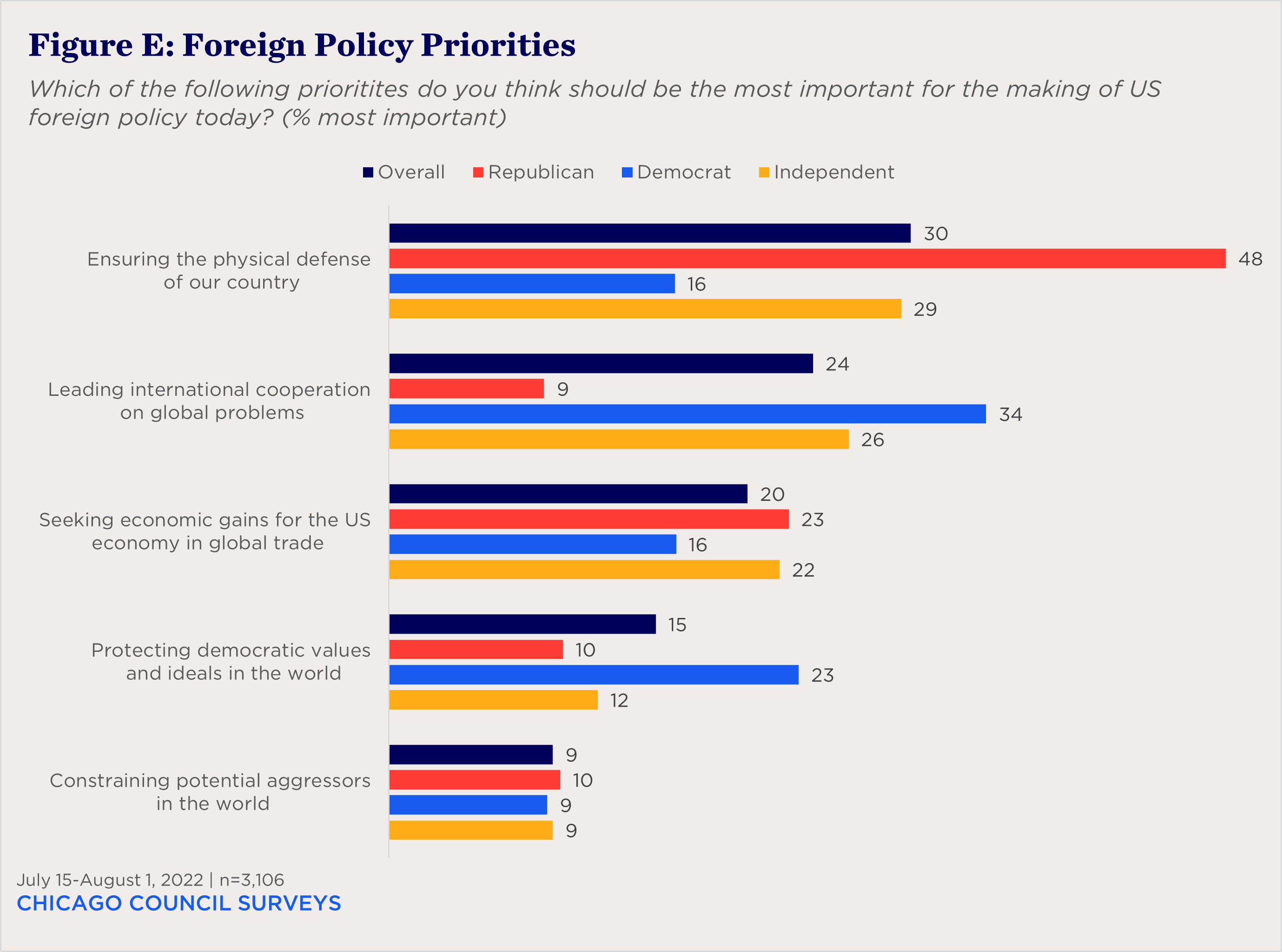 Democrats take a broader view of US security and the US role in leading multilateral efforts to address these issues. They are most likely to say the top priority of US foreign policy should be leading international cooperation on global problems (34%) or protecting democratic values in the world (23%). And to achieve those goals, Democrats say the most effective foreign policy approaches are maintaining existing alliances (62% very effective) and participating in international organizations (48% very effective).

Rather than further dividing the West, Russia’s invasion of Ukraine had the unintended consequence of uniting NATO members in assisting Kyiv financially and with military transfers, accepting Finnish and Swedish applications to join NATO, and shoring up the US public commitment to European security. Americans across party lines tend to agree on some of the most significant foreign policy issues of the day, including the US response to Russia’s invasion of Ukraine, the possibility of a potential invasion of Taiwan, and the US military presence in Europe and Asia.

Across the political spectrum, Americans agree Europe is now the most important region for US security, and they support expanding NATO and defending member countries. Even though Republicans and Democrats may have different reasons for doing so, majorities in both camps support US bases in Europe and agree on specific US policies toward Russia.

Taken together, these findings suggest that policies dealing with traditional security issues can appeal to Republicans and Democrats alike if the issue or policy taps into the underlying foreign policy framework of each side.

Ivo H. Daalder served as the US ambassador to NATO from 2009 to 2013 prior to becoming President of the Council. Previously, he was a senior fellow in foreign policy studies at the Brookings Institution and served as director for European affairs on President Bill Clinton’s National Security Council. He is the author or editor of 10 books.
@IvoHDaalder

Assistant Director of Communications
Contact
Send a Message or Question

The survey was conducted from July 15 to August 1, 2022, among a representative national sample of 3,106 adults. The margin of sampling error for the full sample is +/- 1.8 percentage points, including a design effect of 1.2704. The margin of error is higher for partisan subgroups or for partial-sample items. Partisan identification is based on respondents’ answer to a standard partisan self-identification question: “Generally speaking, do you usually think of yourself as a Republican, a Democrat, an Independent, or what?”

The survey was conducted in English and Spanish by Ipsos Public Affairs, a polling, social science, and market research firm in Palo Alto, California, using a randomly selected sample of Ipsos’s large-scale nationwide research panel, KnowledgePanel® (KP). KP is the first and largest online research panel that is representative of the entire US population. Ipsos recruits panel members using address-based sampling (ABS) methods to ensure full coverage of all households in the nation.

The survey was fielded to a total of 6,350 panel members, yielding a total of 3,253 completed surveys (a completion rate of 51.2 percent). The median survey length was 26 minutes. Of the 3,253 total completed surveys, 147 cases were excluded for quality control reasons, leaving a final sample size of 3,106 respondents.

Complete methodology can be found in the full 2022 Chicago Council Survey report.

Issues Public Opinion US Foreign Policy
Back to Research Listing