With Xi Jinping poised to receive a third term at the 20th Party Congress, American opinion of China has never been worse.

At the 20th Party Congress of the Chinese Communist Party, Xi Jinping is expected to receive a precedent-breaking third term as the general secretary, firmly cementing his role in directing the future of the People’s Republic of China. Since taking the reins of power in 2012, Xi has steered China towards a more prominent international role, one seen as befitting the world’s second-largest economy. Over the same period, US-China relations have turned from cooperation to competition, driven by increasing conflicts of national interests and growing mutual suspicion of the others’ motives and goals. As a result, Xi has presided over the greatest collapse in American public esteem for China since the normalization of US-China diplomatic relations in 1979.

In the last several years, American views of China have fallen dramatically from their normal historical range. From 1978 through March 2018, American ratings of China on a 0-100 feeling thermometer scale averaged a slightly cool 44 degrees, with occasional highs (53 in 1986) and lows (39 in 2013). In the last two years, however, public sentiment toward China has taken a sharp negative turn. Today, Americans rate China at a chilly 32 degrees, a record low temperature in Council polling and similar to views of the Soviet Union during the Cold War. The only countries Americans rated lower than China in this year’s polling are Iran (25), Russia (22), and North Korea (20). 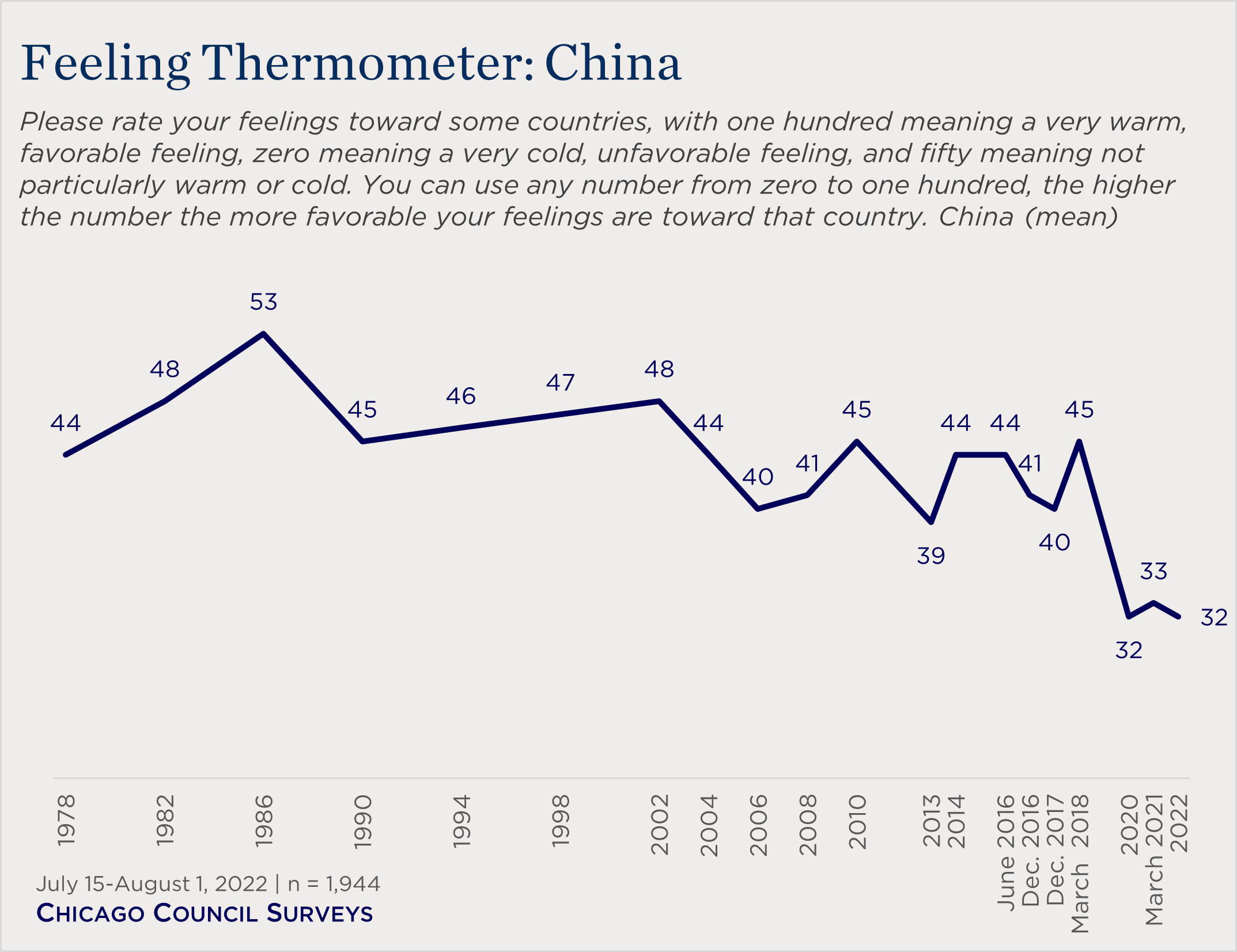 The collapse in American favorability towards China has been bipartisan, but especially pronounced among Republicans. In the spring of 2018, Republicans rated China an average of 43 out of 100, while today they give China a mean score of 24—a drop of 19 points in four years. Democrats’ views have also turned colder, from 46 out of 100 in March 2018 to a record low of 36 today. 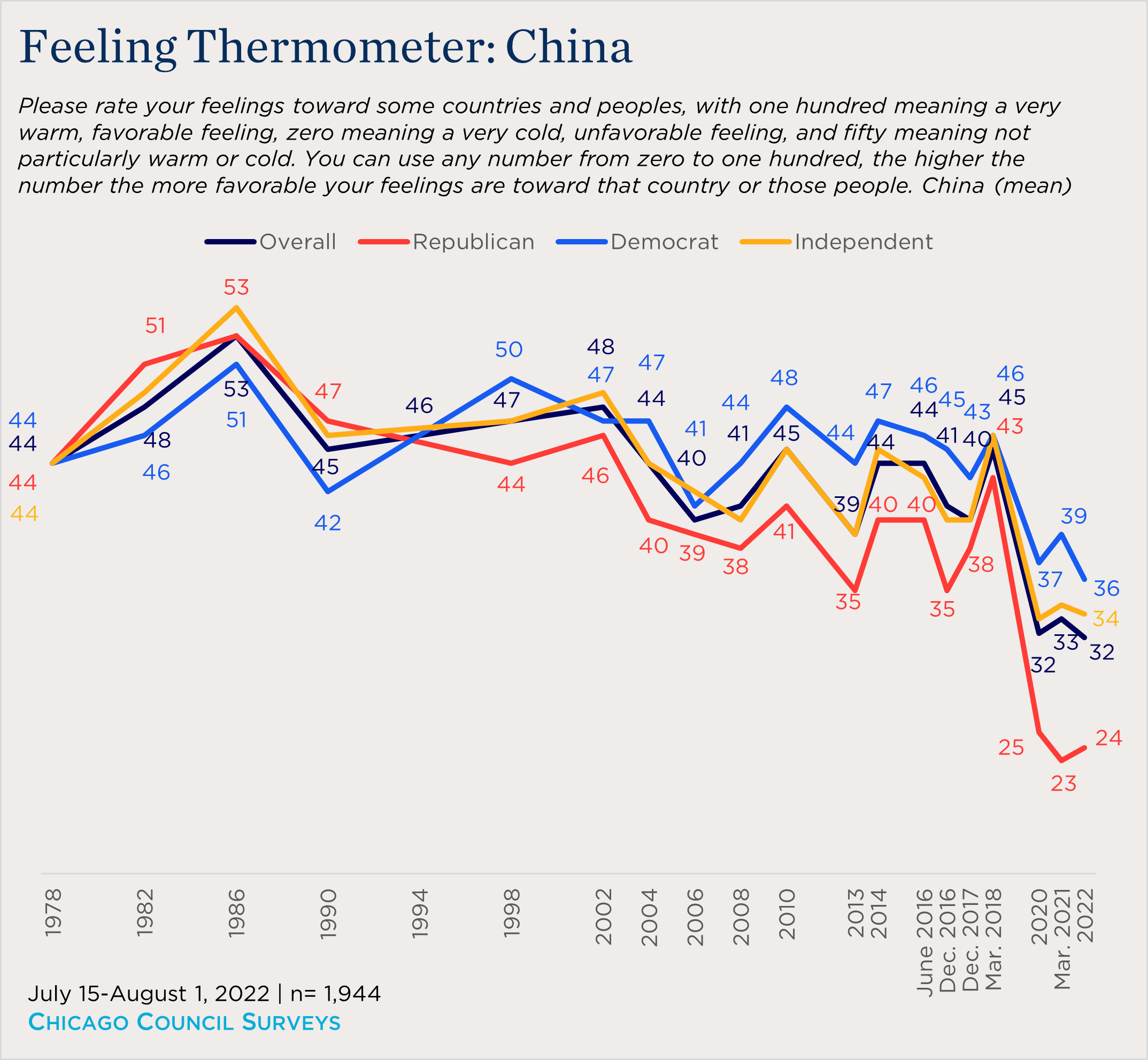 As American views of China have turned more negative in recent years, Americans’ sense of threat from Beijing has become more pronounced. In the 2022 Chicago Council Survey, 52 percent of Americans say that China’s territorial ambitions represent a critical threat to the United States, including a majority of Republicans (62%), half of Democrats (50%), and a plurality of Independents (48%). Just as Republicans hold more negative views of China, they are also more likely to view Chinese power as a threat to the United States, across several different phrasings from Council surveys in the past 18 months. 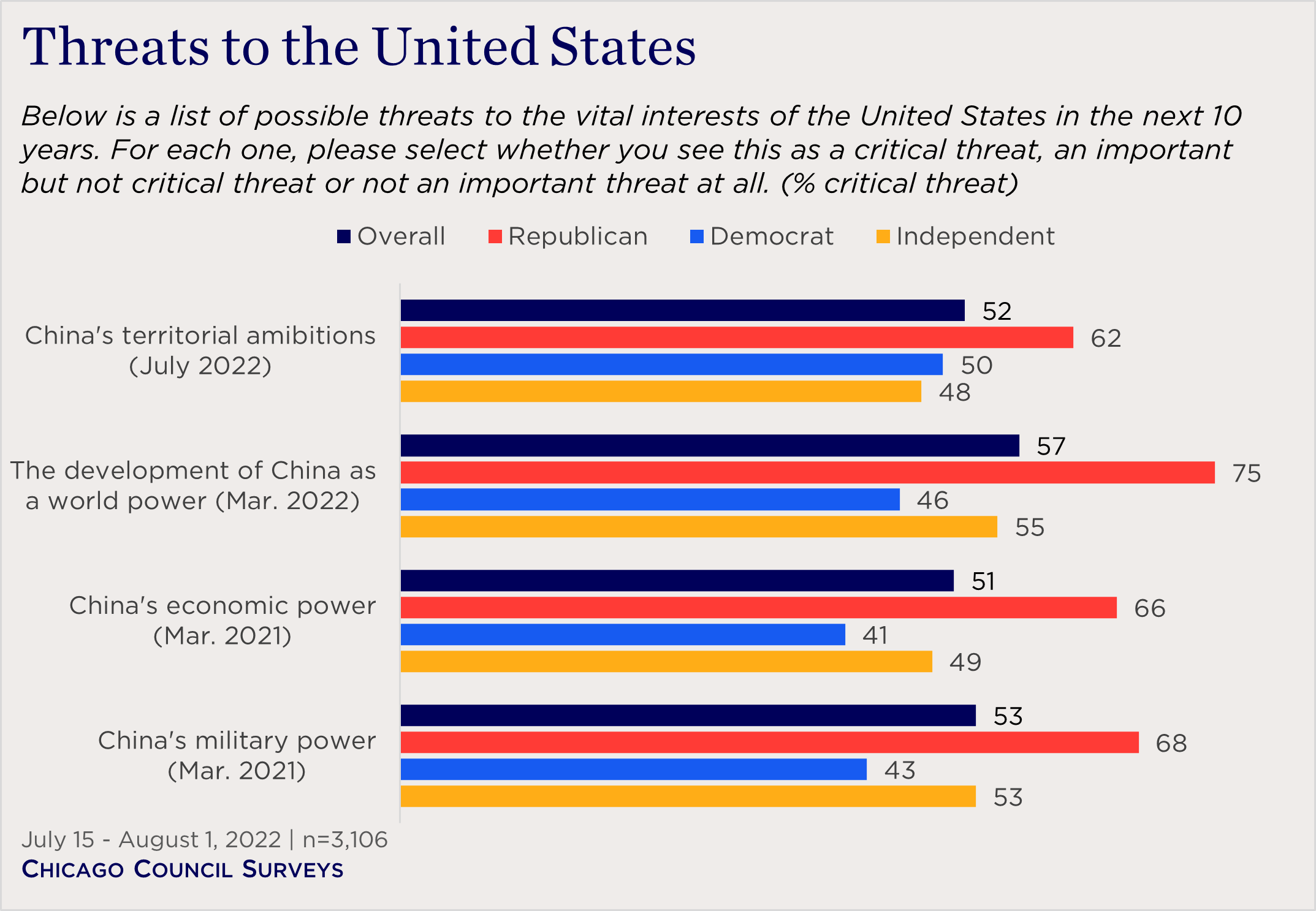 Americans did not always see a rising China as a threat to the country. From 2004 through early 2020, only a minority of Americans viewed the development of China as a world power as a critical threat to US interests. Since 2020, however, majorities of Americans have named China’s military and economic power, its development as a world power, and its territorial ambitions all as critical threats to the United States. 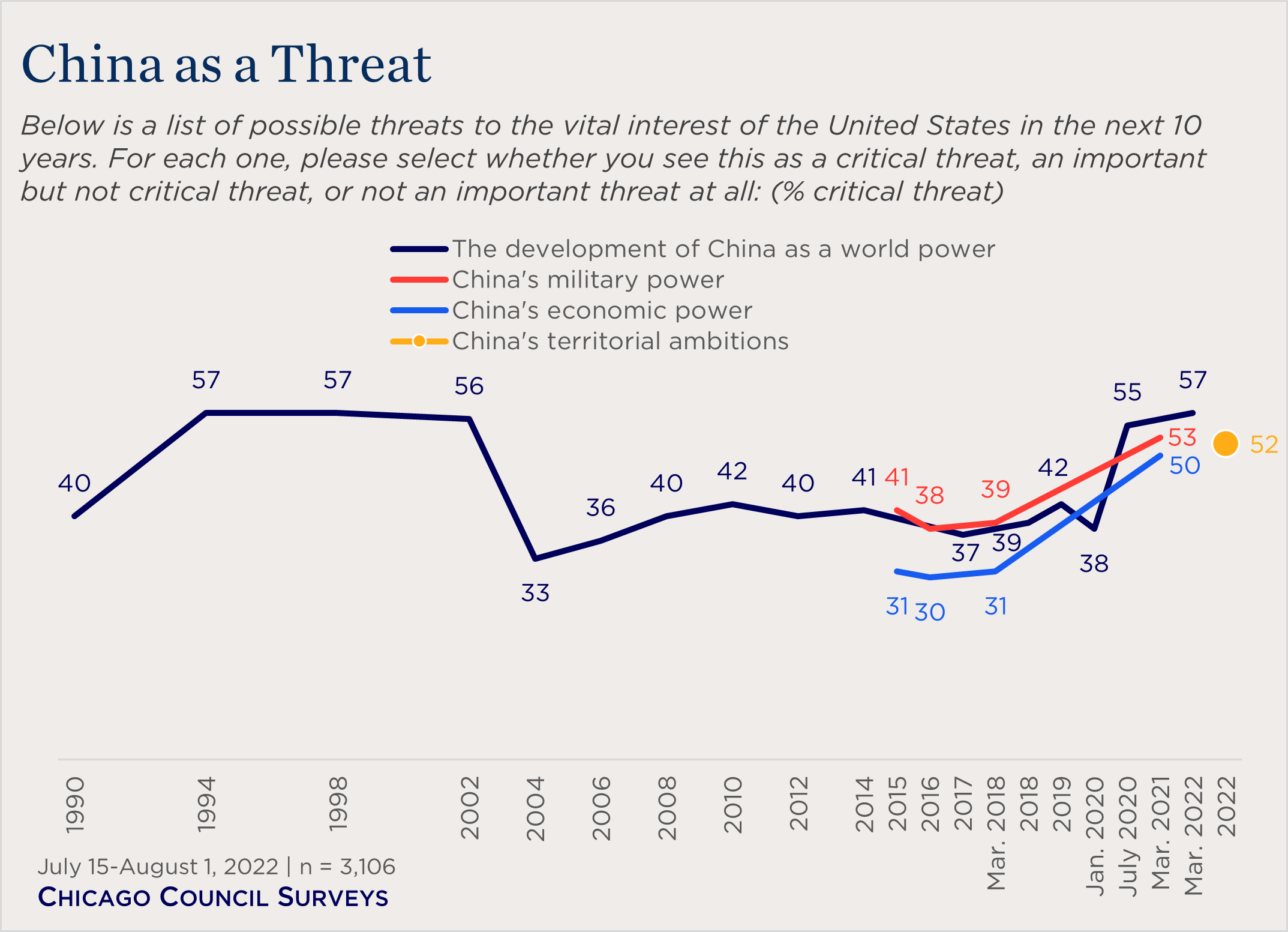 A majority of Americans (57%) disagree with the statement that “how China handles the treatment of ethnic or religious minority groups is a matter of internal Chinese politics and none of our business.” That viewpoint includes majorities of Democrats (62%), Independents (56%), and Republicans (52%).

Beyond public concerns about human rights in China, the public also believes that these kinds of internal behaviors are indicative of how a country will behave internationally. Most Americans (85%) believe that governments that oppress their people at home are more likely than other countries to be aggressive abroad. This is also a broadly held belief across the political spectrum.

However, Americans are also realistic: six in 10 (60%) say that the US will have to learn to live with China having strong influence in the region, even if that influence displaces that of the United States. 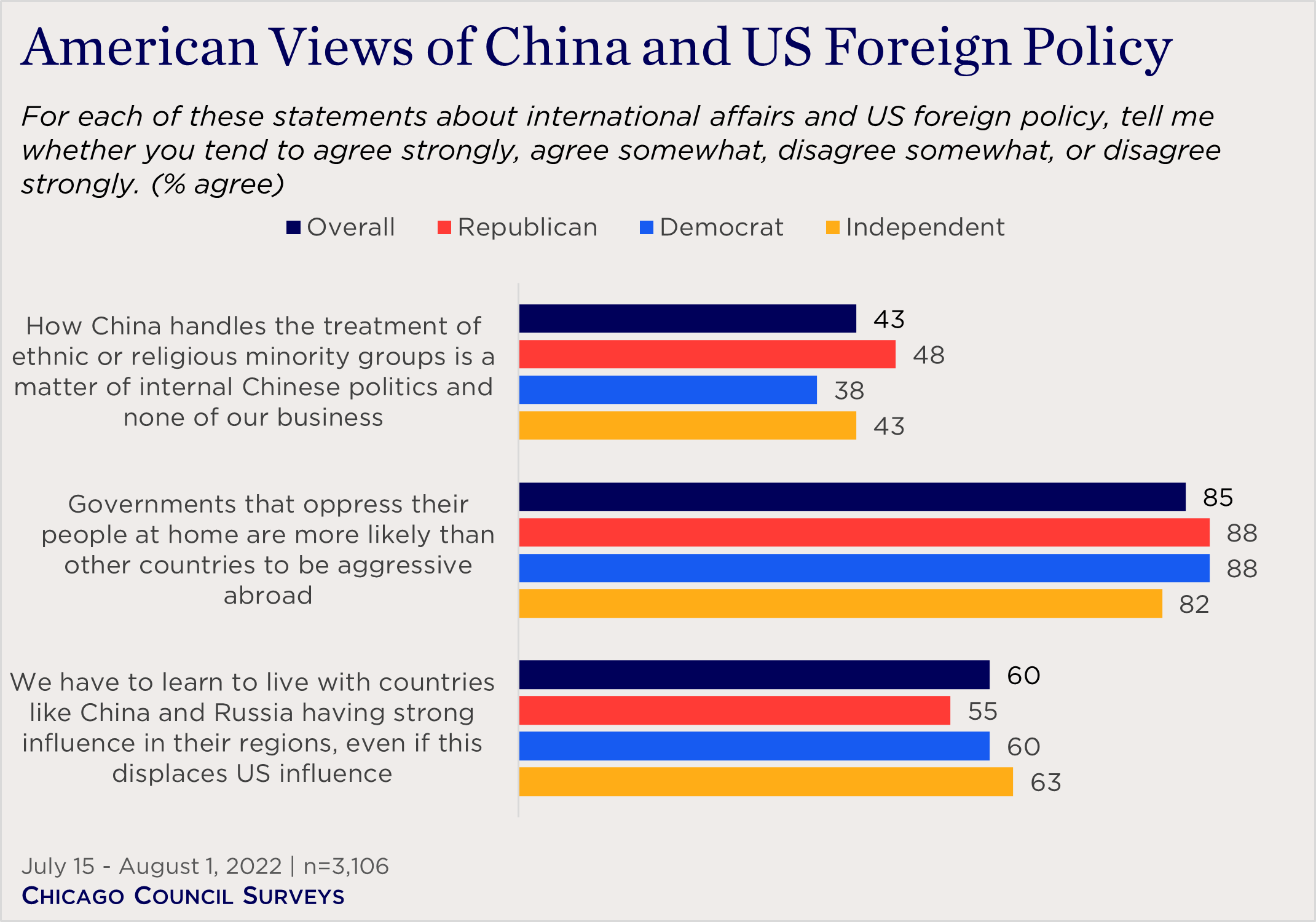 Growing Support for US Bases in Asia; Warm Feelings for US Regional Allies

While Americans accept that China will have strong influence in the region, this does not mean Americans are interested in ceding that space, nor are they less supportive of the US presence in the Indo-Pacific. Instead, support for US bases across Asia are at or near all-time highs, reflecting steady increases in support over the past decade. South Korean bases receive the highest level of support, as they have for decades: 72 percent of Americans favor bases in the country.

Support is also high elsewhere in the region. Two-thirds of Americans (67%) support US bases in Japan, up 16 percentage points from a decade ago. Similarly, support for basing US troops in Australia has risen to 56 percent, up from just 40 percent in 2012. 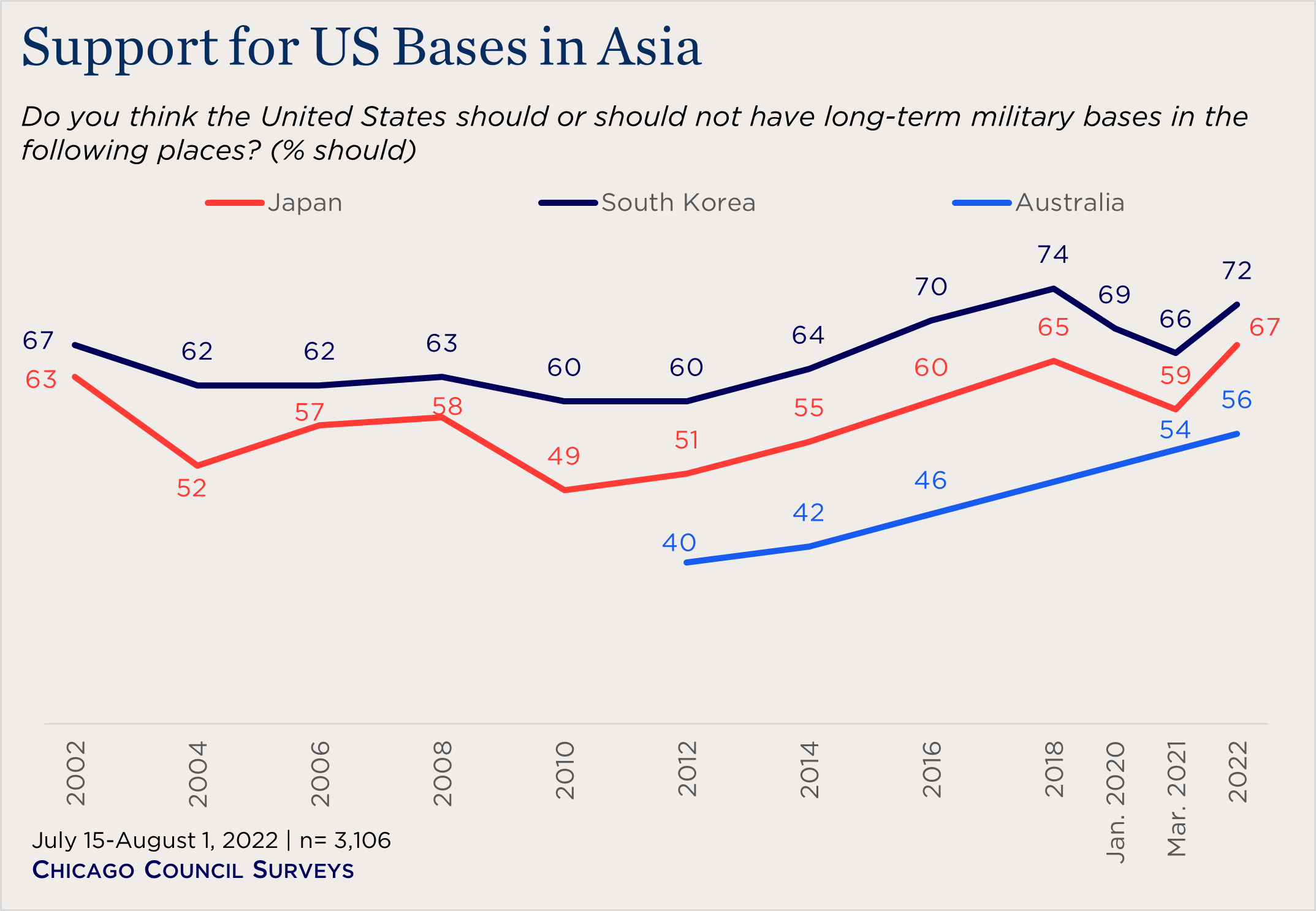 Just as American support for bases across Asia has risen notably over the past decade, so have views of US allies. As measured on a 0-100 feeling thermometer, American esteem for many key allies and partners are at record highs, including Japan (66), South Korea (61), and Taiwan (60). Americans also feel very warmly towards Australia (74 as of March 2021). Views of India, meanwhile, have been stable and mildly warm for the past decade. 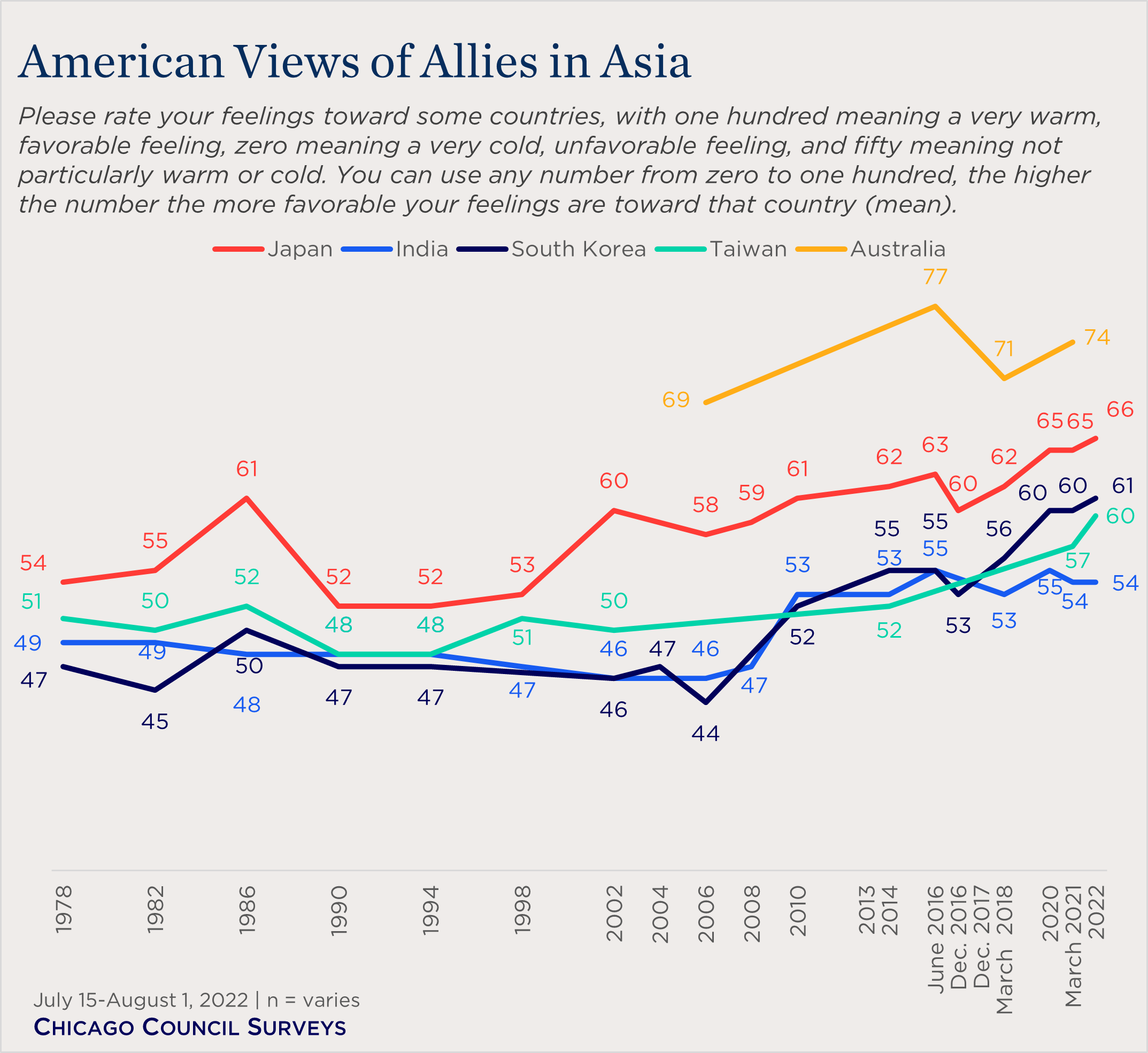 Responding to China's Rise: Americans Want US in a Supporting Role

Reflecting this embrace of allies around Asia, the American public does not want to see the United States go it alone in dealing with the growing power of China. Instead, a majority of Americans (53%) say the United States should play a supporting role in coordinating an international response to China’s rise. This includes a majority of Democrats (57%) and Independents (54%), while Republicans are divided between taking a supporting role (45%) and a leading role (42%). 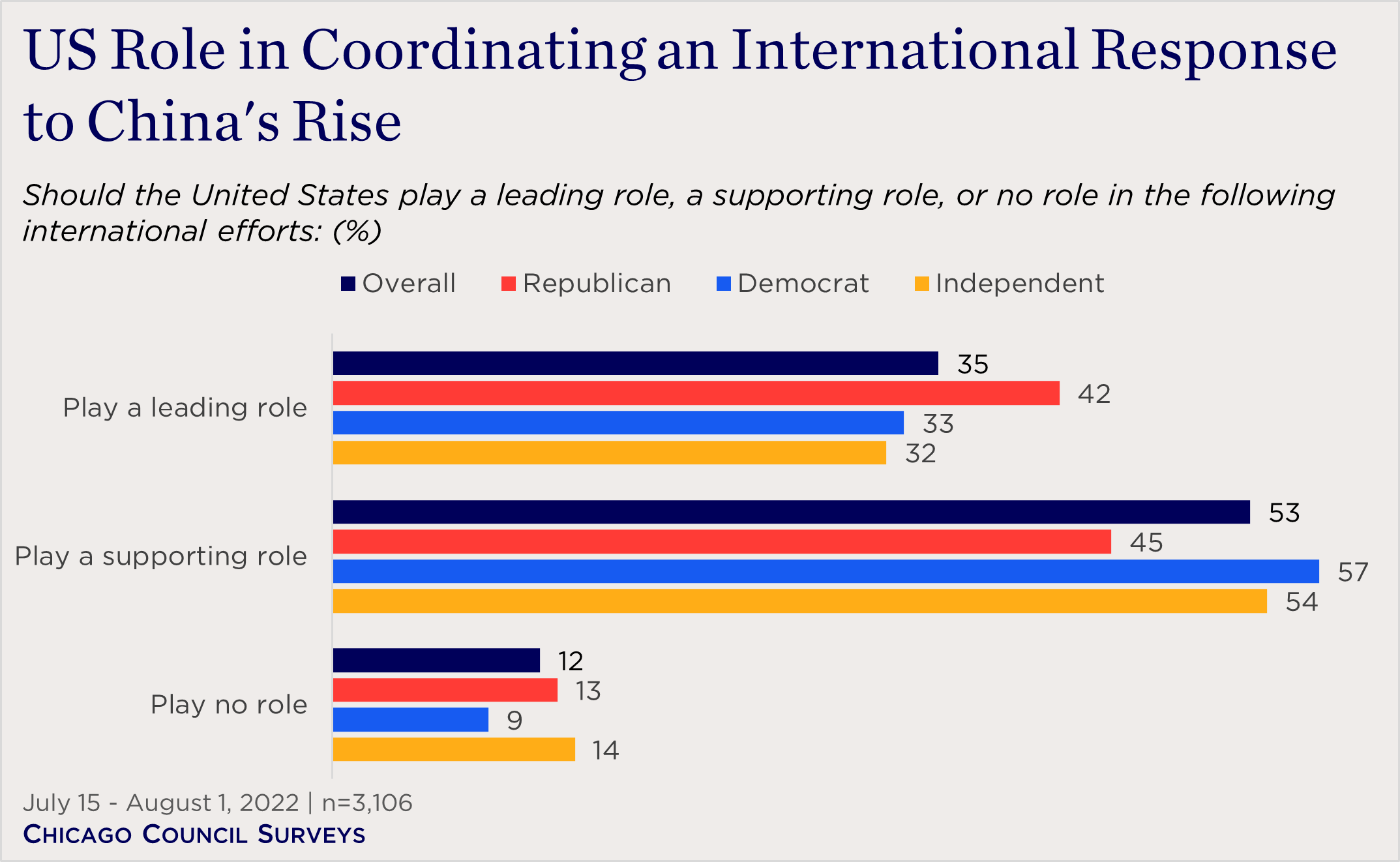 Entering his third term as general secretary, Xi Jinping will face a number of challenges both at home and abroad. One of those challenges will be an American public and policy establishment that increasingly views China as a threat. Over the past six years, US-China relations have moved from a policy of engagement to a delicate balance of competition, cooperation, and confrontation. China’s “no-limits” partnership with Russia, announced just prior to Russia’s invasion of Ukraine, has further aggravated an already tense relationship, as have US efforts to cut China off from critical aspects of the high-technology supply chain.

Though partisan disagreement is the norm in Washington, public views of China remain somewhat bipartisan. Both Democrats and Republicans have become more likely to view China as a threat in recent years, and bipartisan majorities support the US military presence in allied nations around the Indo-Pacific. when it comes to the most likely flashpoint for conflict between the United States and China—Taiwan—Americans of both parties also agree on a common approach to handling a Taiwan crisis: supporting Taiwan with all measures short of sending US troops to the island.

However, not all views of China are bipartisan. As past Council polling has shown, Republicans are less confident in US power vis-à-vis China, and more likely to support decoupling the United States and China in the economic, scientific, and academic realms. These greater Republican concerns over China’s growing strength, and their more negative views of China, could foreshadow a more aggressive US approach under a Republican Congress or future Republican administration.

American feelings toward Russia and China are lower than during the Cold War, Council polling shows.

Should the US Embrace or Reject Engagement with China?
Podcast Deep Dish on Global Affairs Podcast

Paul Heer joins Deep Dish to argue that engagement is necessary in shaping the US-China relationship.

If the United States and China are competing over global public opinion, who’s winning, and where?