Americans Focused Elsewhere as Tensions Rise on the Korean Peninsula

With all eyes on Ukraine, it is unclear if a seventh North Korean nuclear test will really register with the American public.

After several years of relative calm, tensions on the Korean Peninsula are beginning to increase. After the United States and South Korea conducted long-scheduled joint military exercises, North Korea cited those exercises as the reason for its recent spate of missile launches. There is growing speculation that its seventh nuclear test is imminent. The United States and South Korea are likely to respond with an emergency meeting of the United Nations Security Council, statements of coordination, and new rounds of military exercises. But it is unclear how these tensions will shape American public opinion. Recent survey data suggests Americans, focused on conflicts elsewhere, may view the Korean peninsula problem as intractable.

Even before the recent tensions, Americans held strongly negative views of North Korea. The same is true in 2022. On a 0-100 scale, where 100 indicates warm, favorable feelings, Americans gave North Korea an average rating of 20. This places last North Korea last among all countries included in the survey, below China (32), Iran (25), and Russia (22). It is important to note that the survey was conducted in July, well after Russia’s invasion of Ukraine. 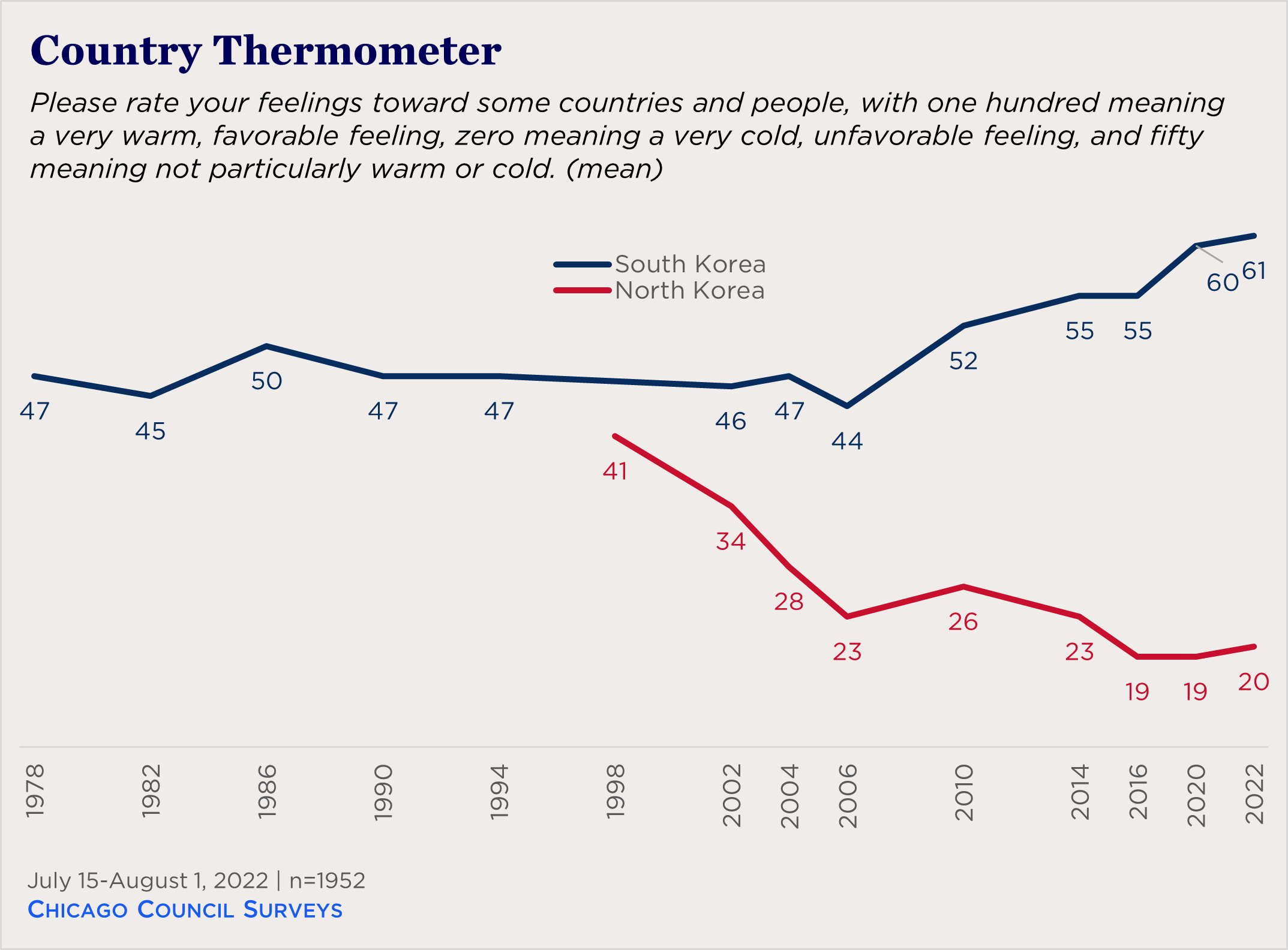 Meanwhile, the favorability of South Korea is at an all-time high. In 2021, Americans put South Korea on the Mt. Rushmore of allies. When asked to identify countries as an ally, partner, rival, or adversary, only four countries were identified as allies by more than 40 percent of Americans: France (52%), Germany (45%), Japan (44%), and South Korea (41%).

Though American views of North Korea remain as cold as ever, the public is less concerned about the country’s nuclear program than it has been in the past. Half (52%) say North Korea’s nuclear program is a critical threat to US security interests, down from 59 percent a year ago and significantly below the high of 75 percent in 2017. That reading occurred during the 2017 North Korean crisis, when North Korea escalated weapons testing leading up to the country’s sixth nuclear test, prompting warnings of “fire and fury” from Donald Trump. 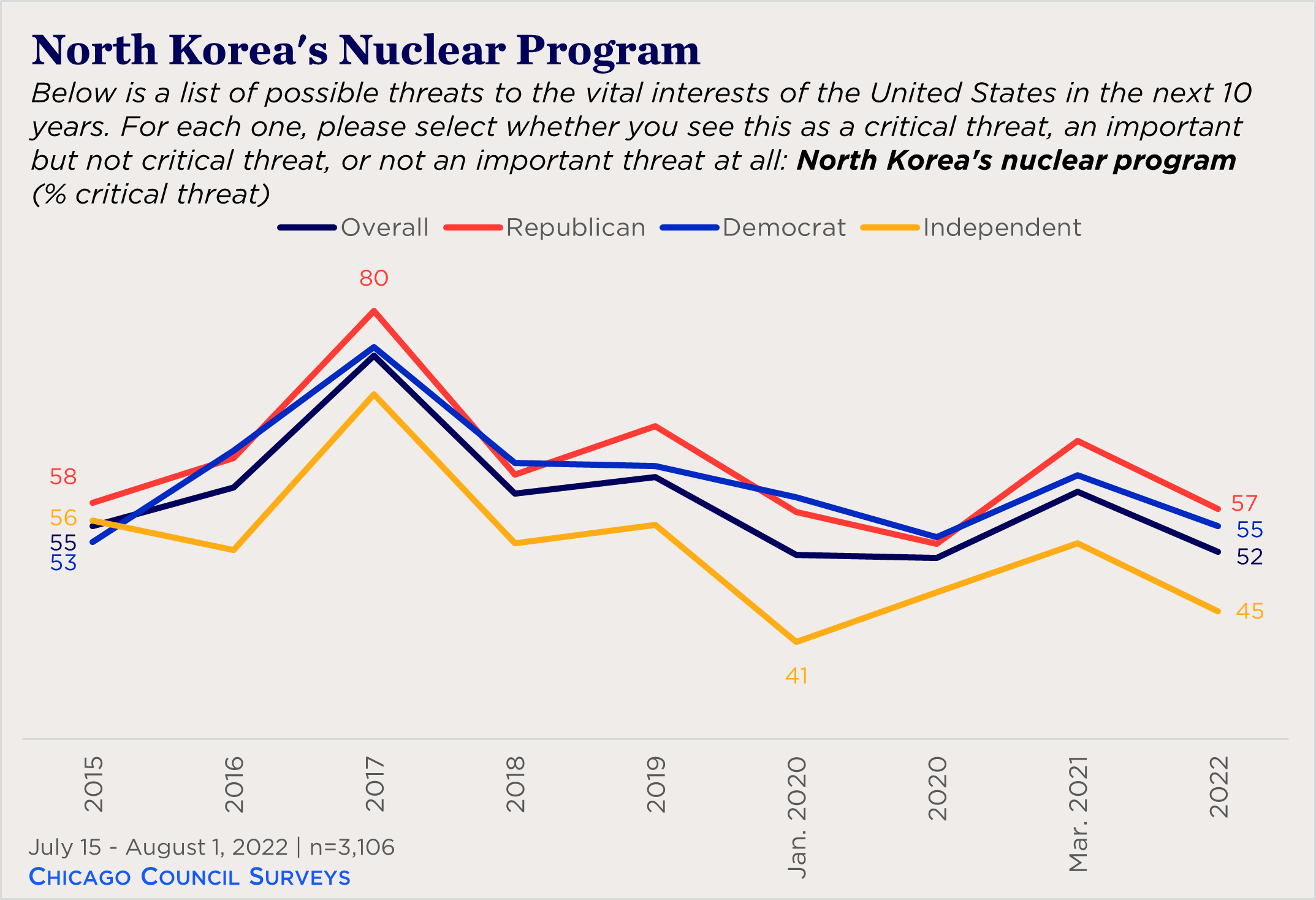 There are likely two drivers of this decline in Americans’ perception of North Korea’s nuclear program as a critical threat.

First, issues involving North Korea have been overshadowed by other pressing events. The most prominent has been Russia’s invasion of Ukraine, which has sharply refocused American attention on Europe. Nor is North Korea the most prominent security issue in Asia. China’s military exercises in the Taiwan strait and growing concern of a Chinese invasion of Taiwan have pushed North Korea further from the headlines. Given a range of policy options in dealing with North Korea’s nuclear program, more than three-quarters of Americans prefer to focus on other pressing problems facing the United States besides North Korea (75%).

Second, even though North Korea is in the midst of its busiest missile testing period ever, most of those tests have been short-range ballistic missiles. Those types of tests do not receive the elevated coverage in American media that ICBM or nuclear tests elicit. Even the intermediate range ballistic missile that overflew Japan—North Korea’s longest-distance test to date—was relatively lightly covered.

There is a growing sense among analysts in the United States that the door to North Korea’s denuclearization is now firmly closed. In a recent New York Times op-ed, the Middlebury Institute’s Jeffrey Lewis argues that the United States needs to “[accept] that North Korea is a nuclear state,” leaving behind policy goals focusing on the denuclearization of North Korea to focus on reducing the risk of nuclear war between the two countries.

The American public is likely divided on the issue. While 50 percent say the United States has to learn to live with countries like North Korea and Iran possessing nuclear weapons, just as we do with Russia and China, 49 percent disagree. Of course, the question language identifies two countries—North Korea and Iran—making it difficult to isolate the question to just North Korea. But acceptance has grown slightly over the last two years; only 44 percent agreed in 2020.

While many might tolerate a nuclear North Korea, these results do not reflect withdrawal in support for the alliance or reluctance to defend South Korea. 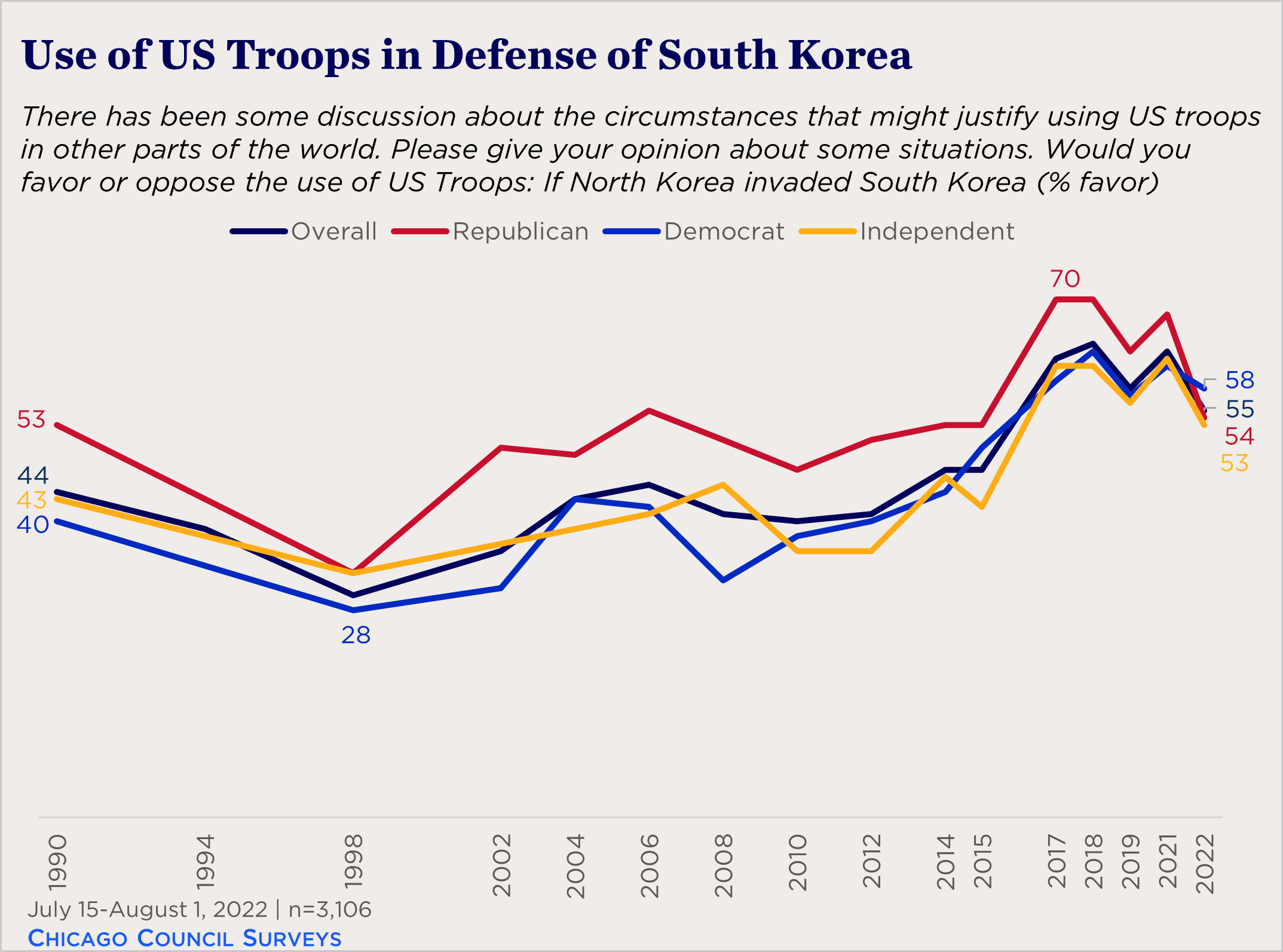 Last year, the Biden administration signaled that it was ready meet with North Korean delegates without preconditions. Those meetings never came about, and any hope of meetings leading to negotiations are now likely dead in the near-term as relations enter an escalatory cycle. But in July 2022, the Chicago Council Survey asked Americans if President Biden should be ready to meet with North Korea’s Kim Jong Un just as Trump did while in office.

A plurality of Americans support a meeting between Biden and Kim, but with significant conditions attached. If they are to meet, 37 percent say such a meeting should only take place if North Korea first agrees to give up its nuclear weapons, and another 26 percent say Biden should not meet with Kim under any conditions. One-third (32%) say Biden should meet him without any preconditions.

More broadly, Americans support a continuation of US sanctions policy. More than three-quarters (75%) favor isolating and pressuring North Korea with economic sanctions so long as it continues its nuclear program (75%). Fewer are interested in reestablishing diplomatic relations (46%) and there is even less appetite for the United States to take military action to force North Korea to give up its nuclear weapons (31%). 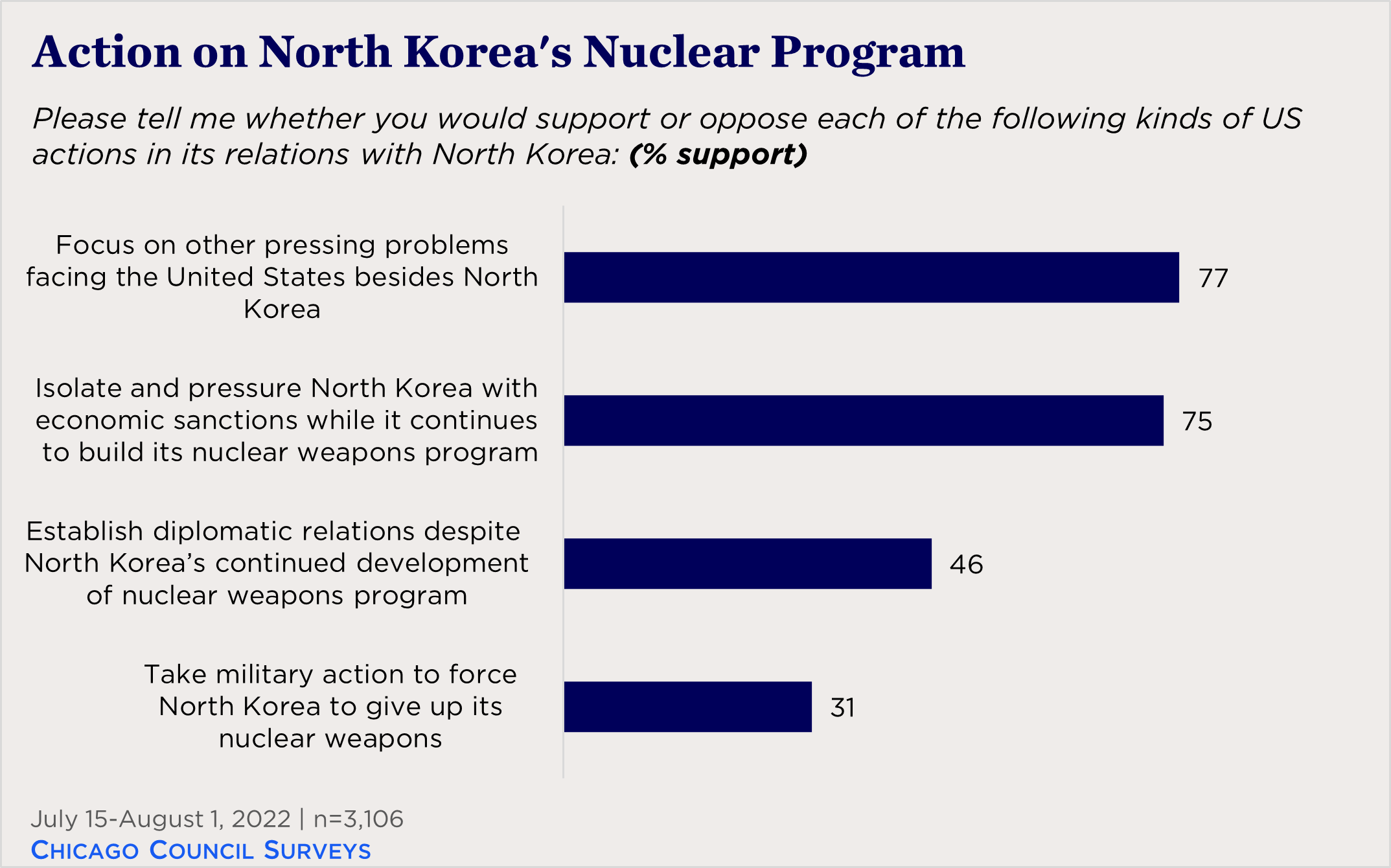 Although tensions on the Korean peninsula continue to rise, Americans are looking elsewhere. While the American public continues to express strong support for South Korea, there is little appetite for policy change or deeper engagement with North Korea. It is unclear if even a seventh nuclear test will really register with the American public. The war in Ukraine and its potential for nuclear escalation will continue to be the foreign policy focus for many Americans, making North Korea and its weapons tests of secondary importance to the American public—and to the Biden administration.

Victor Cha and Sue Mi Terry explain why North Korea's latest missile launches are a sign of impatience with the United States and how to deescalate the situation.