Most Americans Willing to Work with Autocrats to Protect the US

Six in 10 Say Democracy Is Best for All Countries 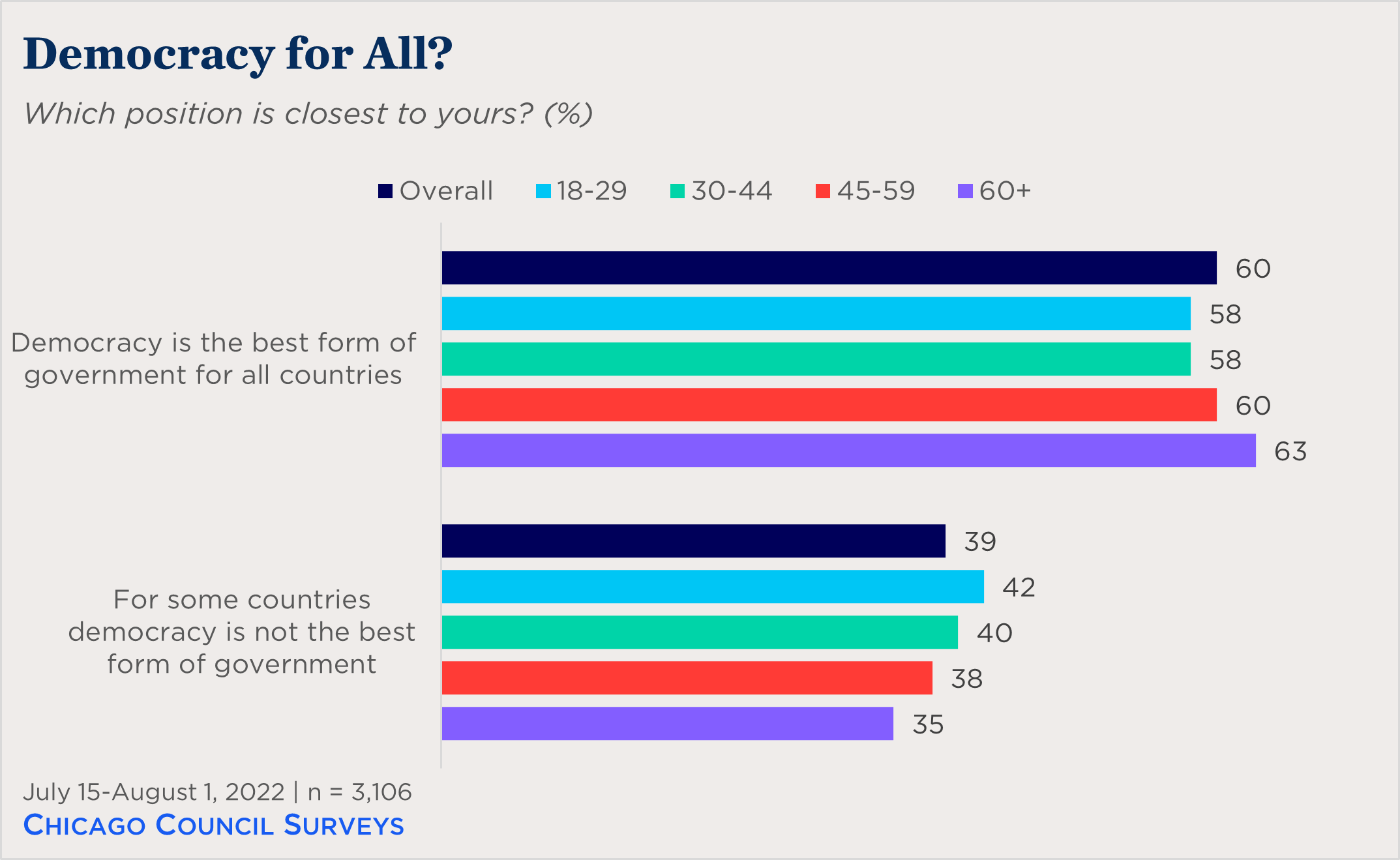 Global Democracy—Nice but Not Necessary

Americans recognize that it is in US interests for other countries to respect the underlying principles of human rights and peaceful international relations. A majority of Americans agree that governments that oppress their people at home are more likely to be aggressive abroad (85% agree) and a majority disagree that the way China treats ethnic and religious minorities within their country is “none of our business” (57% disagree). 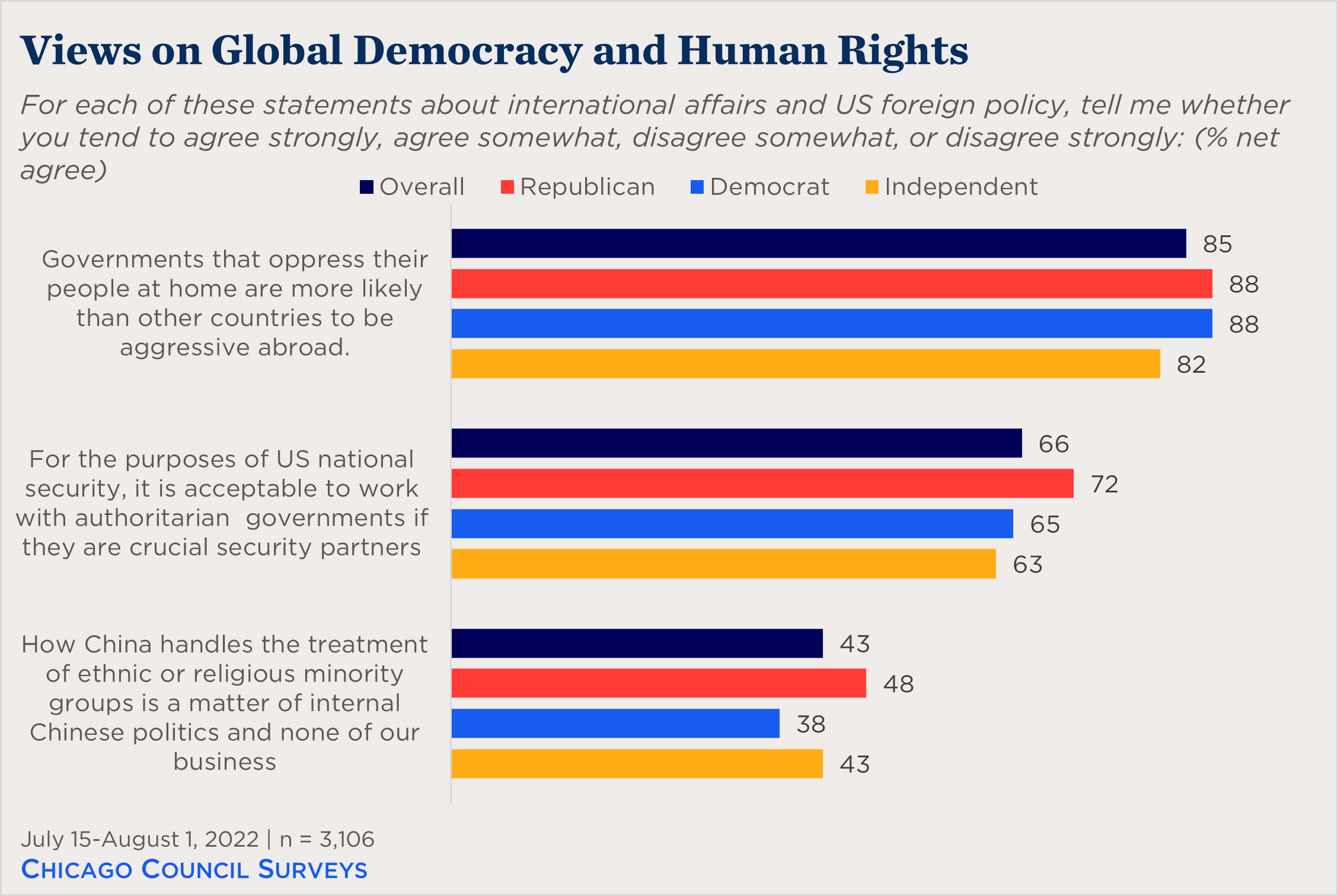 Despite these pro-democracy inclinations, only 46 percent of Americans believe the decline of democracy around the world poses a critical threat to the United States—the third-lowest of all threats included in the 2022 Chicago Council Survey. Moreover, only 15 percent say protecting democratic values and ideals in the world should be the top priority when crafting US foreign policy (compared to ensuring the physical defense of the United States at 30%). 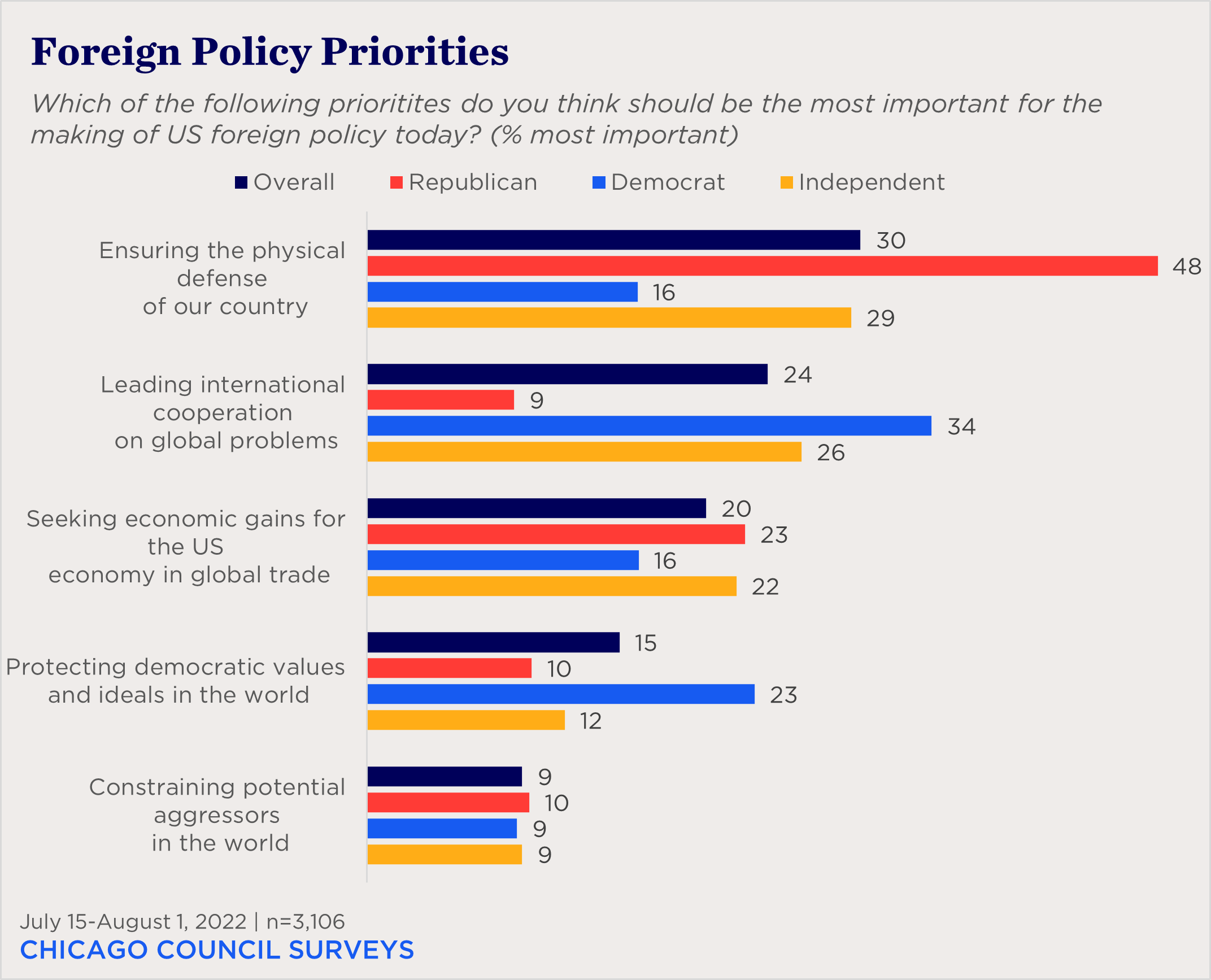 Americans Willing to Work with Non-Democracies to Ensure US Security

The Biden administration recently released its first National Security Strategy (NSS), in which it made the case that foreign governments do not need to be “remade in the American image in order for us to be secure.” For example, in the case of President Joe Biden’s visit to Saudi Arabia this past summer, the White House saw the trip’s objectives—integrating Israel into the region, aligning with Saudis on the status of the Iran nuclear deal, and facilitating a ceasefire between Saudi Arabia and Yemen—as too important to be abandoned over concerns about the regime’s spotty record on human rights and democracy. While some may see this trip and the language in the new NSS as running against the administration’s previously stated aims to promote democracy abroad, the course the administration is charting on this issue seems largely in line with the views of the American public.

Americans seem willing to tolerate the moral tradeoffs of working with undemocratic countries if American national security is at stake. Two-thirds overall, and majorities across party lines, agree with the statement “For the purposes of US national security, it is acceptable to work with authoritarian governments if they are crucial security partners.” And when asked what criteria are important for a US ally to possess, sharing US democratic values (37% very important) ranks below sharing US security (51%) or economic (40%) interests and working with the United States to limit the influence of Russia (49%) or China (44%).

President Biden has made the protection of US democracy a major priority of his presidency, and his administration’s efforts overlap with his broader aim to bolster democracy abroad. For their part, the American public recognize the value of global democracy but are more concerned about protecting US national security than about promoting human rights and democracy abroad. In the policy context, this means that majorities across the political spectrum are willing to accept working with autocrats if it will help protect US national interests.

Democracy is in Danger Worldwide. Here's What to Do.
Podcast Deep Dish on Global Affairs Podcast

Will Biden shift Saudi Arabia from a “pariah” to a partner – should he? Experts Martin Indyk and Sarah Leah Whitson join Deep Dish to discuss.

The presidents of the National Democratic Institute and the International Republican Institute join  Deep Dish  to explain why the United States must promote democracy abroad.

Turkey: Difficult to Live with, Nearly Impossible to Live without
In the News Politico by Ivo H. Daalder