A majority of Americans (69%) say the United States should prioritize ensuring supply chains run through friendly countries, even if this means higher prices. Less than a third (29%) say the United States should prioritize keeping prices as low as possible, even if it means supply chains run through unfriendly countries. Support for this policy, often called ‘allyshoring’ or ‘friendshoring’, is bipartisan: similar majorities of Democrats (71%), Republicans (69%), and Independents (67%) all prefer that the US prioritize having supply chains run through friendly nations. The full range of household incomes also support this approach. While support is lower among households making less than $25,000 a year, majorities at that income level still support the friendshoring approach, despite the potential for increased costs. 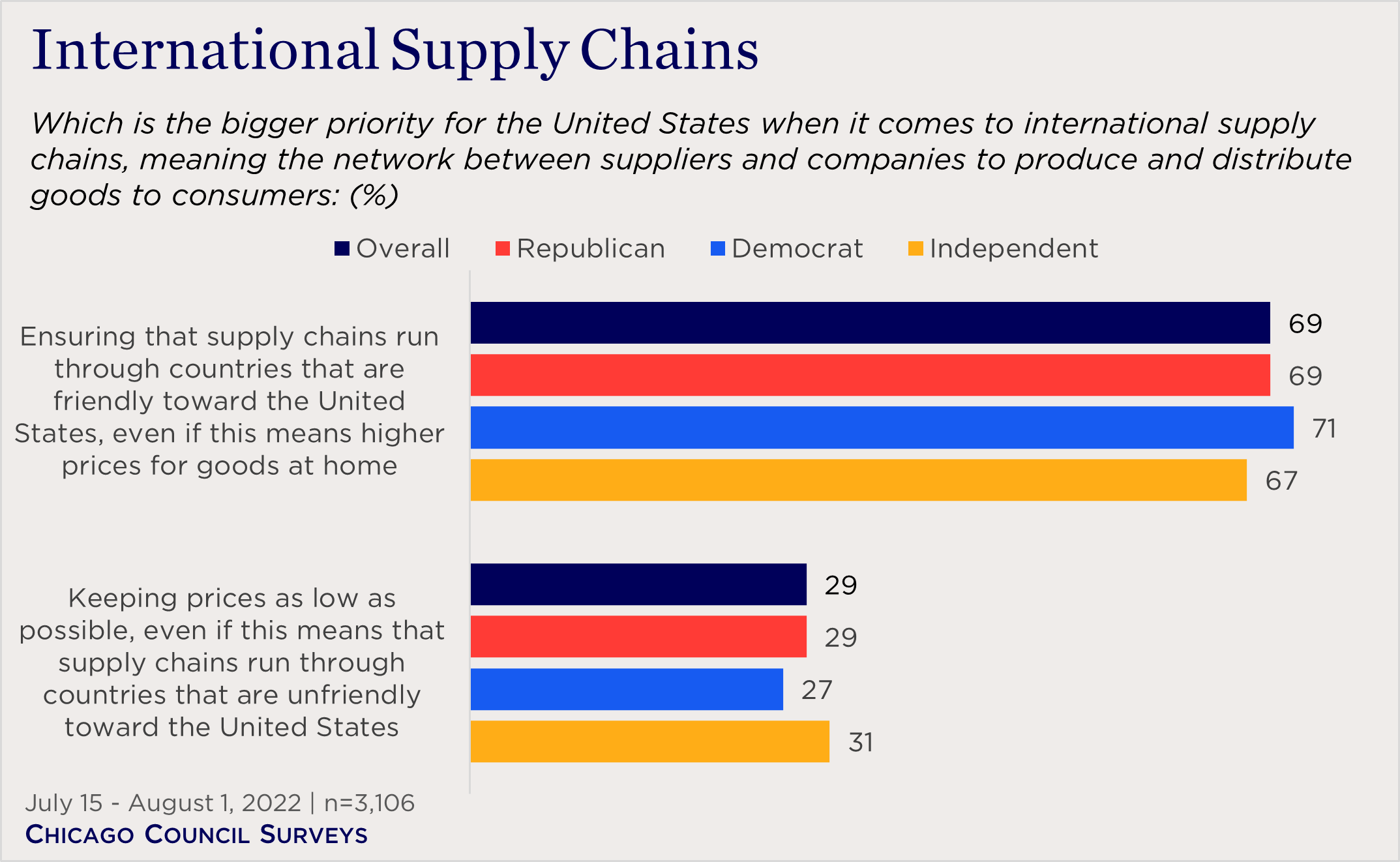 Support for Disconnecting US Supply Chains from Geopolitical Competitors

While supply chain problems in general have affected Americans’ day to day lives since the onset of the COVID-19 pandemic, US government policy is also concerned with securing critical technologies supply chains, limiting US government sourcing from potential rivals, and increasingly, denying access to US portions of that supply chain to American rivals. Chicago Council surveys over the past 18 months have found that Americans are broadly supportive of efforts by to limit exchanges between the United States and countries the public views as geopolitical competitors, such as Russia and China.

Majorities across party lines support prohibiting US companies from selling sensitive high-tech products to either Russia (82%) or China (71%). And majorities also support restrictions on the exchange of scientific research between the US and Russia (61%) and between the US and China (52%). Notably, while support for such restrictions on US-Russia exchange is bipartisan, Republicans and Democrats disagree sharply over a policy of restricting scientific exchange with China. Finally, a narrow majority of Americans (57%) said in 2021 that the US should seek to significantly reduce trade with China, even at the cost of higher costs to American consumers. Here, again, Republicans and Democrats disagree, with Republicans strongly supporting such a disconnection and Democrats narrowly opposed. 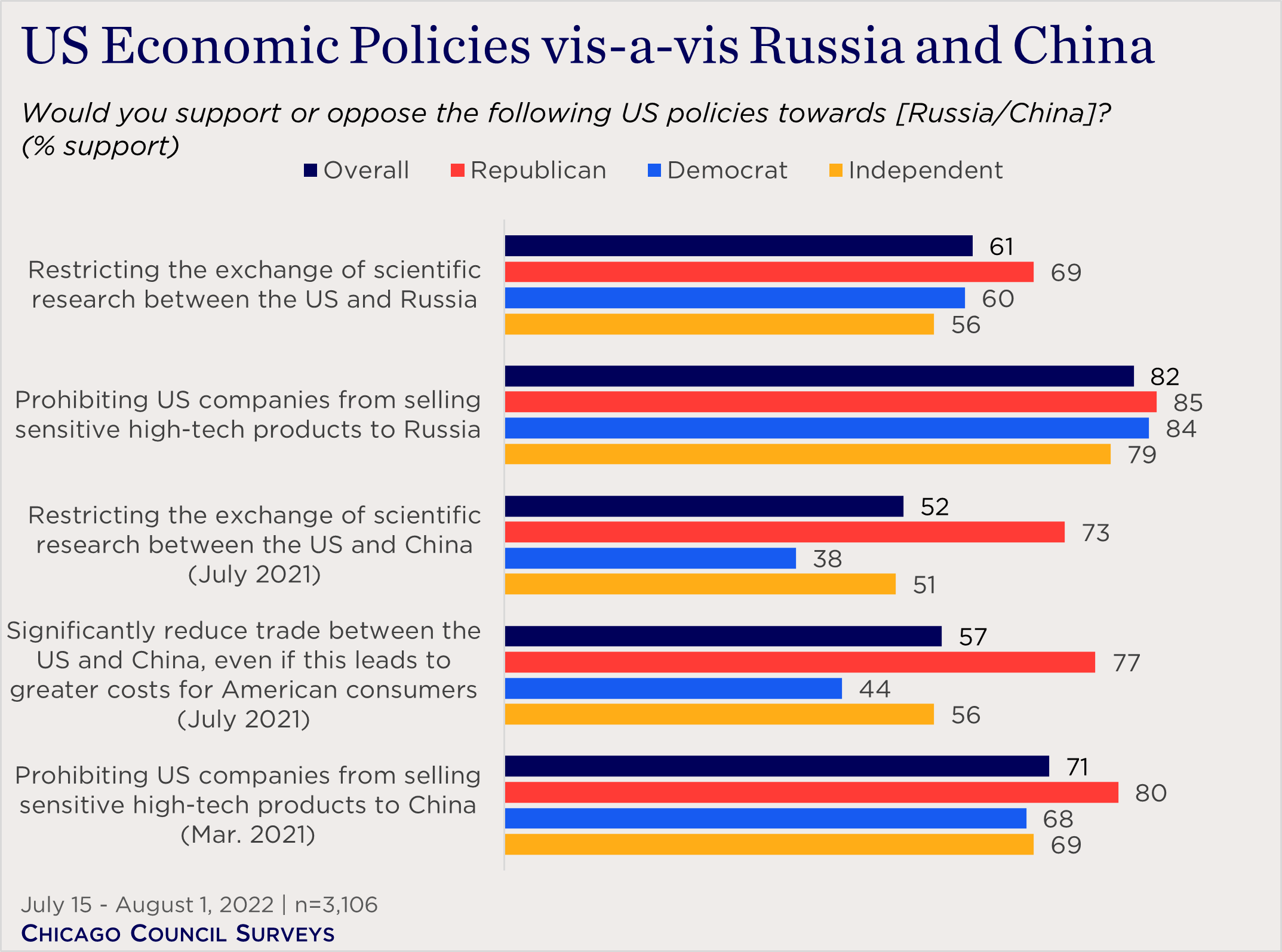 This analysis is based on data from the 2022 Chicago Council Survey of the American public on foreign policy, a project of the Lester Crown Center on US Foreign Policy. The 2022 Chicago Council Survey was conducted July 15–August 1, 2022 by Ipsos using its large-scale nationwide online research panel, KnowledgePanel, in both English and Spanish among a weighted national sample of 3,106 adults aged 18 or older living in all 50 US states and the District of Columbia. The margin of sampling error for the full sample is +/- 1.8 percentage points. The margin of error is higher for partisan subgroups or for partial-sample items.

Exposed: US Supply Chain Vulnerabilities Grew During the Pandemic Era
In the News The National Interest by John Austin

What does one giant boat's ability to halt 10 percent of global trade tell us about our globalized world?

When Intermediary Links in the Supply Chain are Weakened, the Whole Food System Suffers
BLOG Global Food for Thought

Businesses in the center of the value chain are crucial to the food system, and these intermediary links are under threat from the COVID-19 pandemic.

Secure US Supply Chains With Allies, and Move Out of China
In the News Barron's

The Biden Administration should focus on "ally-shoring" to rebuild supply chains and box out actors like China and Russia.