While the Biden administration seems to understand where Americans stand on China and domestic renewal to support global competitiveness, the data disproves their assumptions that Americans are skeptical about trade and weary of US global engagement and leadership.

A Foreign Policy for the Middle Class—What Americans Think

Majorities of Americans consider improving public education (73%), strengthening democracy at home (70%), and reducing both racial (53%) and economic (50%) inequality as very important to maintaining America’s global influence. Similarly, Americans are more concerned about threats within the United States (81%) than threats outside the country (19%). 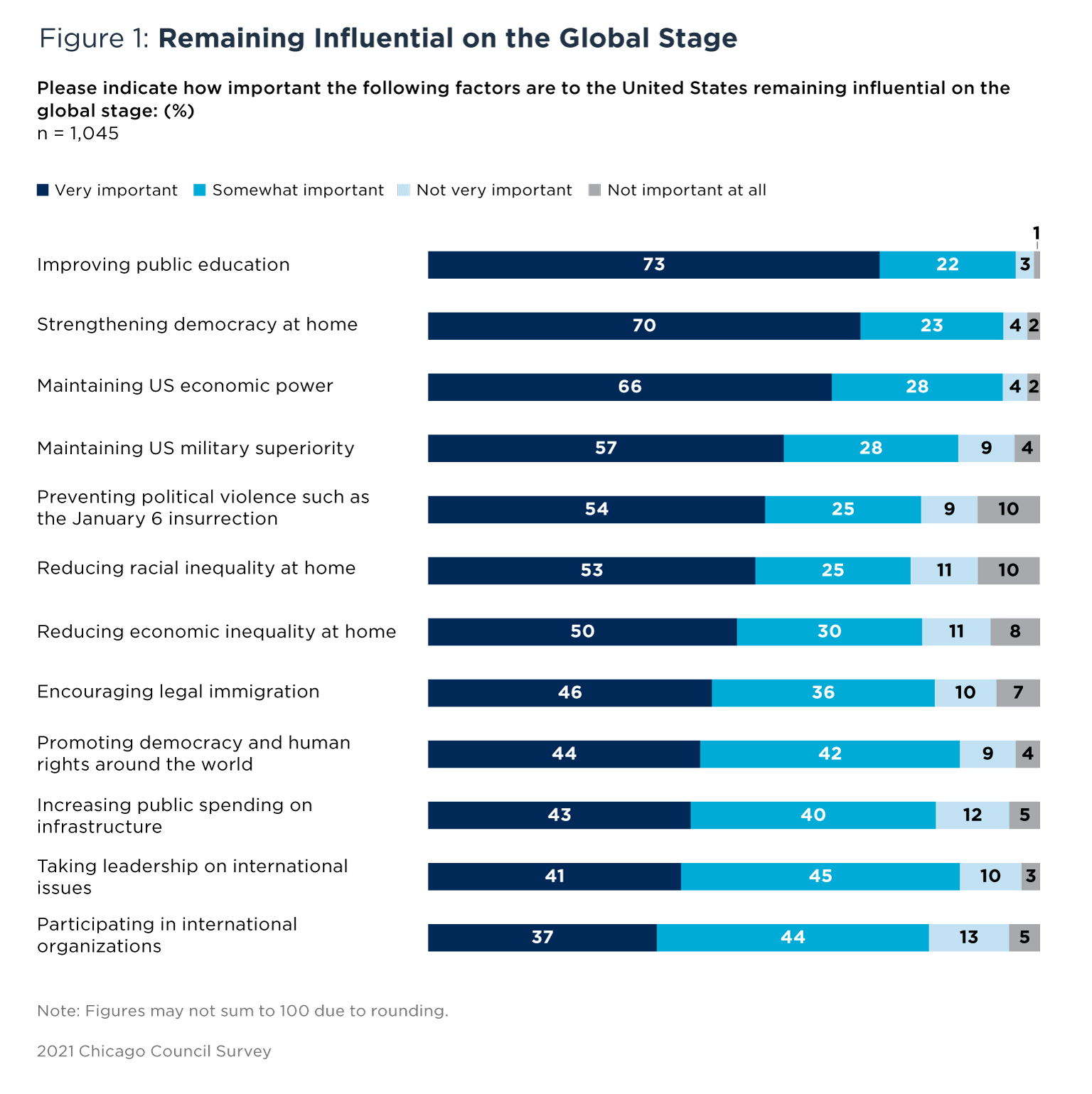 The Biden administration has presented its policies as part of a strategy to face the challenges to US prosperity, security, and democratic values “by our most serious competitor, China.” American concern about competition from China is broad:  for the first time in Council polling, less than half of Americans (46%) say the United States is stronger than China in terms of military power. A plurality of Americans (40%) say China is economically stronger than the United States. In a dramatic shift from 2019, a majority of Americans now say that trade between the two nations does more to weaken US national security (58%, up from 33% in 2019).

This represents a majority of respondents, a dramatic shift from 19 percent in 2019.

However, there are policy areas in which the administration’s assumptions about the public do not bear out.

Administration officials have conceded that some of the benefits of globalization and international trade have not been shared by all Americans, and that this may have caused some Americans to become disillusioned with the concepts. Yet the 2021 Chicago Council Survey shows that a record number of Americans (68%) now say globalization is mostly good for the United States, and three-quarters or more consider international trade to be beneficial to consumers like them, their own standard of living, US tech companies, the US economy, and US agriculture.

While the Foreign Policy for the Middle Class calls for a formidable US return to the global stage, some US officials seem to think the US public is skeptical of international engagement. But 64 percent of Americans say they want the United States to take a leading role in addressing many of the world’s most pressing challenges, including climate change and the COVID-19 pandemic. Despite supporting the US withdrawal from Afghanistan at the time of polling, Americans also favor maintaining the existing US military presence around the world. They are as likely—or even more likely—to support the use of US troops to defend allies like Taiwan and Ukraine around the world.

in addressing many of the world’s most pressing challenges, including climate change and the COVID-19 pandemic.

Crown Center Content This content is produced by the Lester Crown Center, which aims to shape debates and inform decisions on important US foreign policy and national security issues.
Learn More

About the 2021 Chicago Council Survey

The Chicago Council Survey, conducted every four years since 1974, biennially since 2002, and now annually, is a trusted and widely cited source of longitudinal data on American public opinion about a broad range of US foreign policy and international issues.

The 2021 Chicago Council Survey is made possible by the generous support of the Crown family and the Korea Foundation.

The 2021 Chicago Council Survey, a project of the Lester Crown Center on US Foreign Policy, is the latest effort in a series of wide-ranging surveys on American attitudes toward US foreign policy.

The survey was conducted from July 7 to 26, 2021, among a representative national sample of 2,086 adults. The margin of sampling error for the full sample is +/- 2.33 percentage points, including a design effect of 1.1817. The margin of error is higher for partisan subgroups or for partial-sample items. Partisan identification is based on respondents’ answers to a standard partisan self-identification question: “Generally speaking, do you usually think of yourself as a Republican, a Democrat, an independent, or what?”

For full details, including the survey methodology, please download the pdf version of the report.

Ivo H. Daalder served as the US ambassador to NATO from 2009 to 2013 prior to becoming President of the Council. Previously, he was a senior fellow in foreign policy studies at the Brookings Institution and served as director for European affairs on President Bill Clinton’s National Security Council. He is the author or editor of 10 books.

Karl Friedhoff was a Korea Foundation-Mansfield Foundation US-Korea Nexus Scholar and a member of the Mansfield Foundation’s Trilateral Working Group prior to joining the Council. Previously, he was a program officer in the Public Opinion Studies Program at the Asan Institute for Policy Studies based in Seoul, South Korea.

2021 Chicago Council Survey data show a majority of Americans support a range of US policies towards Taiwan: recognition as an independent country, inclusion in international organizations, and a US-Taiwan free trade agreement.

The American public is increasingly skeptical of the US-China trade relationship, and narrow majorities support increased restrictions on both trade and technological exchanges.

On the heels of Ukrainian president Zelenskyy’s meeting with US President Biden, the 2021 Chicago Council Survey finds that a record 50 percent of Americans favor the use of US troops if Russia were to invade the rest of Ukraine.