The Taliban’s recent advances in Afghanistan, capturing six provincial capitals in less than a week, have highlighted the impact of the US military withdrawal there and have thrown the future of the country into question. While several outspoken critics have objected to President Biden’s decision to withdraw all troops from Afghanistan, the just-completed 2021 Chicago Council Survey, fielded July 7-26, shows that seven in ten Americans continue to back this decision.

When asked whether they support or oppose the decision to withdraw US forces from Afghanistan by September 11, 2021, the 2021 Chicago Council Survey finds that 70 percent of Americans support it (29% oppose). This support spans partisan affiliations, though larger majorities of Democrats (77%) and Independents (73%) than Republicans (56%) agree. 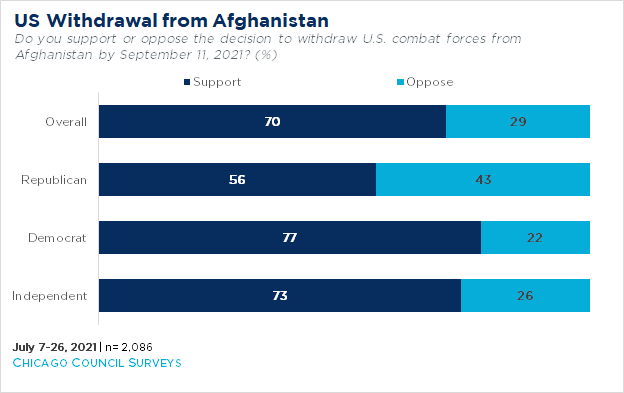 These results corroborate the findings of other polls conducted over the past several months. A May Quinnipiac poll found that 62 percent approved of President Biden’s decision to withdraw all US troops from Afghanistan by September 11 of this year, and an April Economist/YouGov poll found that 58 percent approved of the plan for withdrawal by September 11. The Economist/YouGov poll also found that majorities in military households (61%) and just over half of those currently serving in the military (52%) or those who served in the past (53%) supported the withdrawal.

American attitudes toward Afghanistan are somewhat sensitive to wording as well as policy. An April 2021 Fox News poll found that more Americans said the United States should keep some troops in the country for counterterrorism operations (50%) than said that the US should remove all troops from the country (37%). And even though a solid majority of Americans in the 2021 Chicago Council Survey support the troop withdrawal, as recently as last January a Chicago Council poll showed that Americans were equally divided on whether the United States should have (48%) or should not have (49%) long term bases there. However, at the same time, two-thirds said that the war in Afghanistan had not been worth the costs (65%, 32% worth it).

For a longer-term look at attitudes toward US policy in Afghanistan, Karlyn Bowman offers a comprehensive summary.