Great power competition is the organizing principle of President Biden’s new National Security Strategy. Is the American public on board?

The G20 Summit and the Era of Managed Competition

US President Joe Biden’s meeting with China’s Xi Jinping at November’s G20 summit offered a glimpse into the new logic of great power competition. While the United States sought to resume dialogue and improve ‘guardrails’ within the tense relationship with China, both powers’ positions on key disagreements—including over Taiwan, the Russian invasion of Ukraine, economic coercion, and human rights—remained unchanged. Perhaps the clearest signs of fraying great power ties were the absences on the agenda. Sharply criticized over the Russian invasion of Ukraine, Vladimir Putin skipped the event, and the traditional “family photo” of national representatives was canceled after Western leaders refused to appear with Russian Foreign Minister Sergei Lavrov.

Indeed, “vigorous,” managed competition with Russia and China is the cornerstone of the National Security Strategy (NSS) released in October. Results from the 2022 Chicago Council Survey show that the Biden administration’s focus reflects Americans’ deep concerns about both countries: perceptions of threats from Russia and China have increased, while worries about terrorism have receded. But while Americans support sanctions, security assistance, and other policies in response to current and potential crises due to Russia and China’s postures, the public endorses a supporting rather than leading US role in combatting Russia and China’s influence.

American Views of Russia and China Have Hit Record Lows

The National Security Strategy articulates a dark view of Russian and Chinese ambitions, characterizing Russia as an “immediate threat” to the rules-based order and China as a revisionist power that aims to displace the American-led international system. This comes as little surprise: the 2017 NSS and 2021 interim strategic guidance documented growing distrust of both countries in Washington.

The American public shares these negative views of Russia and China, and declining favorability of both countries has mirrored worsening tensions. Asked to rate the warmth of their feelings toward Russia and China from 0 to 100, Americans rate Russia 22 and China 32, the lowest since the question was first asked in 1978. 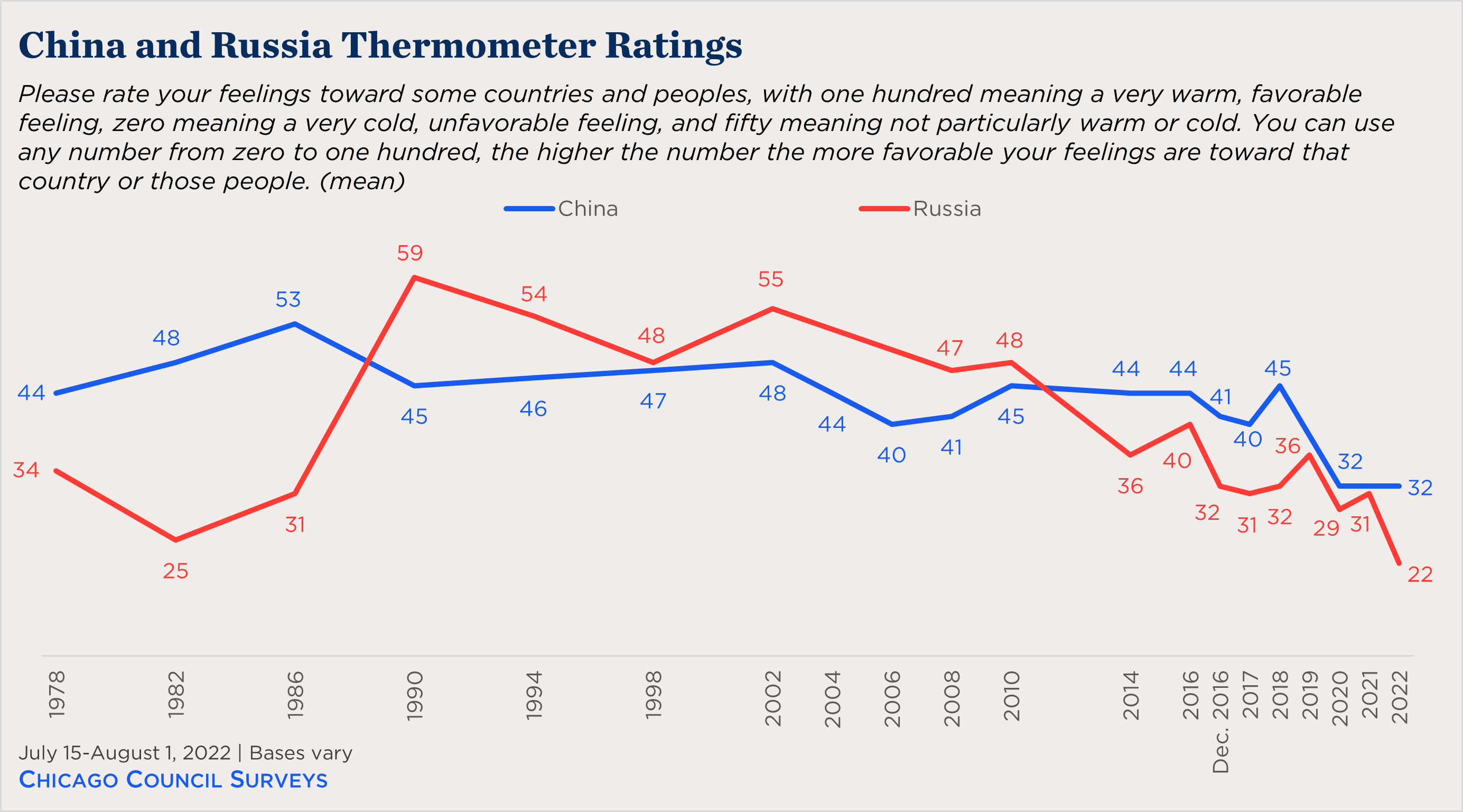 At the same time, disputes with China—over Taiwan, access to sensitive technologies, and China’s treatment of Uyghurs, among other issues—appear to have placed unprecedented strain on Americans’ views of the relationship. The 13-degree drop in warmth from 2018 to 2022 is substantially greater than declines that have followed previous rifts, including the 1989 Tiananmen Square protests and the Third Taiwan Strait Crisis in 1996. When the 2015 National Security Strategy declared that “the United States welcomes the rise of a stable, peaceful, and prosperous China,” only four in 10 Americans viewed China’s development as a critical threat. Nearly six in 10 do today (57%). 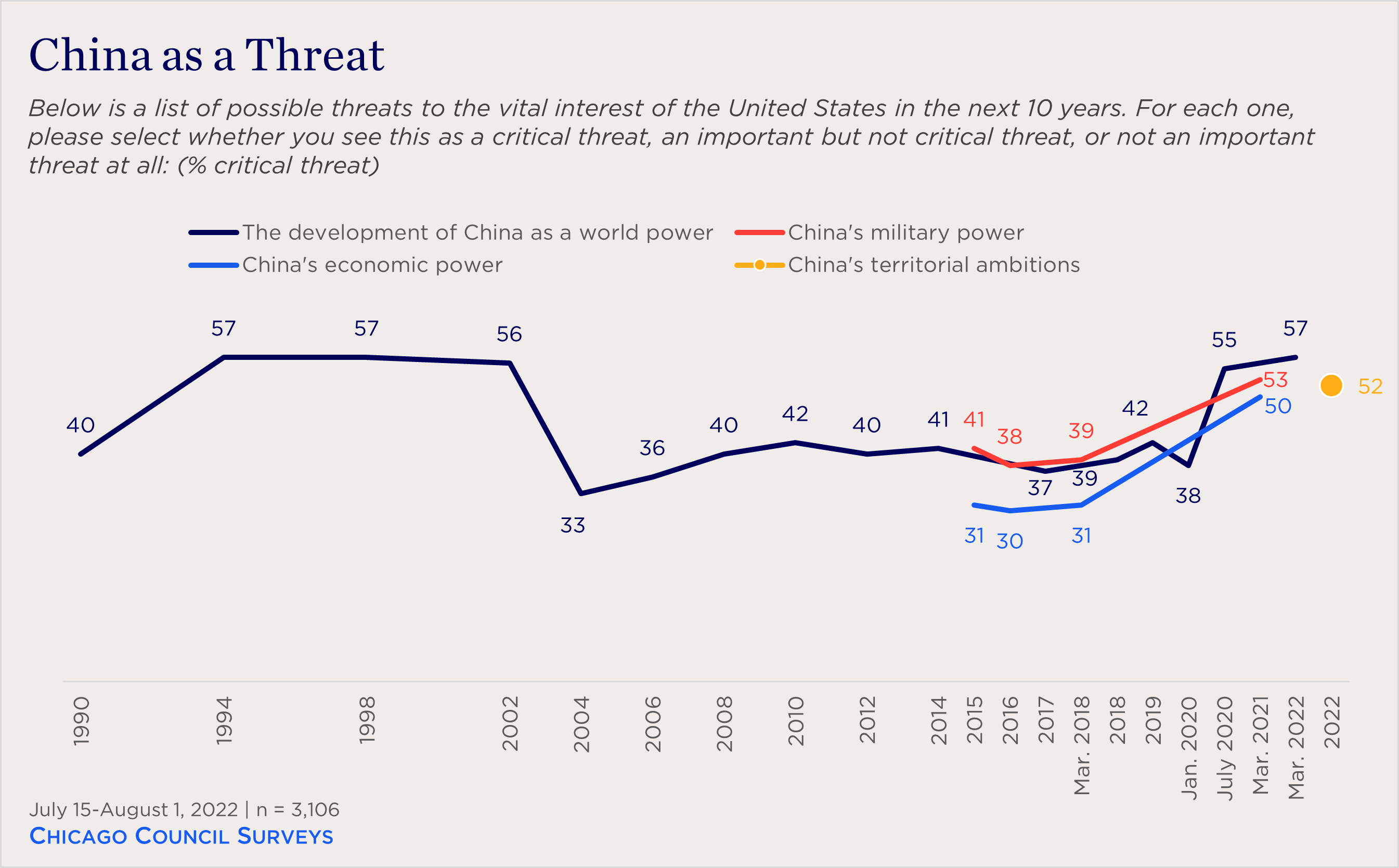 Broadly, the NSS describes China and Russia as rivals and strategic competitors while emphasizing that they pose distinct challenges to American interests. While the Trump administration’s 2017 National Security Strategy portrayed China and Russia as a “revisionist” bloc with similar aims, the Biden administration differentiates Russia as a more immediate threat and China as the United States’ longer-term “pacing challenge.”

On both counts, the American public agrees. Three in 10 see China as a rival (31%) and two in 10 as an adversary (22%). But Americans are more likely to see Russia as an adversary that the United States is in conflict with (57%), up from 39 percent in 2021.The public is also somewhat more likely to view Russia’s territorial ambitions as a critical threat (60%) than China’s territorial ambitions (52%). 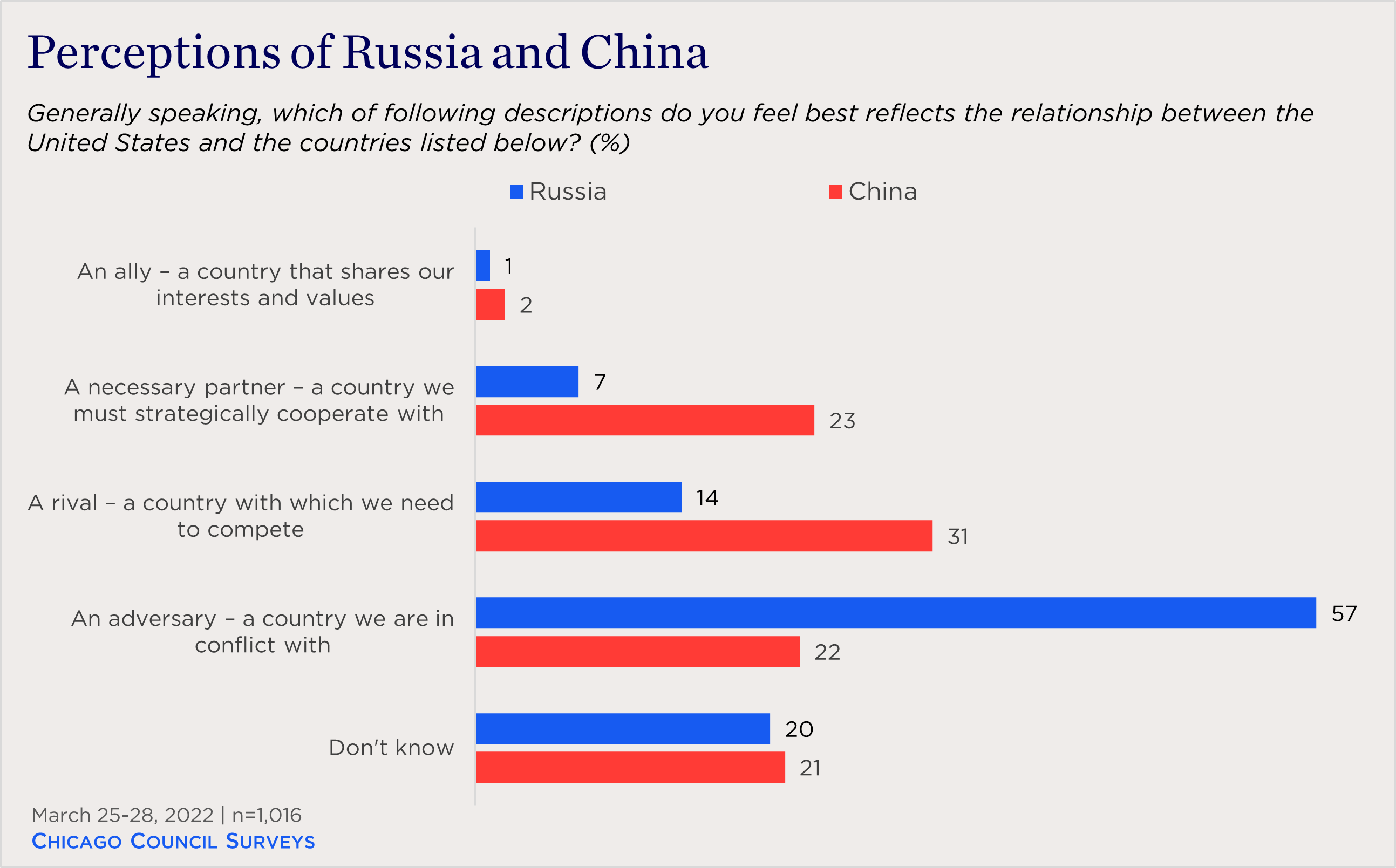 In its emphasis on great power competition, the Biden administration is also pivoting away from the Middle East and the dominant focus on terrorism that followed the September 11 attacks. While acknowledging that nonstate actors pose an enduring threat, the NSS calls for a transition from leading counterterrorism efforts to supporting partner-led efforts and criticizes military-centric Middle East strategies of past administrations.

This strategic reorientation is in line with Americans’ decreasing concern about terrorism, with the percentage of Americans who consider terrorism to be a critical threat falling from 75 percent in 2017 to 58 percent today. Americans considered international terrorism to be the top critical threat to the country as recently as 2019, but that top spot has been overtaken by the COVID-19 pandemic, domestic violent extremism, disruption in the energy supply, and Russia’s territorial ambitions in various recent years. 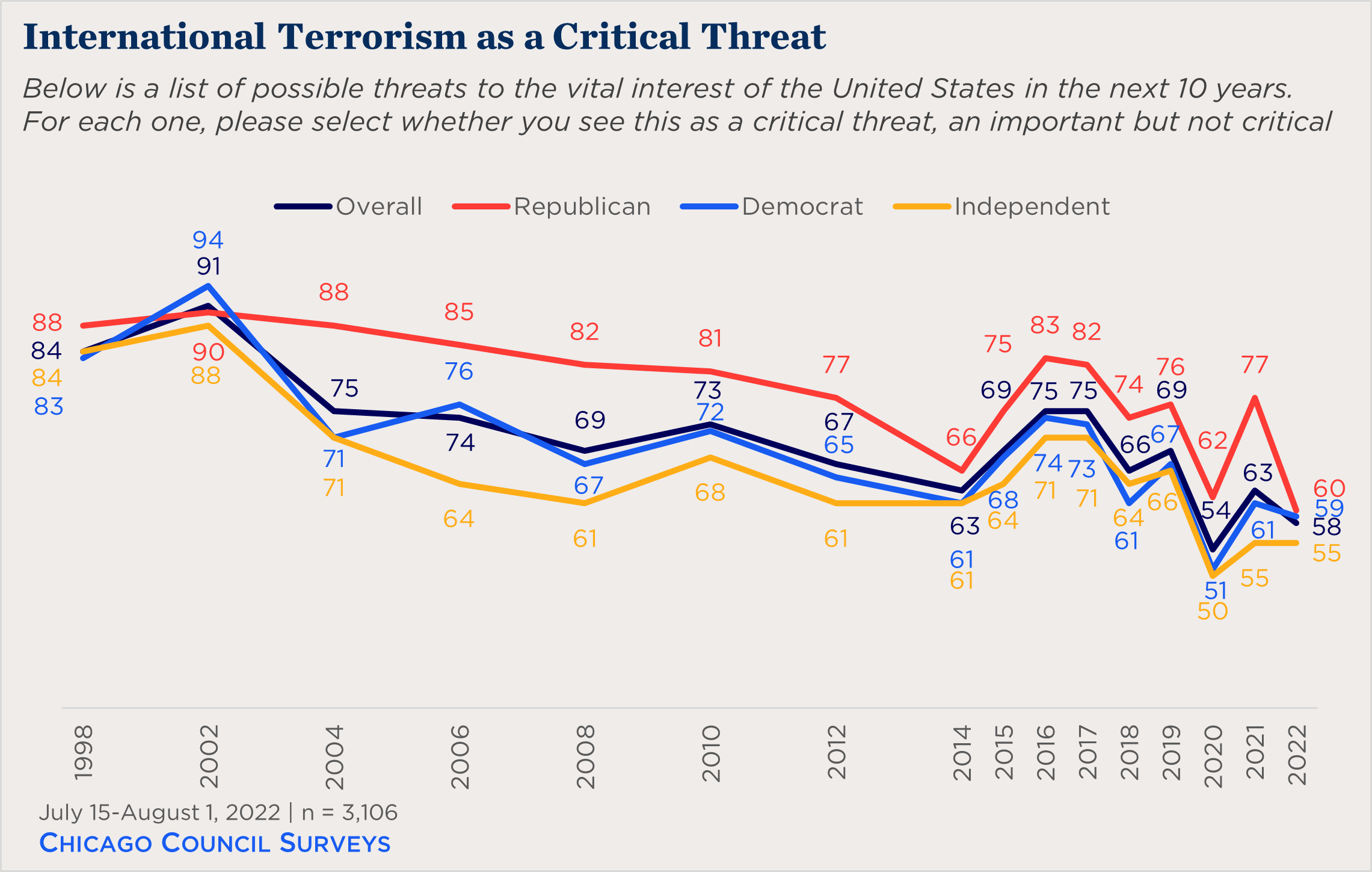 Although it urges a more limited, over-the-horizon approach to combatting external terrorism, the NSS acknowledges “sharply increased” threats from domestic terrorism. In this sense, the public is also looking inward. In 2022, more than four-fifths of Americans reported being more concerned about internal threats (82%) than external ones (17%).

Americans Support Sanctions and Other Policy Responses to Crises, but are Wary of Broader Confrontation

On Taiwan and Ukraine, where the risk of great power confrontation is most manifest, the NSS largely continues recent US policy. With respect to Taiwan, it reiterates longstanding opposition to unilateral political changes or military escalation, while offering few policy specifics. But for Ukraine, which is mentioned 32 times, the Biden administration pledges security assistance, assistance to refugees, and sanctions on Russia’s strategic industries, having previously ruled out direct military involvement.

These policies are popular responses to crises among the public. Americans endorse sanctions in response to military aggression and human rights: Eight in 10 Americans back sanctions against Russia for its invasion of Ukraine (80%), although only a minority believe that sanctions will compel Russia to end its invasion (40%). A similar proportion would support sanctions if China were to invade Taiwan (76%), and Americans give bipartisan support for sanctions over China's treatment of minorities and human rights violations.

Security assistance and arms sales draw similarly broad support. Seven in 10 want the United States to send additional arms and military equipment to Ukraine (72%). And if China were to invade Taiwan, majorities support arms shipments (65%) and using the US Navy to prevent a blockade (62%). These parallels in preferred policy options are not altogether surprising, considering that the public considers Russia and China’s challenges to territorial norms to be related. More than three in four believe that the Russian invasion of Ukraine is likely to encourage a Chinese invasion of Taiwan (76%).

Broadly, security assistance and economic support are widely preferred to more direct military engagement. Americans are wary about armed confrontation with Russia and China; when presented with other options, fewer than four in 10 Americans support sending troops to Taiwan (40%) or Ukraine (38%) to help defend against invasion. 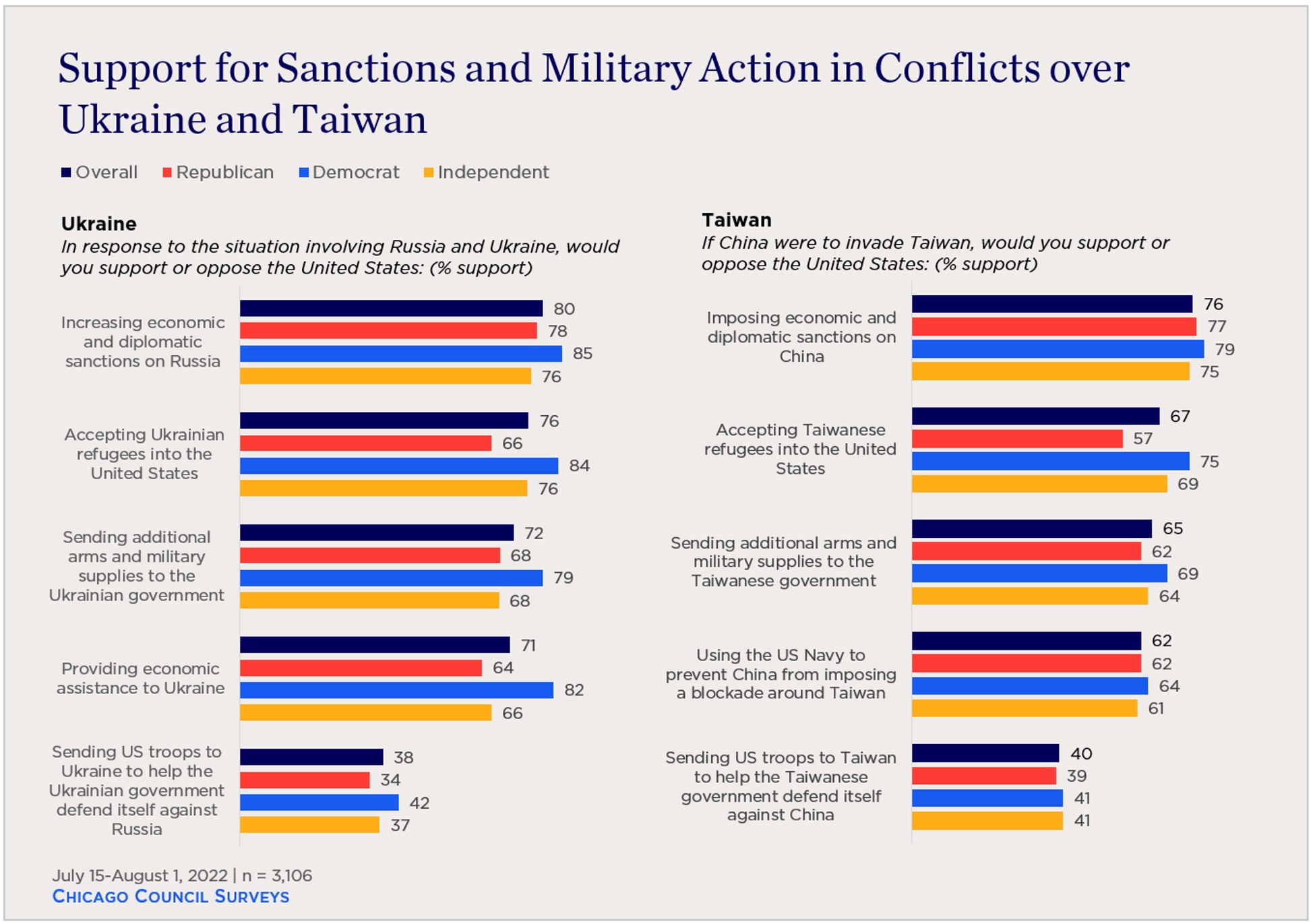 However, public support is less clear when it comes to the National Security Strategy’s broader focus on competition and the leading role it sees for the US in shaping a global response. The NSS names “out-competing China and constraining Russia” as guiding objectives. But constraining potential aggressors in the world is not a top foreign policy focus for Republicans or Democrats, with only one in 10 counting it as the most important priority. 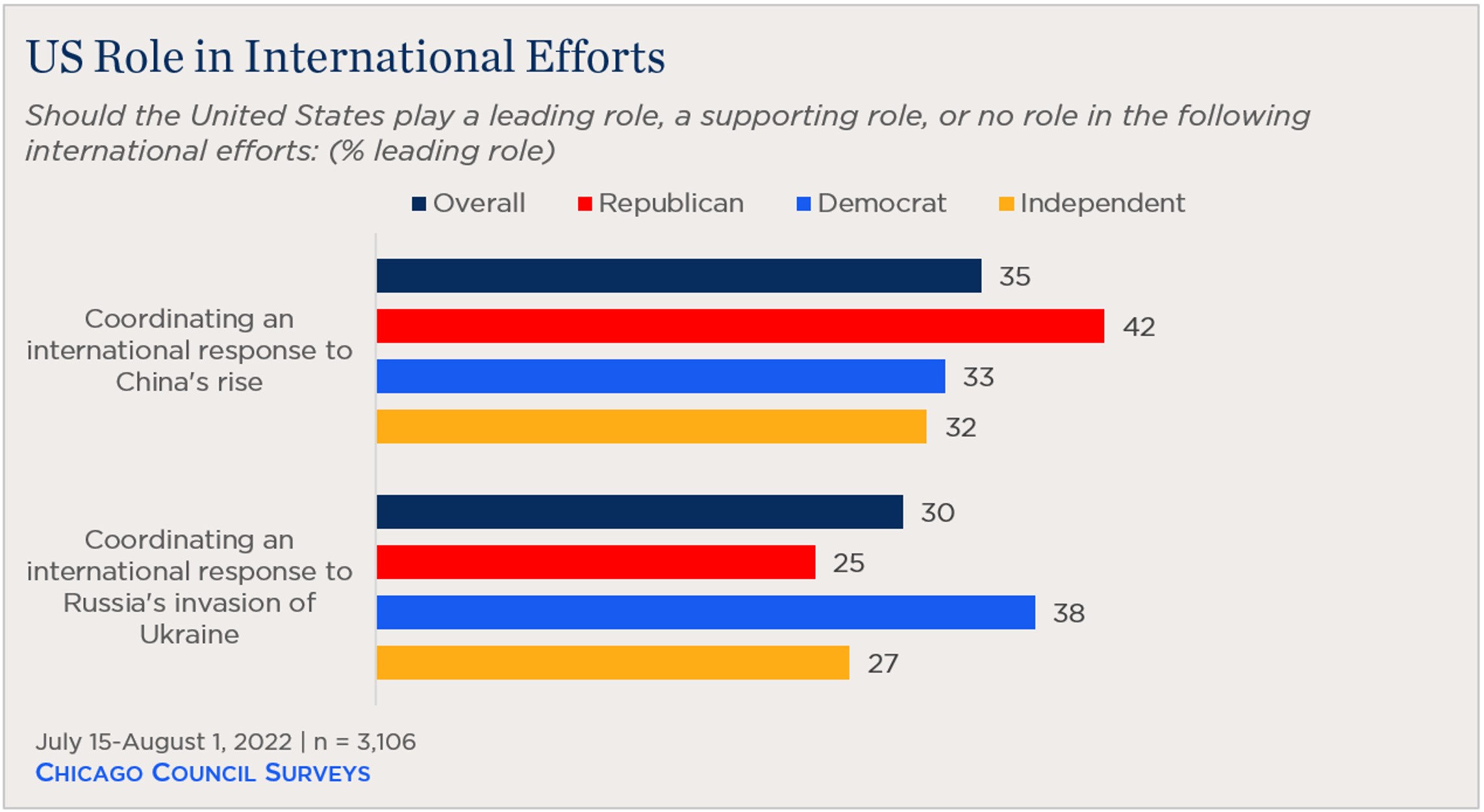 This year’s National Security Strategy is blunt about the shifting international environment, stating that the “post-Cold War era is definitively over.” The Russian invasion of Ukraine and mounting tensions over Taiwan have underscored that point, focusing minds on the threat posed by rival great powers. Time will tell whether the American public endorses a concerted, global contest against China and Russia. For now, it is looking at both domestic threats and the challenge posed by Beijing and Moscow with clear concern.

Phillip Meng joined the Council in September 2022 as an intern on the public opinion team.

American feelings toward Russia and China are lower than during the Cold War, Council polling shows.

With Xi Jinping poised to receive a third term at the 20th Party Congress, American opinion of China has never been worse.

The majority of countries polled in a recent 53-nation study hold negative views of Russia following its invasion of Ukraine.

If the United States and China are competing over global public opinion, who’s winning, and where?