President Jair Bolsonaro might be leaving office, but the country’s political trust issues are far from resolved.

Brazil's October 2022 elections saw former President Luiz Inacio Lula da Silva, commonly known as Lula, return to power after stepping down in favor of his political successor Dilma Rousseff in 2011. With a slim 50.9 percent majority of the vote, Lula beat out incumbent President Jair Bolsonaro, whose approval rating was 38 percent. Many of Bolsonaro's policies, particularly his handling of the COVID-19 pandemic, were widely unpopular. Liberals in Brazil and abroad cheered the result of the 2022 elections as a win for democracy and human rights in Brazil. Still, it remains to be seen whether removing Bolsonaro will be enough to resolve the country’s sociopolitical issues. Lula will inherit several serious challenges, chief among them low confidence in Brazil's government and democratic systems. 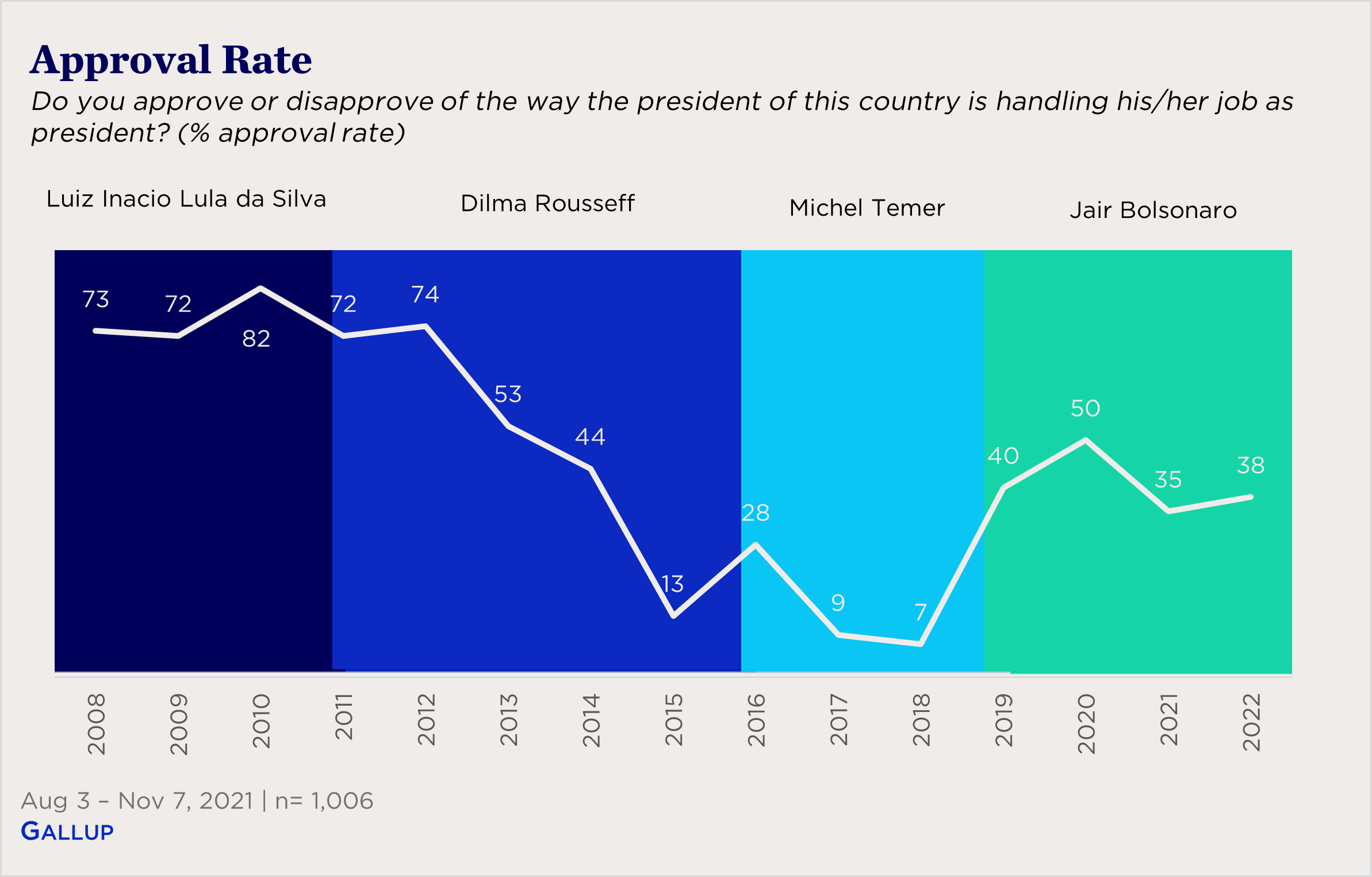 A component of Bolsonaro's legacy is his methodically cultivated myth of stolen elections, part of a greater trend of election denialism among right-wing populist leaders around the world. While in office, Bolsonaro created and promoted false narratives that cast doubt on the integrity of Brazil's elections, including a theory that election officials manipulate results by counting votes in secret, and that hackers tried to prevent him from winning the 2018 election. While there is no evidence to support these claims, they have undermined millions of Bolsonaro supporters' faith in the election process.

Bolsonaro’s false narratives had a rich soil to grow in, as Brazilians have never trusted the honesty of their national elections. In fact, high levels of electoral mistrust during Bolsonaro's term were part of a trend. As Gallup polling shows, mistrust in Brazilian elections has been consistently above 60 percent since 2006. The period between 2013 and 2018 when mistrust was the highest coincides with Rousseff's impeachment and the tenure of Michel Temer, her former vice president, who held office until the 2018 elections. Confidence in the honesty of Brazil's elections actually declined slightly once Bolsonaro came to power in 2019. 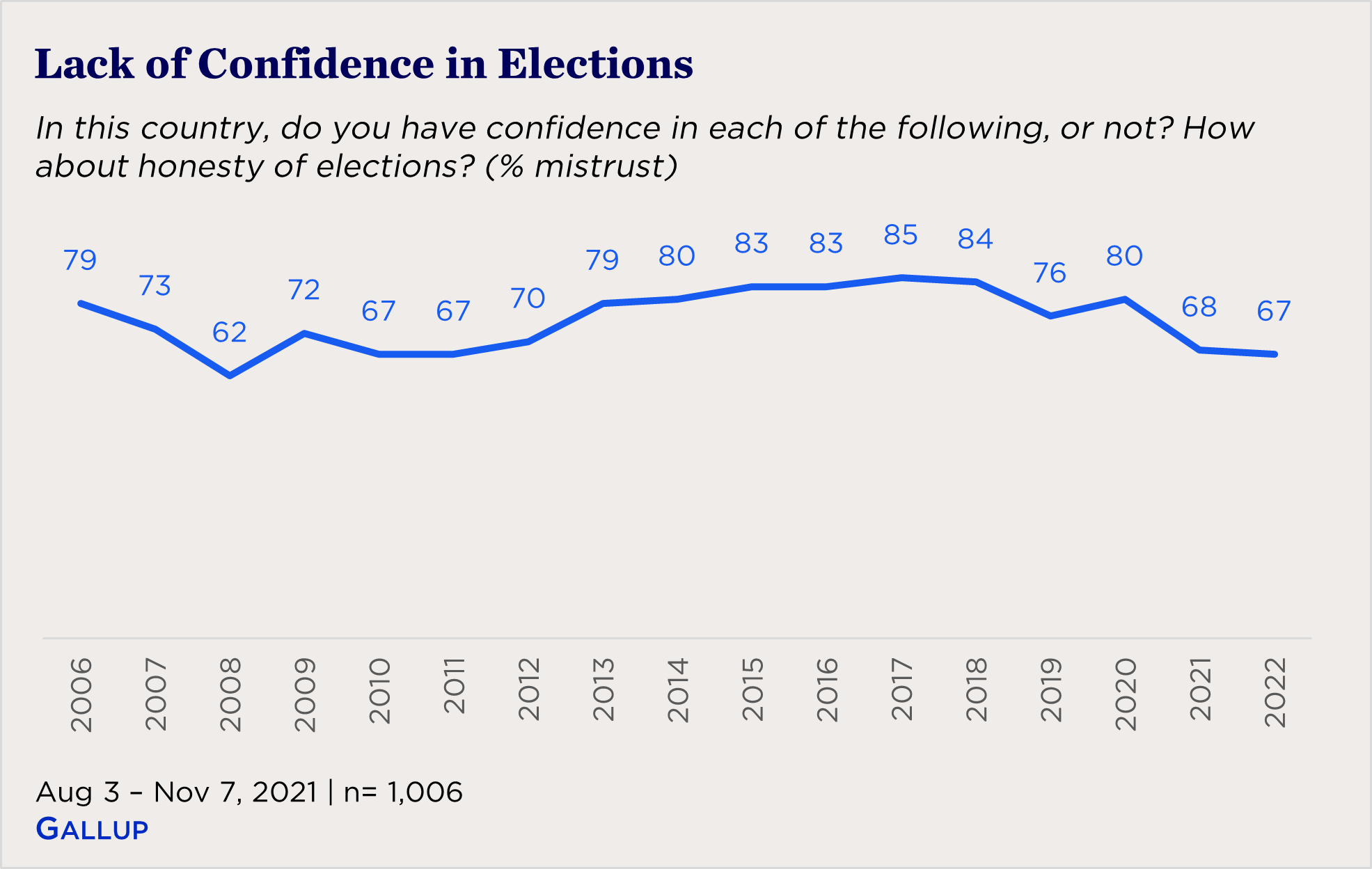 Low confidence in elections is just one indicator of a broader sentiment of pessimism about democracy in Brazil. A poll by the Latinobarómetro in 2020 found that 46 percent of Brazilians view democracy as preferable to any other kind of government. The data also shows a significant increase in people moving away from a pro-democratic stance and adopting the opinion that for people like them, "it does not matter whether we have a democratic or a non-democratic regime." This shift in 2015 coincides with the revelation of large-scale corruption and public scandals, which could have shaken people’s faith in democracy. As a result, in 2020, the Latinobarómetro indicated that 41 percent of Brazilians are ambivalent toward democracy. This suggests that a significant portion of the population does not view democracy as a chance to have their voice heard and their interests represented. 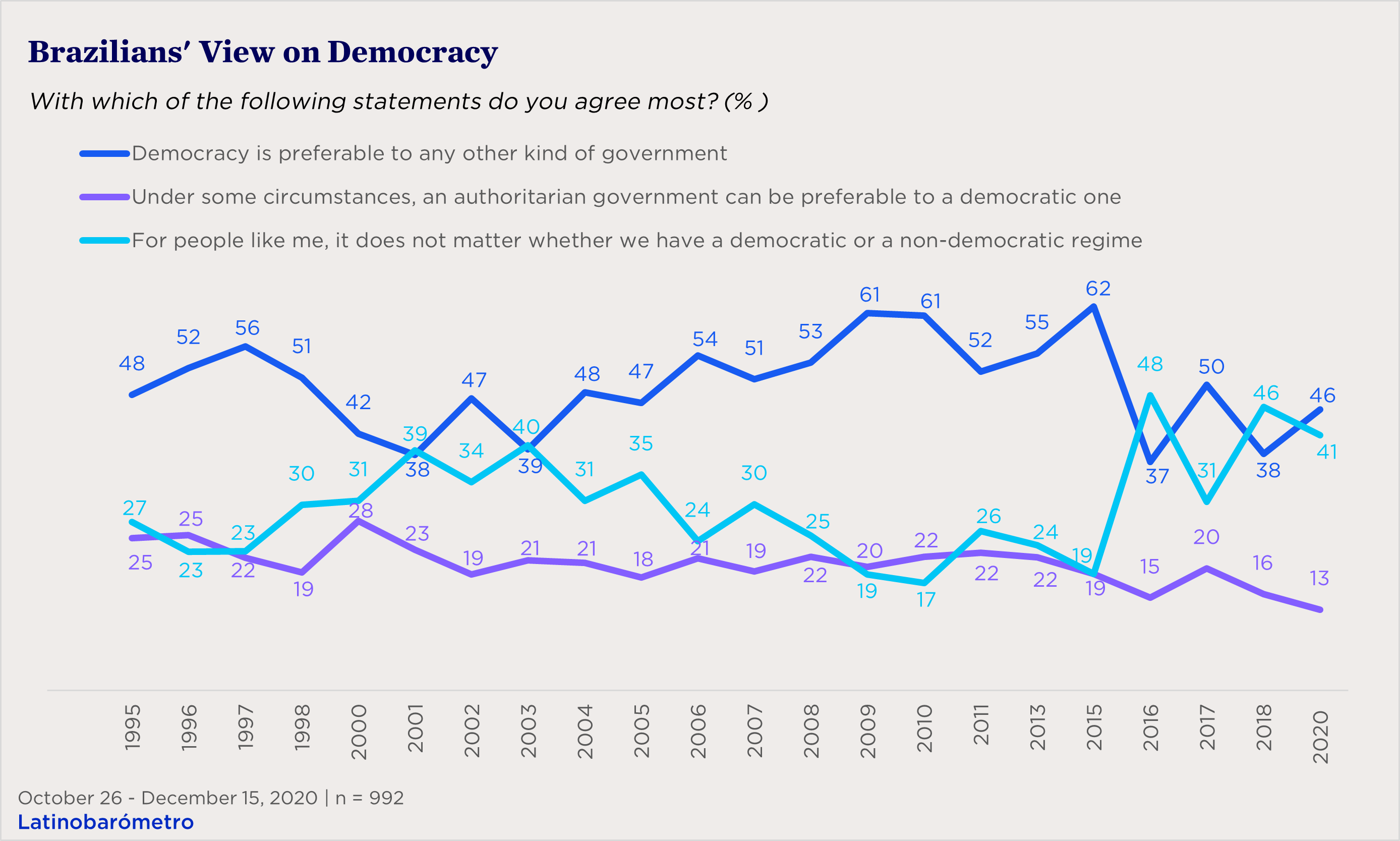 Brazilians’ lack of faith in democracy also contributes to a decreased interest in politics and political participation. According to a 2020 Latinobarómetro poll, 72 percent of Brazilian have little to no interest in politics. Reflecting that disinterest, only 79 percent of Brazilians voted in the 2022 elections despite Brazil mandating electoral participation. While that’s high compared to the United States, it’s notably lower than other countries with compulsory voting (such as Australia, which had a turnout of 90 percent in their 2022 elections).

A major reason behind this electoral and democratic mistrust is the perception of inefficiency caused by widespread corruption in Brazil. According to a 2022 Gallup poll, seven in 10 Brazilians (69%) see corruption as widespread in their government. Two of Brazil's four former presidents, Lula and Temer, have been formally charged with corruption or bribery (though Lula's conviction was recently annulled). Former President Rousseff was impeached because of the widespread Petrobras corruption scandal. Once Bolsonaro's term is over, he will lose his presidential immunity and is likely to face charges of embezzlement and potential crimes against humanity for promoting false COVID-19 treatments. Therefore, Brazil's leaders have made it difficult for the public to trust that the government has its best interests at heart. 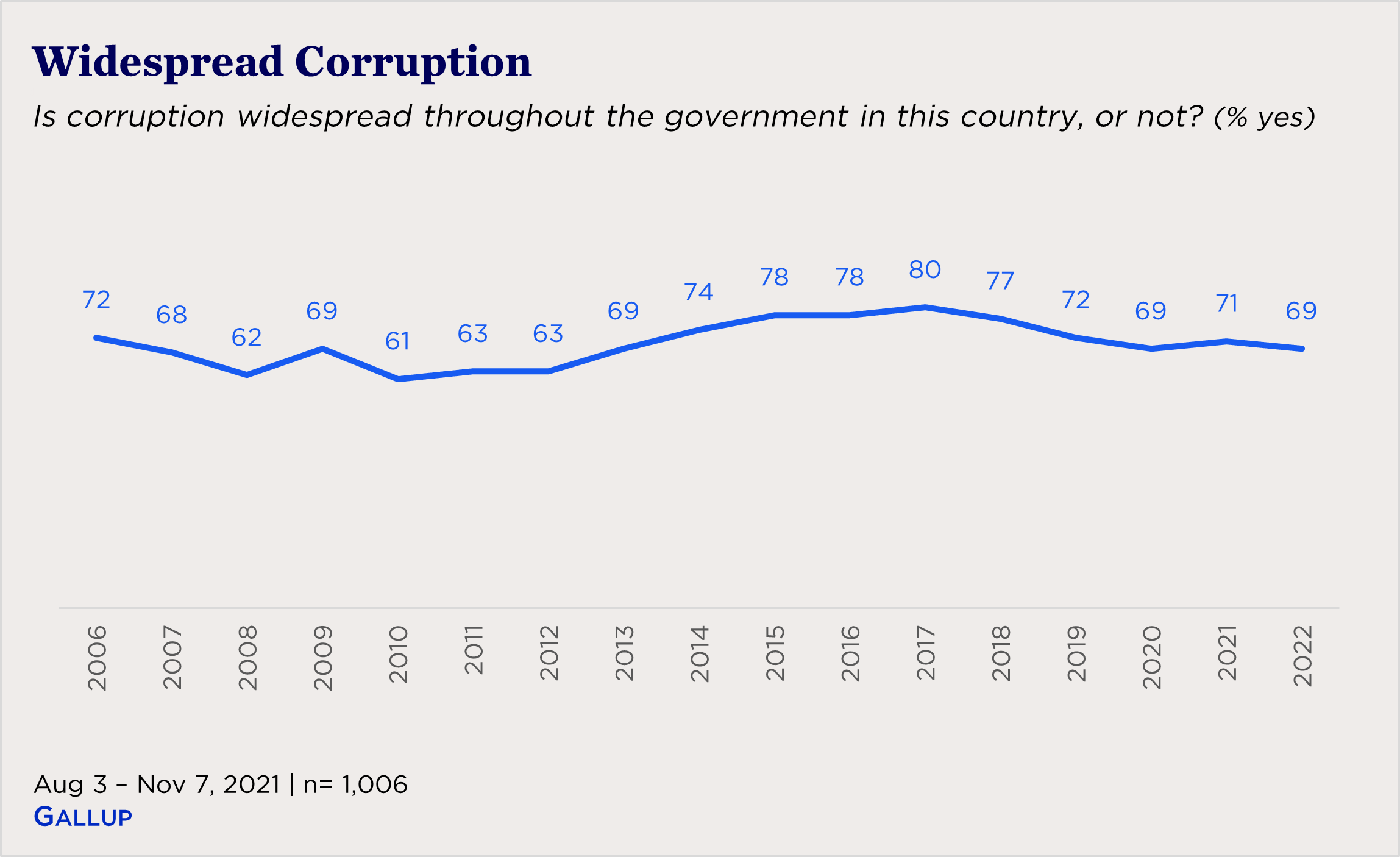 Another potential contributing factor to low confidence in democracy among non-white Brazilians is the racial biases of Brazilian democracy against Black and Indigenous Brazilians.

Brazil has a large Black population that accounts for more than half of the Brazilian population. Despite this, only 18 percent of Congress and five percent of executives in Brazil's 500 largest companies were Black in 2019. This enormous representation gap reflects the whitewashing of Brazilian history and the systemic prioritization of white communities and needs. Brazil also has high rates of violence against Black people, as 75 percent of murder victims and 75 percent of individuals killed by the police are Black.

Similarly, Brazil's Indigenous populations have faced historical injustices, including a racial wage gap, higher education access disparity, and medical care inequality. More recently, during his 2018 campaign, Bolsonaro pledged that Indigenous communities would not get "one more centimeter" of protected land.

As Latinobarómetro data from 2020 shows, these systemic biases lead to distinctly different levels of democratic trust across racial and ethnic groups. A majority (54%) of Indigenous Brazilians and a plurality (45%) of Black Brazilians do not believe that it matters "for people like them" if they live under a democratic or non-democratic regime. Only 35 percent of white Brazilians say the same. Whites are also the only ethnic group for whom a majority believe democracy is preferable to any other kind of government. 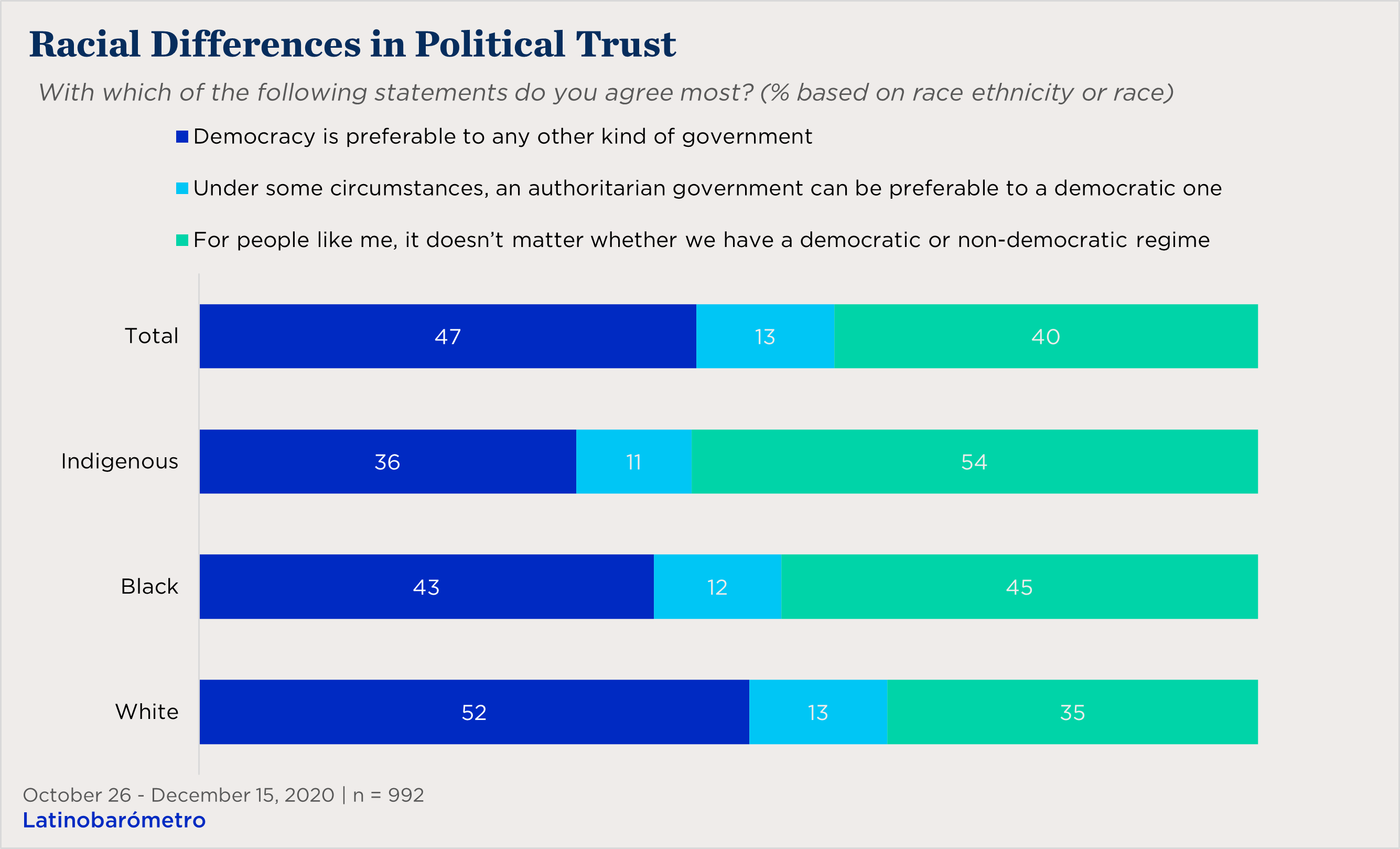 Brazil has a long history of corruption and racialized politics that makes a substantial portion of the country doubt the attainability of democratic representation. The end of Bolsonaro's term does not automatically resolve these systemic issues. Conservative Brazilians refuse to acknowledge the existence of racism in their country and follow Bolsonaro's example of blaming all societal issues on the liberals. Bolsonaro continues to undermine trust in elections as he refuses to accept the outcome of the 2022 elections and has filed a petition contesting the results. Such actions are likely to divide the country further and make Bolsonaro's supporters more suspicious of the electoral process and democracy in general.

Ivanova joined the Council in Fall 2022 as an intern with the public opinion program.

Do victories for Lula in Brazil and fellow leftist leaders across Latin America represent a new “pink tide” sweeping the continent?

"The populist president and his devotees are casting a dark cloud over the October vote," writes Robert Muggah.

Misinformation is clouding Brazil's election. The challenge is determining what information is true—and who gets to decide, writes Nonresident Fellow Robert Muggah.