Growing US Divide on How Long to Support Ukraine

At the end of November, the United States authorized its latest assistance package to Ukraine, valued at $400 million to bolster the country’s security and defense in the war against Russia, now beginning its 10th month. A just-completed November 18-20 Chicago Council survey finds that large majorities of Americans continue to support US assistance to Ukraine, both economically and with military equipment. But as the fighting drags into winter, the overall US public is now divided on whether the United States should support Ukraine as long as it takes or if it should urge Kyiv to settle for peace as soon as possible. These findings are updates to findings of a Chicago Council Survey conducted in July.

Neither Ukraine nor Russia Seen as Having the Advantage

At the recent NATO summit of foreign ministers in Bucharest, NATO chief Jens Stoltenberg said Ukraine could expect further Russian attacks because “Russia is failing on the battlefield.” Ukrainian counteroffensives put Moscow on the back foot in some areas of the country. 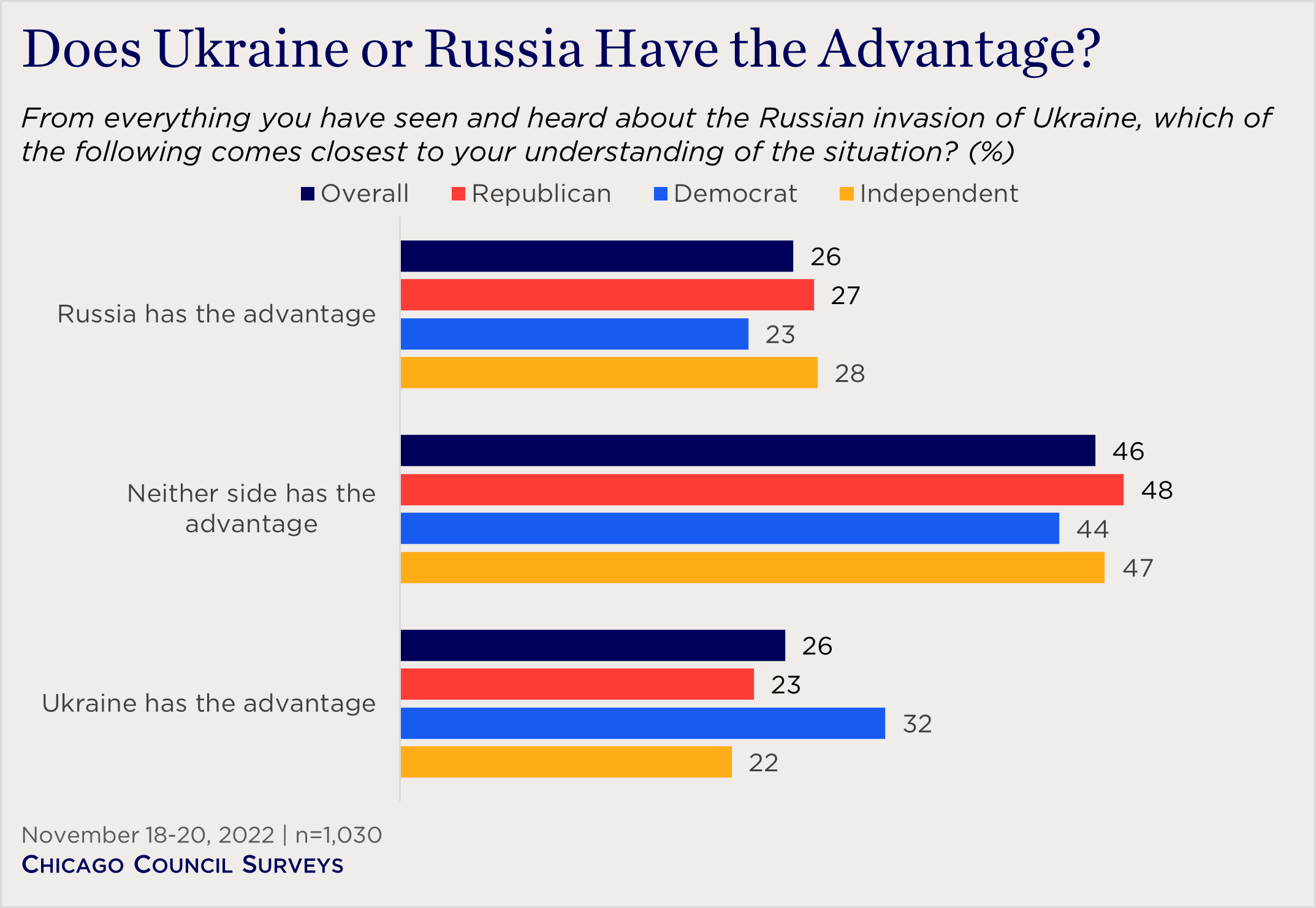 Perceptions of who is winning versus losing are important because they have a bearing on support for various policies. In an October University of Maryland poll, Americans who thought Ukraine was succeeding and Russia was losing were more willing to pay higher energy prices and tolerate increased inflation. There are similar relationships in the Council survey, as the following analysis illustrates.

Insight and understanding delivered straight to your inbox

The world is always changing. Enter your email below to stay informed and engaged in the world's most critical issues through our weekly Global Insight newsletter.

In addition to the $400 million defense package, US Secretary of State Antony Blinken announced $53 million in assistance to support Ukraine’s electrical system to help it recover from Russia’s bombardment of the country’s energy grid. Americans favor continued assistance to Ukraine, with majority support for supplying the country with arms (65%) and economic aid (66%), accepting its refugees (73%), and sanctioning Russia (75%).

But, Republican support for aid to Ukraine has declined notably over the course of the year. A smaller majority of Republicans now support the United States giving military aid (55%, down from 68% in July and 80% in March) and economic assistance (50%, down from 64% in July and 74% in March). Meanwhile, Democratic and Independent support for these policies has shown relatively little decline since March. One-third of Americans overall support sending US troops to Ukraine (32%, down from 38% in July)(see Appendix Figures A-E). 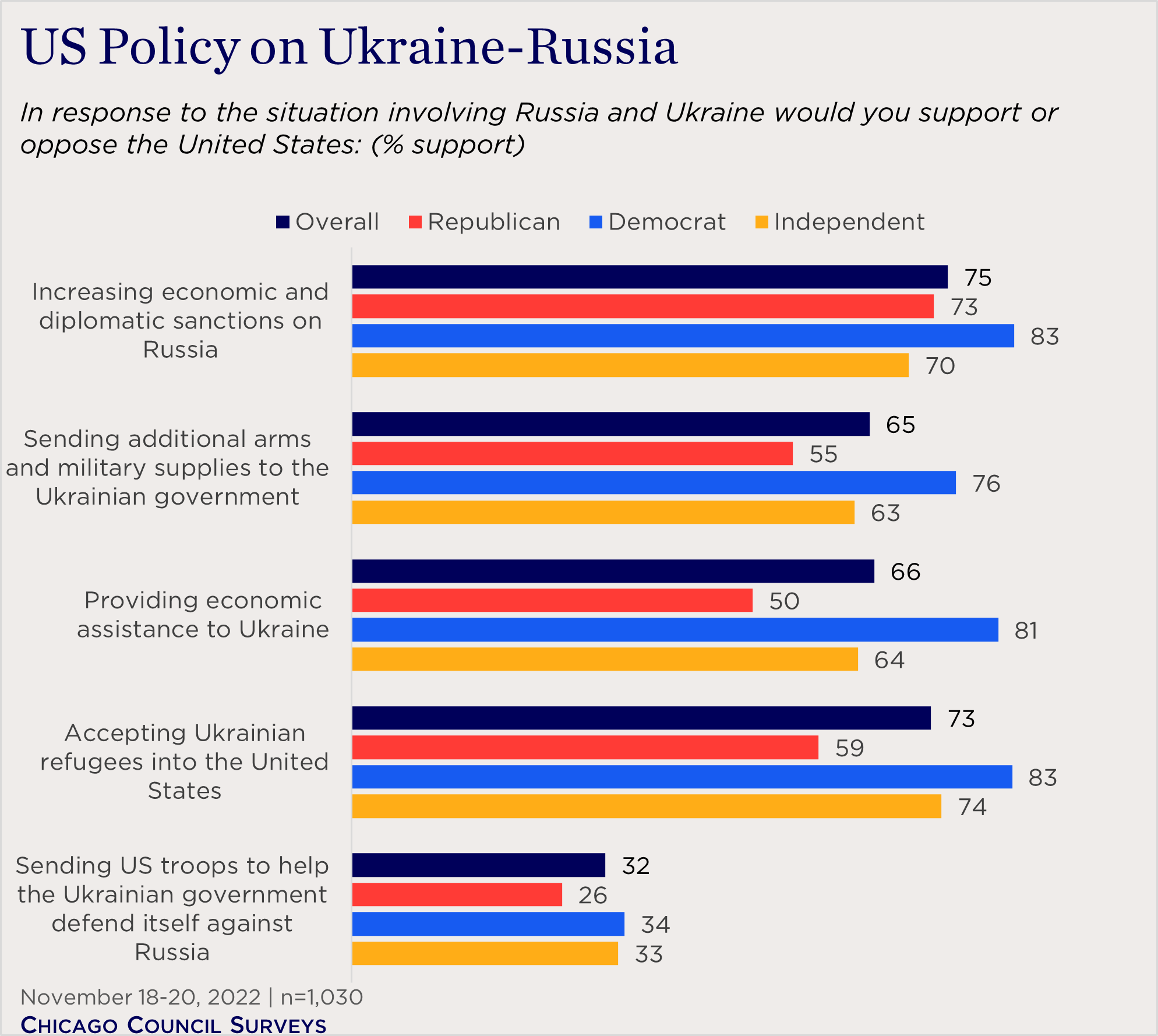 Those who sense that Ukraine has the advantage in the war support each of these policies at above-average levels, with the exception of sending US troops to help Ukraine defend itself. Those who sense that Russia has the advantage are slightly more likely (36%) to support sending troops than those who think Ukraine (30%) or neither side (32%) has the edge in the conflict.

Americans Divide Along Party Lines on Approach to Ukraine Conflict

The Chicago Council survey tested American tolerance for continued support for Ukraine in various questions. When asked whether the United States should support Ukraine at current levels indefinitely, intervene militarily to decisively end the war, or gradually withdraw US support for Ukraine, a plurality prefers to continue the current levels of support indefinitely (40%). This is also the preferred approach for a narrow majority of Democrats (53%) and a plurality of Independents (39%). Republicans tend to prefer to gradually withdraw US support (43%). 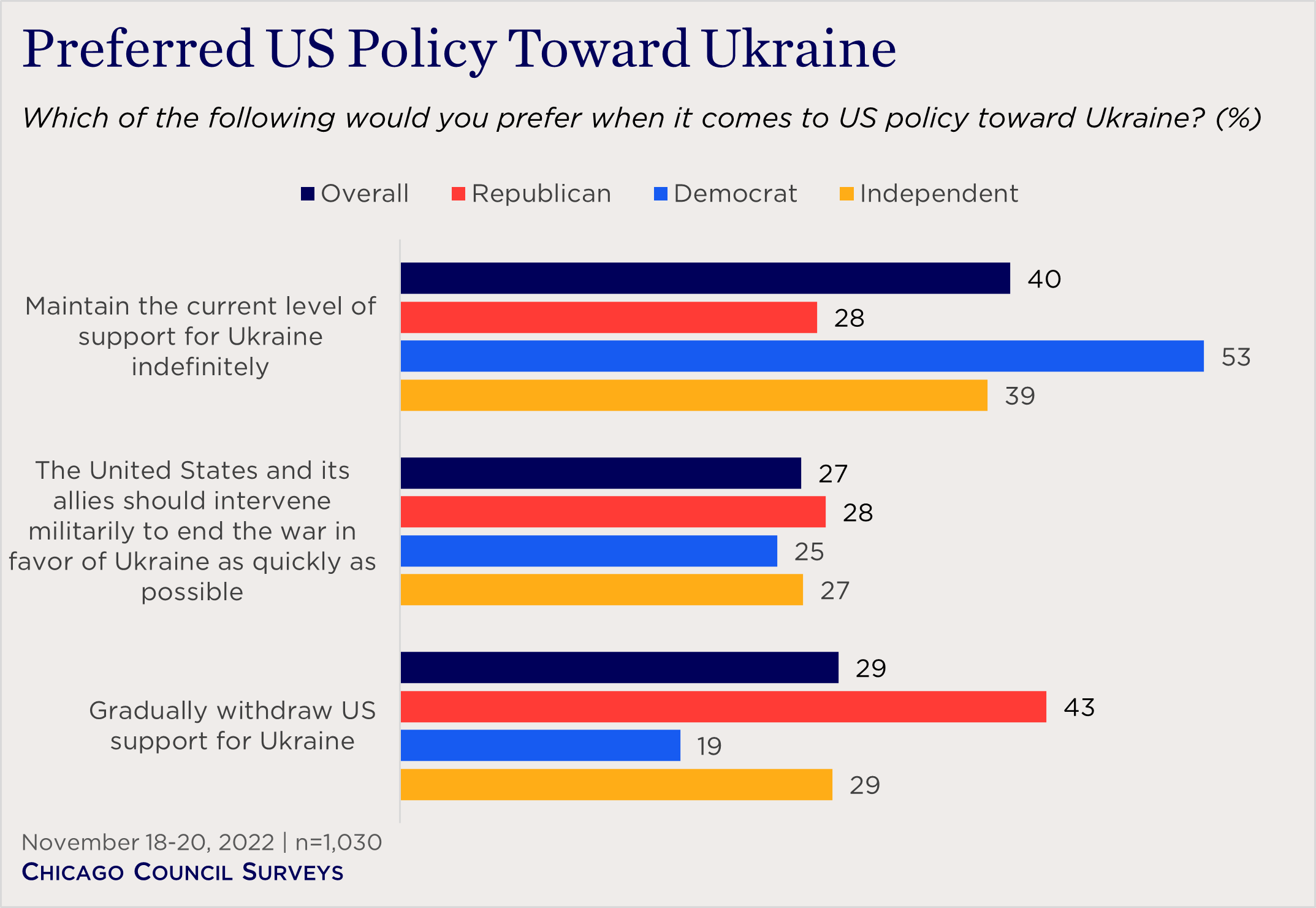 Besides partisan identification, perceptions on who is thought to be winning the war are a key factor in these responses. A majority of those who think Ukraine has the advantage say the United States should continue the current level of assistance indefinitely (56%). On the other hand, those who think Russia has the advantage are more likely than others to prefer that the United States gradually withdraw its support for Ukraine (36%) or intervene militarily to bring the war to an end (33%). 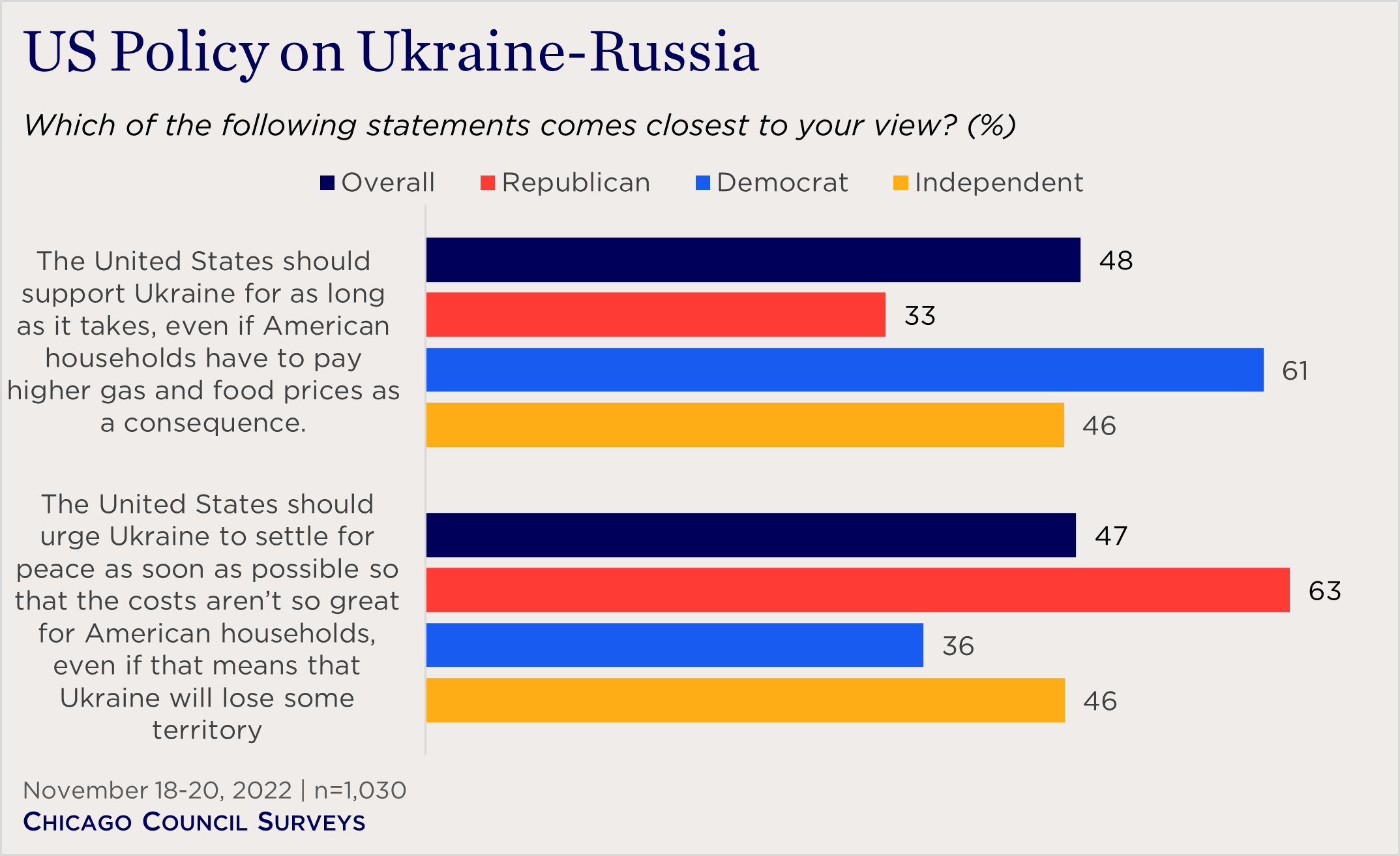 Last July, the data revealed sharp partisan divisions on this question, with Republicans more split than Democrats in support (see Appendix Figure G). In the November reading, six in 10 Democrats (61%) continue to favor supporting Ukraine even at cost to the United States, down from seven in 10 last July (69%). Republican opinion, however, has shifted more dramatically. Today, only a third of Republicans (33%) say the United States should back Ukraine for as long as it takes, down from 50 percent this summer. Instead, a majority of Republicans favor pushing Ukraine to settle for peace to reduce costs to American households (63%, up from 46% in July 2022).

Corroborating the patterns above, a large majority of those who think Ukraine has the advantage in the current conflict say the United States should support Ukraine for as long as it takes (71% vs. 48% overall). By contrast, a majority of those who think Russia has the advantage think the United States should pressure Ukraine to settle for peace as soon as possible (60% vs. 47% overall).

While Americans are divided on supporting Ukraine for as long as it takes, support for the current US policies of assisting Kyiv economically and militarily is still solid. The influence of perceptions of which side is being successful on the battlefield illustrates the important role that media spin can play in affecting public views about the situation on the ground and, in turn, on continued backing for US support to Ukraine. 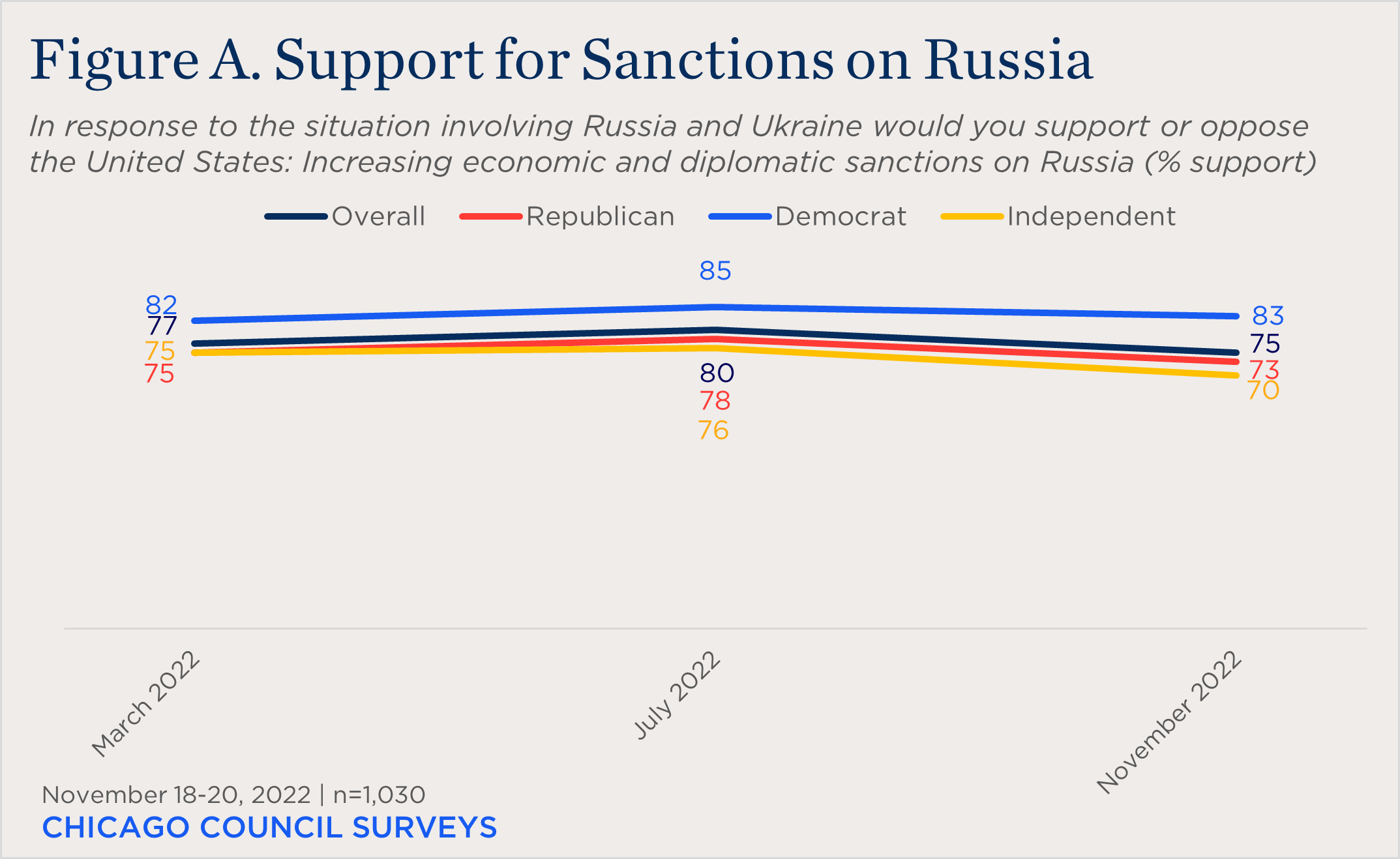 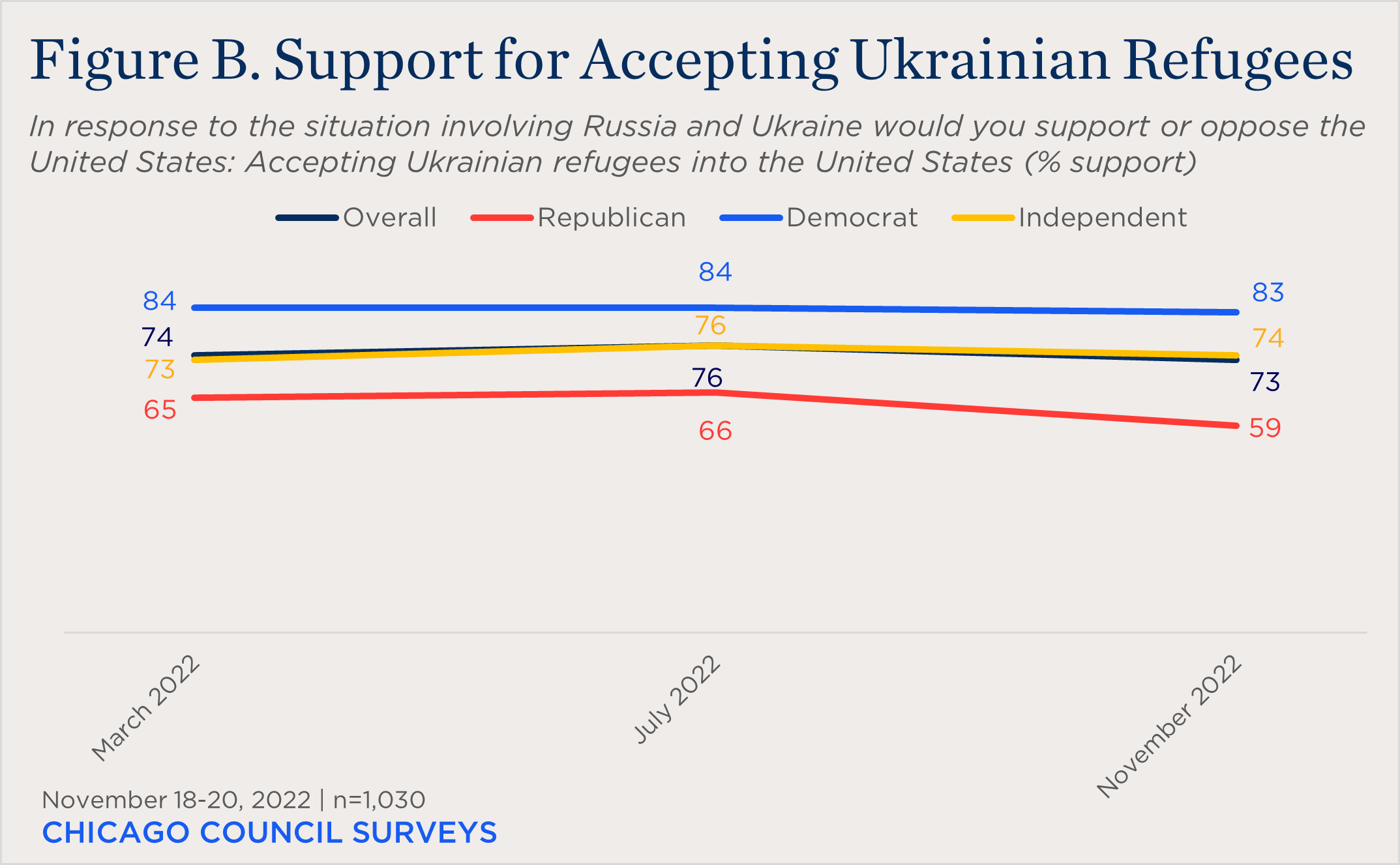 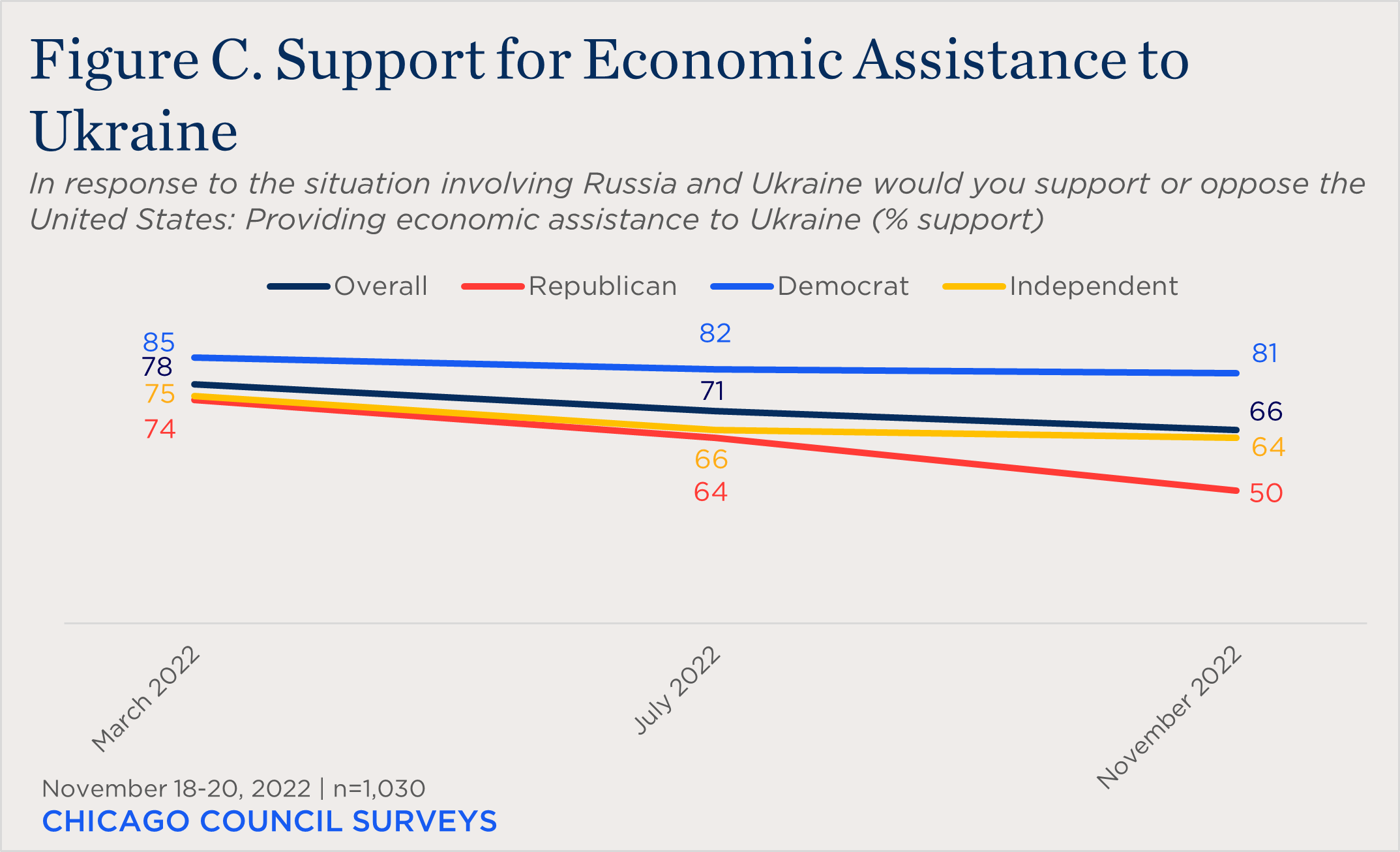 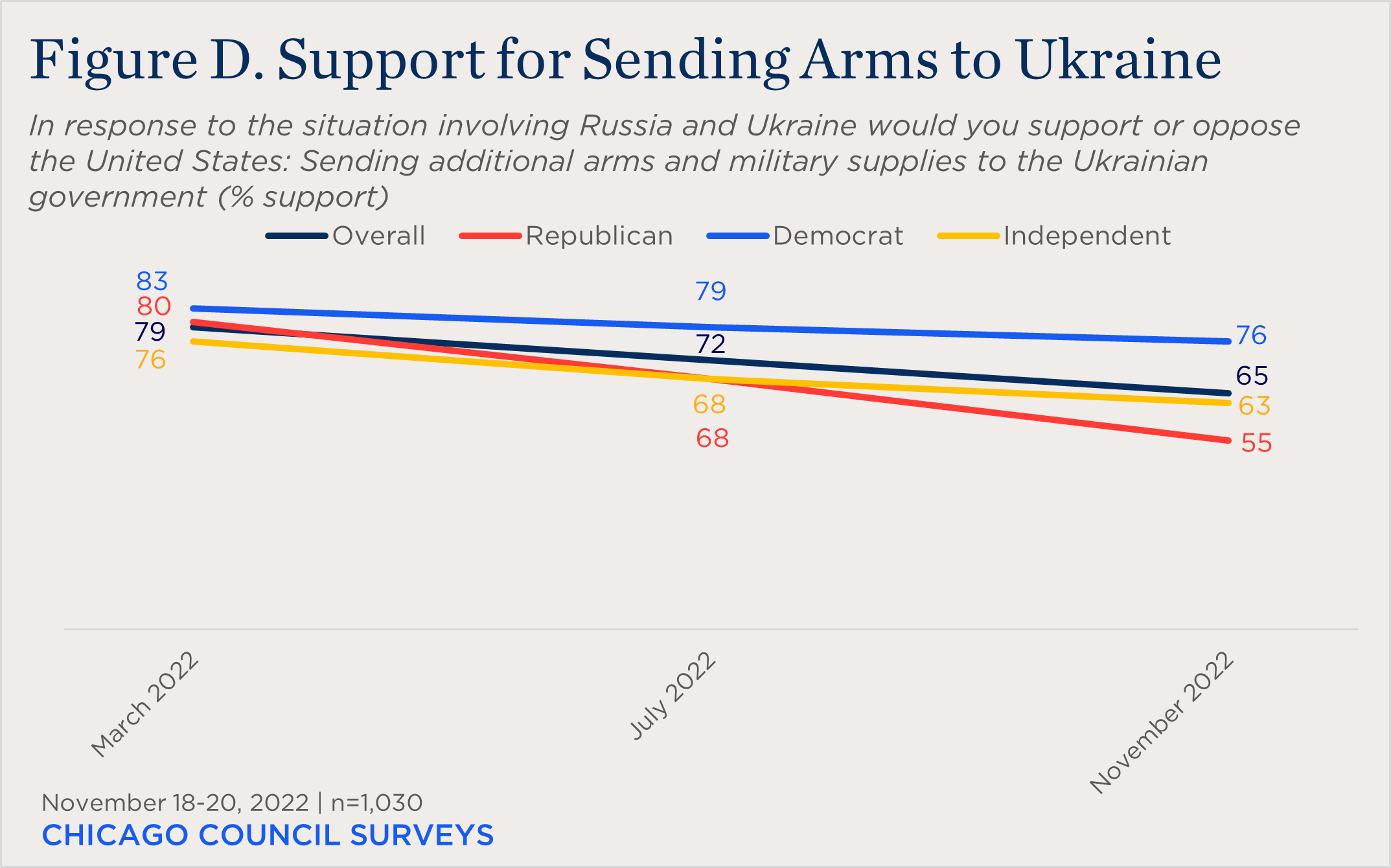 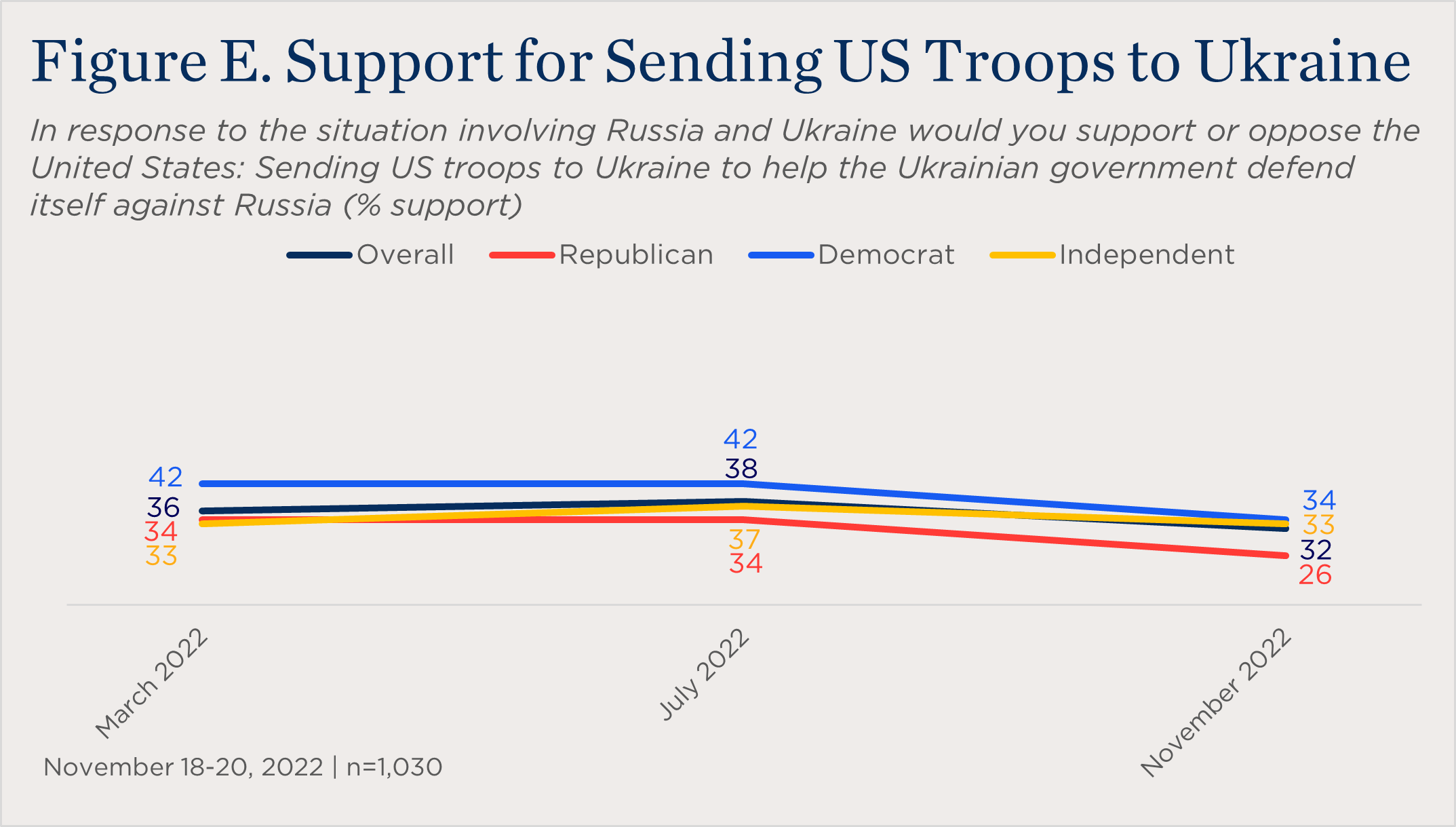 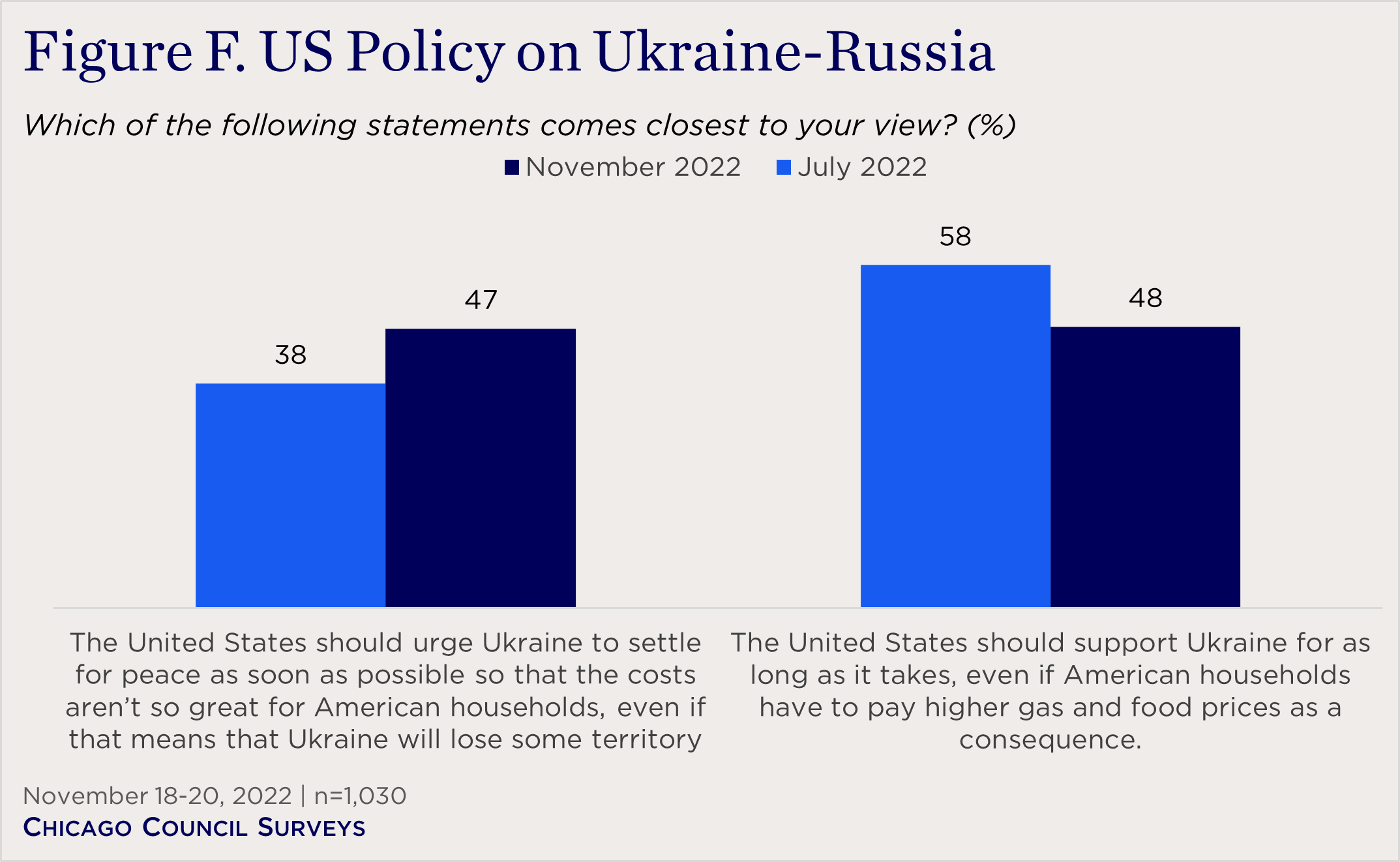 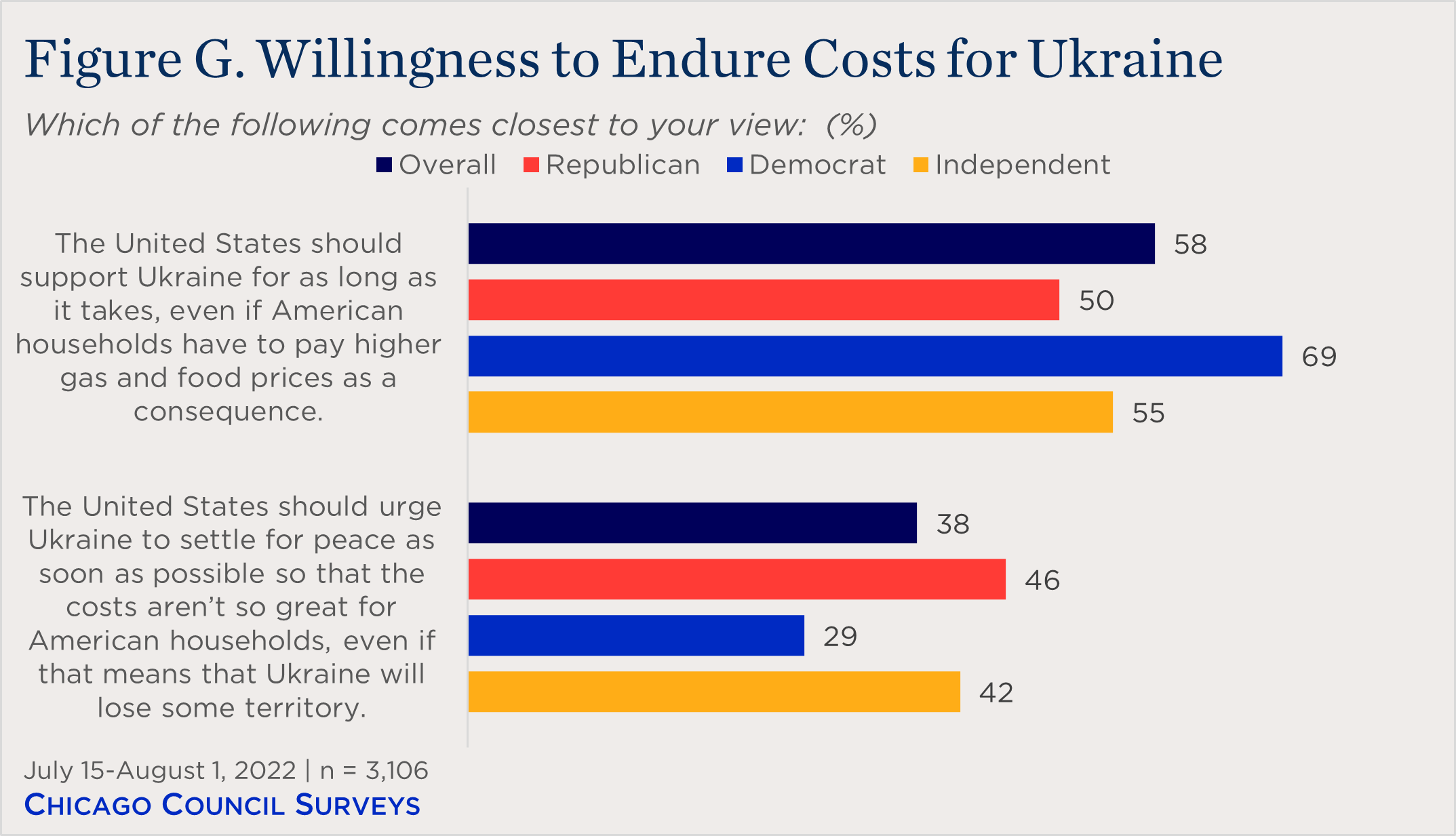 This analysis is based on data from a survey conducted November 18-20, 2022, by Ipsos using its large-scale nationwide online research panel, KnowledgePanel, among a weighted national sample of 1,030 adults 18 or older living in all 50 US states and the District of Columbia. The margin of sampling error for the full sample is +/- 3.1 percentage points. The margin of error is higher for partisan subgroups or for partial-sample items.

Partisan identification is based on how respondents answered a standard partisan self-identification question: “Generally speaking, do you think of yourself as a Republican, a Democrat, an Independent, or something else?” 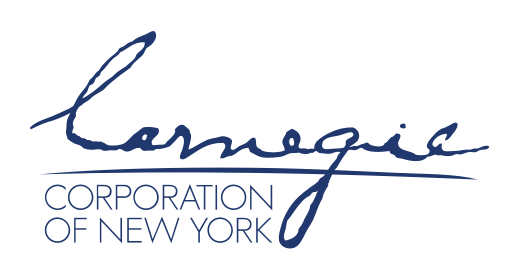 Who Has the Advantage in Ukraine?
BLOG Running Numbers by Dina Smeltz

"Support for restraint is found in the goals Americans prioritize for the US response to the war," Mark Hannah and Dina Smeltz write.