Polls show an American public deeply divided along partisan lines in their interpretation of the events, who is to blame, and what should be done as a result.

On January 6, a mob of Trump supporters stormed the US Capitol building, overwhelming police forces, and forcing the emergency evacuation of the House and Senate who had gathered to certify the presidential election results. Polls taken while the events were unfolding show an American public deeply divided along partisan lines in their interpretation of the events, who is to blame, and what should be done as a result.

An Ipsos poll of 500 Americans conducted the evening of January 6 found that most Americans are already either very (58%) or somewhat (30%) familiar with the events of the day. Few (19%) support the protesters who broke into the Capitol to disrupt the election certification, though around a third of Americans say they support President Trump’s contestation of the results (34%) and Republican efforts to do the same (35%).

A YouGov poll fielded on January 6th, conducted while the Capitol was still being cleared, found a similarly wide opposition to the storming of the Capitol, with six in ten (63%) saying they strongly oppose the actions of Trump supporters. But among the 1,397 registered voters who had heard about the events on Capitol Hill, the YouGov survey found stark differences in how Democrats and Republicans view the events and apportion blame for them. 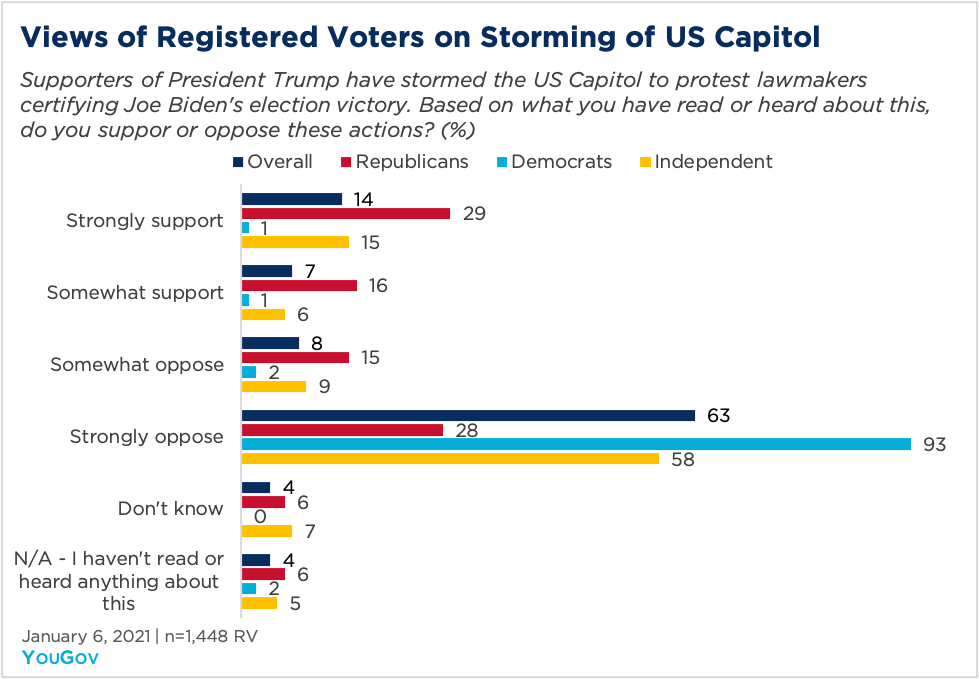 Protesters and Patriots, or a Threat to Democracy by Domestic Terrorists?

YouGov polling finds that six in ten registered voters overall (62%) see the events as a threat to democracy, including majorities of Democrats (93%) and Independents (55%), though few Republicans (27%) agree.

Indeed, Republicans are divided over the storming of the Capitol: similar proportions support (45%) and oppose (43%) the actions of those on Capitol Hill. Republicans are also far more likely to say the events of the day were peaceful (58%) rather than violent (22%), the reverse of most registered voters (59% violent, 28% peaceful).

And while nearly half of registered voters (49%) describe those who stormed the Capitol as domestic terrorists, only 17 percent of Republicans agree with that appellation. Instead, half (50%) label them as protesters; three in ten (30%) say they were patriots. Given the starkly different views of the protests and protesters, it should be little surprise that while most Democrats (92%) say those involved should be prosecuted, only half of Republicans agree (47%). 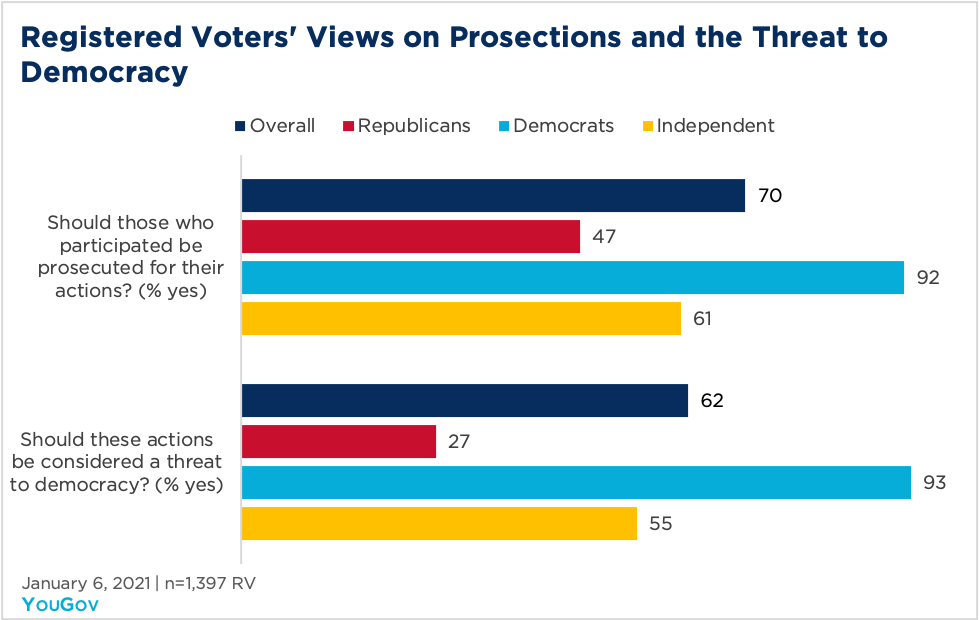 While the terminology of the events has varied widely, Ipsos polling finds that half of Americans (51%) say the storming of the Capitol is an attempted coup, and the same proportion (51%) say that President Trump should be removed from office immediately for promoting the unrest. YouGov similarly finds that half of registered voters say it would be appropriate to remove President Trump from office immediately.

Conspiratorial Beliefs among the American Public

The events of January 6 highlight the importance of understanding how conspiratorial thinking (such as the 'Q Anon' beliefs covered previously on Running Numbers) and theories of election fraud have found wide purchase among some portions of the public. Those beliefs can clearly influence behaviors, and belief in a fraudulent election shows up clearly in the January 6 YouGov poll. In that poll, three-quarters of Republicans (73%) say that enough fraud took place to change who won the election; only seven percent believe no fraud occurred. 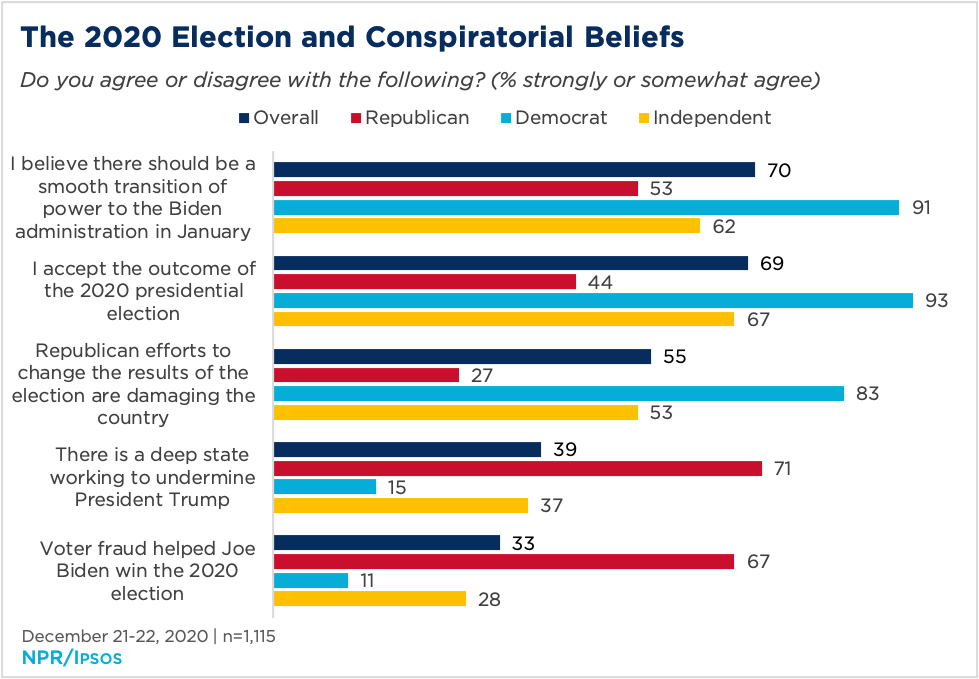 This did not come out of nowhere. As an NPR/Ipsos poll from late December found, beliefs about a 'deep state' working against President Trump and other conspiratorial political beliefs are accepted by a significant proportion of the Republican public. And while majorities of the American public overall say they accept the outcome of the 2020 election and favor a smooth transition of power to President-Elect Biden, Republicans stand out in their beliefs in a deep state conspiracy and widespread voter fraud.