New Chicago Council-Ipsos polling finds large, bipartisan majorities in support of evacuating and relocating to the United States their Afghan allies and others in danger from the Taliban.

In the weeks between the collapse of the Afghan government and the final departure of American military forces from Afghanistan on August 31, over one hundred thousand people were airlifted from Kabul. Supported by frantic efforts of US veterans groups and other civic organizations  who pressed the Biden administration to evacuate more Afghans before the US withdrawal, these refugees are now arriving in the United States. And rather than the anticipated anti-immigrant backlash against the thousands of Afghans now arriving in the country, surveys show the public is strongly supportive of relocating Afghans to the United States.

Broad Support for Taking in Afghans with US Connections; Those in Danger from the Taliban

A new Chicago Council-Ipsos survey, conducted August 23-26 as evacuations were ongoing, finds that large majorities of Americans support evacuating Afghans who worked with Americans and relocating them to the United States. Eight in ten Americans (81%) favor the evacuation and relocation of Afghans who had provided support to US and allied forces, including large majorities of Democrats (86%), Republicans (81%), and Independents (77%).

The failure of the administration to secure safe passage to the United States for many of the Afghans who worked with the United States during the long war in Afghanistan has been a major point of criticism in recent days. The public shares that critique: seven in 10 Americans (71%), including 85 percent of Republicans and 63 percent of Democrats, say the Biden administration was unprepared to remove Afghans who had provided support to U.S. and allied forces.

In addition to supporting the evacuation of Afghans who worked with the US military, majorities also favor the evacuation and relocation of Afghans who are in imminent physical danger from the Taliban (73%), as well as those who worked for US or international NGOs (72%) or who worked on US-funded projects in Afghanistan (69%). And a plurality of Americans (47%) support evacuating and relocating Afghans who are not in imminent physical danger, but who wish to seek asylum in the United States (41% oppose). 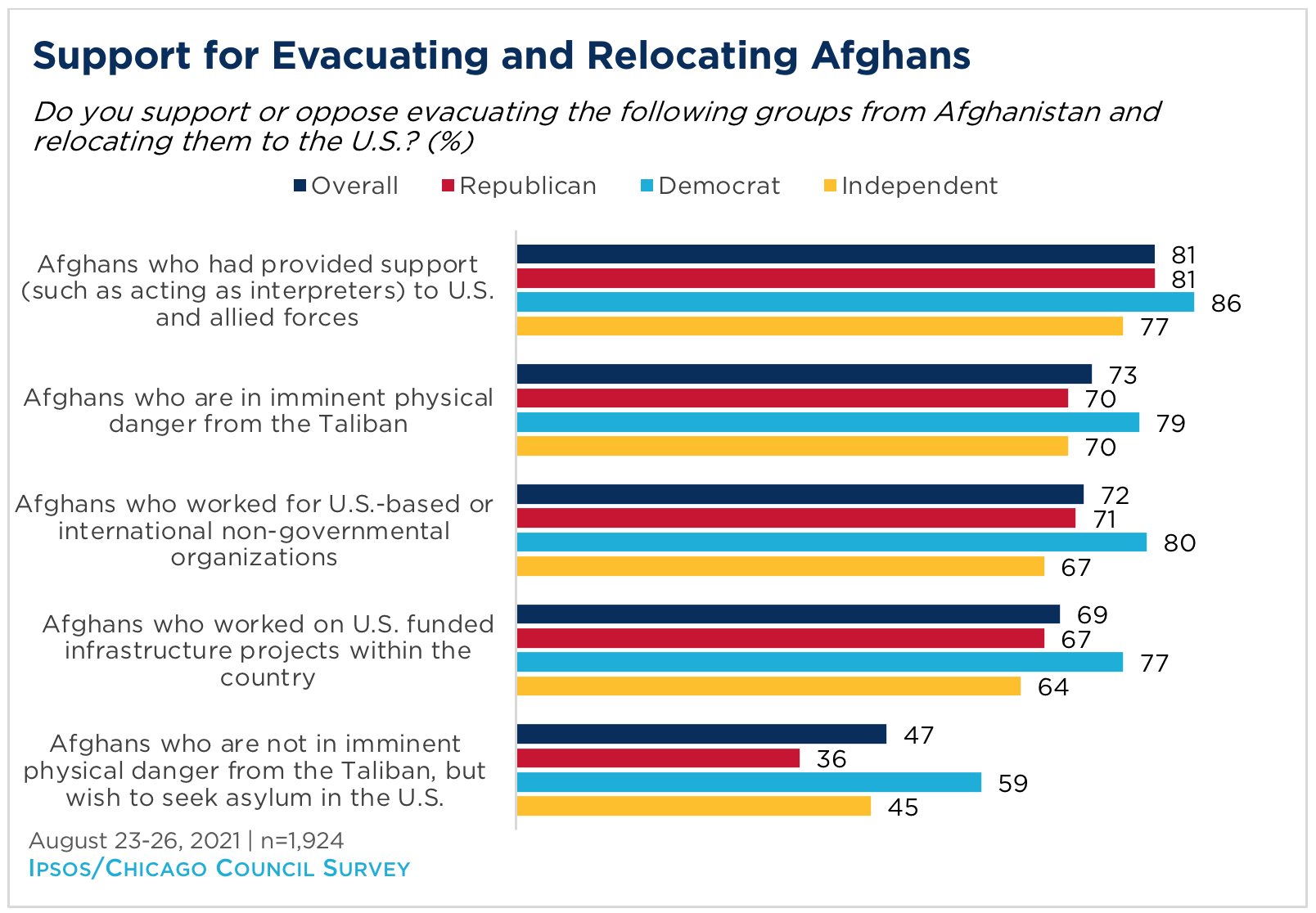 This is an unusually high level of support for admitting refugees into the United States. In Chicago Council polls from 2014-2017, majorities of Americans consistently opposed admitting Syrian refugees into the country. And the domestic politics followed suit; many governors attempted to ban Syrian refugees from being resettled in their states. By contrast, polling about Afghan refugees is strongly supportive; in a CBS/YouGov poll fielded August 20-22, a majority of Americans said the United States was not doing enough to help Afghan people trying to leave Afghanistan following the Taliban takeover.

The support for evacuating and relocating Afghans is also far less of a partisan issue than is typical for immigration. As previous Council surveys have highlighted, immigration is a highly polarized issue. Over the past two decades, Republicans and Democrats have diverged tremendously in their views of whether large numbers of immigrants and refugees coming into the country represent a critical threat to the United States. Republicans largely say it does (74%), while few Democrats agree (22%).

Perhaps because of their connections to the United States and the long war effort in Afghanistan, these groups of Afghans seem to be an exception to this polarization. Not only do large numbers of both Republicans and Democrats support evacuating and relocating Afghan allies to the United States, so do those Americans who view large numbers of immigrants and refugees coming into the country as a critical threat to the United States. The only group for which this is not true is for Afghans without any connection to the US or other international organizations and who are not in imminent physical danger for the Taliban. For these Afghans, American opinion looks more similar to views of past refugee groups.

While two-thirds of Americans overall continue to support the withdrawal, a majority of Republicans now oppose it, a new survey from the Chicago Council on Global Affairs and Ipsos reveals.

"You cannot build good foreign policy on dishonesty. But we keep trying to because no one pays for it," writes Elizabeth Shackelford.