While two-thirds of Americans overall continue to support the withdrawal, a majority of Republicans now oppose it, a new survey from the Chicago Council on Global Affairs and Ipsos reveals.

A new Chicago Council on Global Affairs-Ipsos survey suggests that most Americans are not second-guessing the US withdrawal from Afghanistan. But they are critical of what they perceive as a lack of planning and forethought on the part of the Biden administration. At the same time, it is unclear how durable an effect these criticisms will have on the Biden presidency once Afghanistan is out of the headlines.

Two in Three Support US Withdrawal, but Republicans Now Oppose

A new Chicago Council-Ipsos survey conducted August 23–26 finds that two-thirds (64%) of Americans continue to support the US withdrawal of troops from Afghanistan. While this survey was conducted mostly before the August 26 suicide bombing that killed 13 US soldiers and at least 170 Afghan civilians, other analyses of attitudes both before and after that attack found little change in overall opinion.

An earlier 2021 Chicago Council Survey, fielded July 7–26 before the Taliban took over the country, found slightly higher support for withdrawal (70%). But there is another key difference with the new August results:  the July poll found bipartisan agreement, but attitudes are now more polarized along political lines. Eight in 10 self-identified Democrats (81%) and two in three Independents (65%) support the decision, while a majority of Republicans now oppose it (57%). 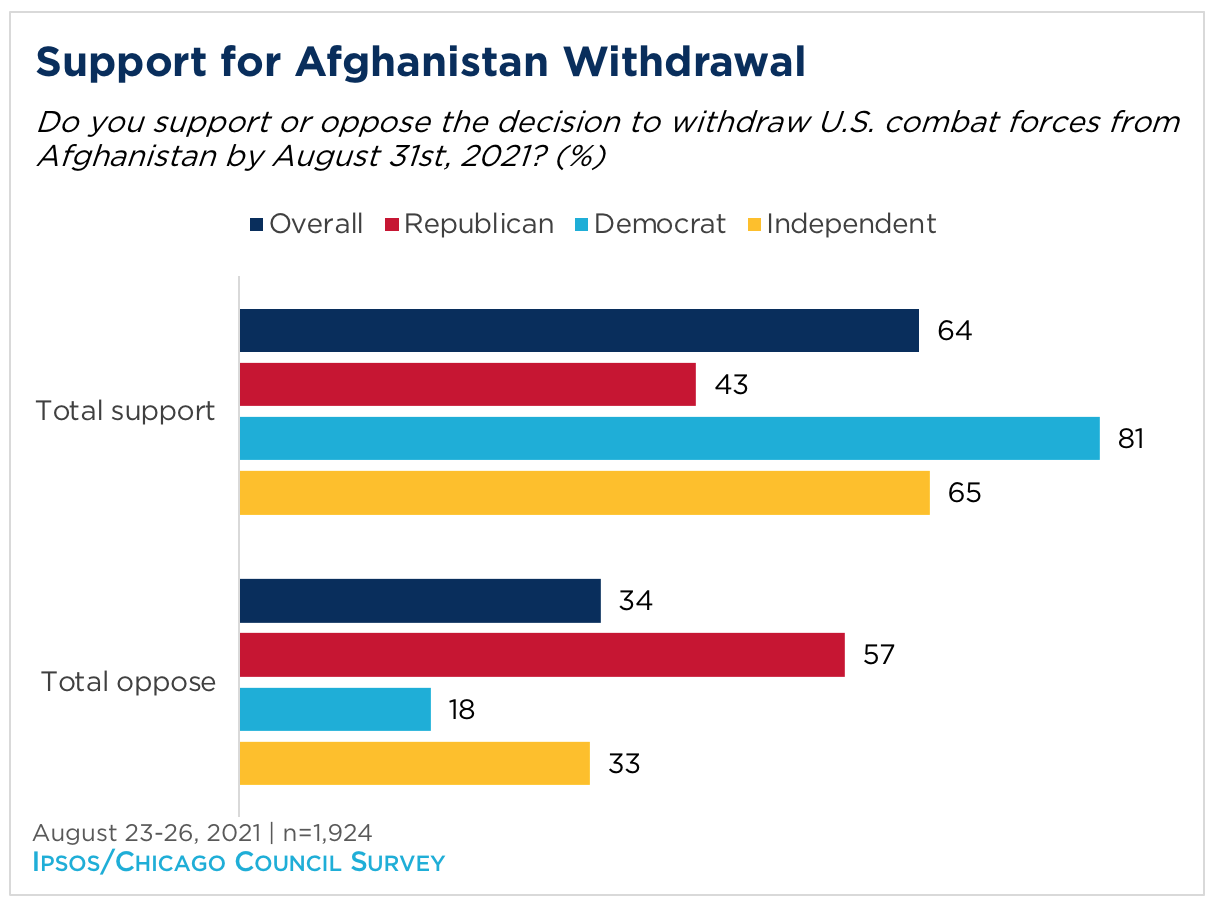 Majorities Think Administration Was Unprepared for Many Aspects of Pullout

When asked their views about the Biden administration’s handling of the withdrawal in a general sense, a majority of Americans disapprove (56%), and 43 percent approve. Most Democrats approve (70%), while nine in 10 Republicans (89%) and nearly six in 10 Independents (57%) disapprove.

These overall results echo other recent polls. An August 23–29 Pew Research Center survey found that 42 percent rated the administration’s handling of the situation in Afghanistan poorly, while 29 percent rated it as only fair. An August 18–20 CBS News survey found 70 percent of Americans said the removal of US troops should have been handled better.

Republicans, Democrats, and Independents are aligned, however, in their belief that the Biden team was unprepared for many specific aspects of the withdrawal. Majorities of about seven in 10 say the administration was unprepared for evacuating Afghans who had provided support to US and allied forces (71% overall unprepared), evacuating non-military US government personnel (67%), and evacuating other US citizens (69%). Three-quarters also think the administration was unprepared for the inability of the Afghan National Army to fight or resist the Taliban (74%) and for the rapid Taliban advances throughout the country (74%). On these latter points the Biden administration would likely agree with the public. A number of senior administration officials have expressed shock at how quickly the Taliban forces were able to overpower the Afghan military and take control of Kabul. 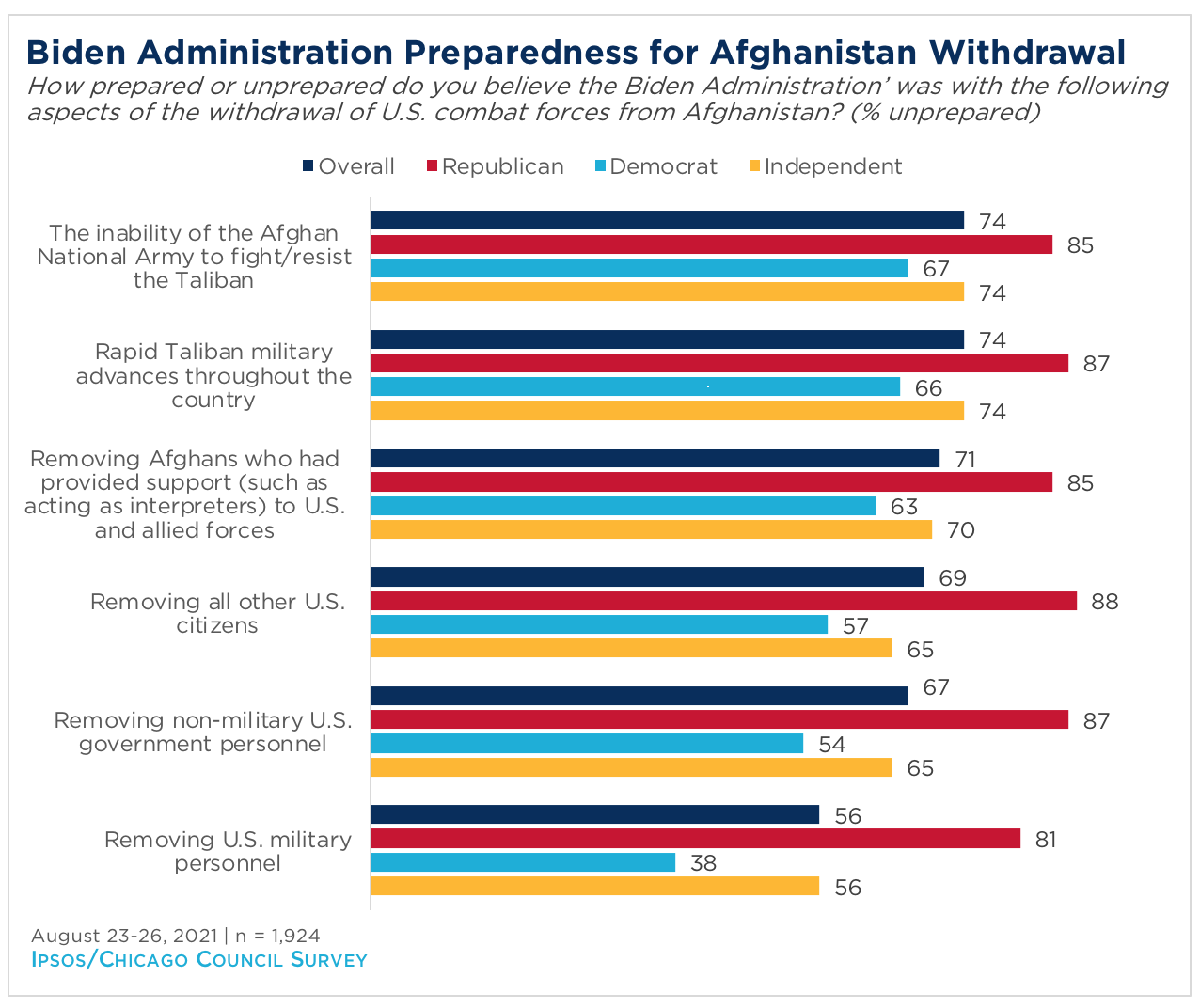 How Enduring Will Impact Be on Biden Presidency? For Now, It’s Unclear

At the end of the day, it is not yet clear how long the public will remain dissatisfied with the administration’s approach, especially once the withdrawal is no longer leading news. A CBS survey reported that more Americans blamed the Afghan government (60%) and the Afghan army (55%) than they do Biden (36%) for the Taliban taking over the country. And a Reuters-Ipsos survey conducted on August 16 found that 68 percent of Americans agreed that the war in Afghanistan would end badly no matter when the United States left. Biden expressed this sentiment himself on the very same day this survey was conducted, asserting that “there was never a good time to withdraw US forces. That’s why we’re still there.”

"You cannot build good foreign policy on dishonesty. But we keep trying to because no one pays for it," writes Elizabeth Shackelford.