As America neared its first Thanksgiving of the COVID pandemic, George Hall bowed down to touch the soil of Greene Country, Alabama, that he has farmed all his life. As a child, he picked cotton with his grandmother. As a young man, a military veteran back from Vietnam, he grew an array of vegetables and raised cattle that fed neighboring families for miles around and as far away as Detroit up north. “We used to grow everything here,” he said.

Used to. On that sunny autumn day, crouching amid four sparse rows of turnips, George wrapped his hands around a clump of stems and tugged them from the ground. “They’re ready to eat,” he said about the bright green leaves. In years past, twice a week, he would sell his produce from a stall at the farmers’ market he and some of his neighbors constructed in the county seat of Eutaw. He lamented that “it’s been a while” since the farmers’ market was in business, closed not because of the pandemic but because there were fewer and fewer farmers growing vegetables and fruits. 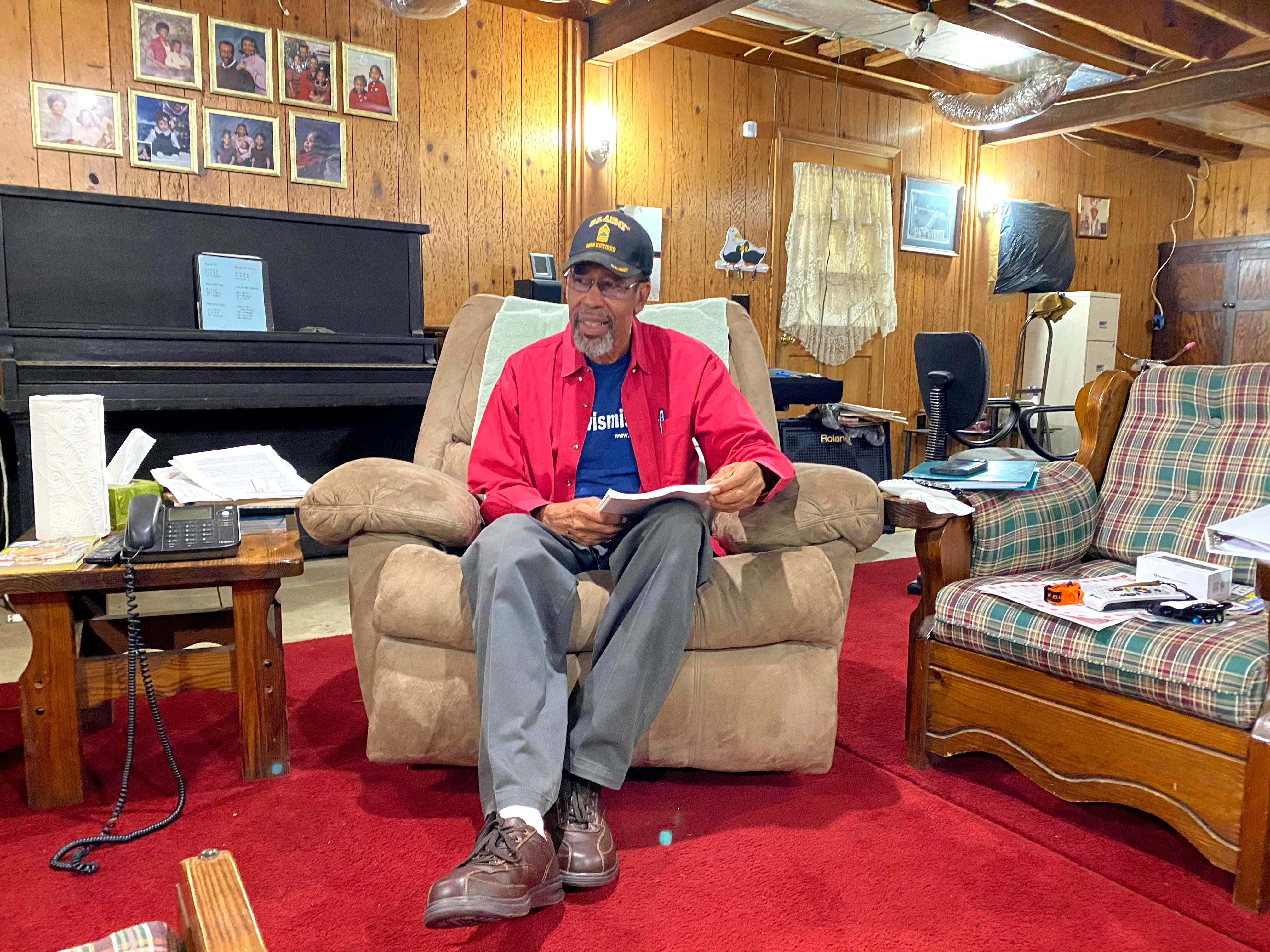 George Hall sits in his home in Greene County, Alabama.

Those lonely turnips were all George had planted. Years of systemic discrimination against Black farmers in federal loan and crop relief programs, along with the ups and downs of the farming economy, had forced George, and many others, into debt and, eventually, bankruptcy. So most of the 150-plus acres he once tilled were uncultivated. As was much of the land in Greene County. Known as the Gateway to the Black Belt – a fertile plain in central Alabama (and several other southern states) named for its dark, rich soils that sustained cotton plantations during the long years of slavery and then sharecroppers after the Emancipation, and then nourished the hopes and ambitions of commercial Black farmers who finally owned their own land – Greene County is now one of the most food insecure counties in Alabama, which is one of the most food insecure states in America.

During the pandemic, George, now 74, watched, astonished, as local residents – his neighbors who once came by for his crops – lined up for food distributions at the fire station down the road and at the old middle school in Eutaw. It broke his heart to see such desperation on land that was once so bountiful. When the need for food was greatest in Greene County and across the South, there were fewer farmers than ever growing it.

“It’s all faded away,” he says. Of his fellow Black farmers, he notes, “It’s like we’re almost extinct.”

The pandemic, which swiftly expanded from a health crisis into a nutrition crisis across America, exposed many shortcomings of the nation’s food and agriculture system and prompted President Joe Biden to summon a White House Conference on Hunger, Nutrition and Health this Wednesday. One of the most profound failings, which accounts for the persistence of food insecurity in this wealthiest of all countries and which many activists insist must be at the center of the conference discussions, is the dramatic decrease in the number of Black farmers over the past century.

In 1920, Black farmers numbered more than 900,000, representing about 14% of all U.S. farmers, according to census figures compiled by the U.S. Department of Agriculture. By 2017, the USDA reported that America had only about 49,000 Black farmers, accounting for just over 1% of all producers, working 4.7 million acres, down from about 16 million acres a century earlier. In its latest census report, the USDA noted that the farms of Black owners in 2017 “were smaller and the value of their agriculture sales was less than 1% of the U.S. total.” In Alabama, the Census showed 4,208 Black producers. In 1910, there were more than 100,000.

A Legacy of Discrimination

Over the past century, and particularly in recent decades, Black farmers have been the victims of discrimination that denied them USDA loans and disaster relief payments that were commonly and routinely available to white farmers. George Hall was one of the lead plaintiffs in a successful federal discrimination lawsuit representing hundreds of Black farmers. He presented evidence through the years, even when he was county sheriff, of loans being denied or delayed based on race. He said back then, “They didn’t want to give any more (money) to a Black man.”

USDA investigators found many cases of discrimination. A critical report by the department’s own civil-rights team concluded that “minority farmers have lost significant amounts of land and potential farm income as a result of discrimination.”

In one particular case, when George was denied disaster relief after wet weather ruined a season’s crops, the county committee claimed he didn’t properly cultivate and fertilize his crops. However, the investigators found that white farmers who also didn’t cultivate or fertilize because of the wet weather “received expeditious approval” of their disaster payments.

Despite the findings of the USDA and the settlement with the Black farmers, many of them still await full restitution. And access to financing continues to be a major obstacle for smallholder farmers across the country.

At a pre-White House Conference listening session in Selma, Alabama, southeast of Greene County, the lack of adequate funds to begin or expand farming operations, to hire labor, to upgrade equipment, to afford fuel, to build refrigerated storage facilities, to better compete with corporate farming operations in accessing markets were common themes raised by about two dozen farmers affiliated with the Deep South Food Alliance. A number of them said that the legacy of discrimination and debt is pervasive, and that inequality remains at the core of the country’s food insecurity. “A lot of the smaller farmers did not, could not farm,” said one of the farmers at the listening session, organized by the Chicago Council on Global Affairs and the Hunger Solutions Institute of Auburn University. “They had to let their land go because they didn’t have the funds to keep on going.”

Many noted that even community gardens and backyard plots have been disappearing over the years, mainly because seeds and materials were too expensive and a lack of community support to encourage youth to get involved in growing their own food. The resulting scarcity in locally grown vegetables and fruits, they noted, has added to the nutrition related health problems, such as obesity and diabetes, prevalent in many communities. They longed for the days when “people would eat from their gardens, and it wouldn’t cause so much sickness,” as one of the farmers said.

While they appreciated the recently announced intentions of the White House to increase assistance programs to small and minority farmers, they expressed a wariness about how effective they will be. A number of participants described “bottlenecks” that prevent them from accessing government resources until years after applying for assistance, further jeopardizing their operations. One farmer said he had been waiting for irrigation assistance from the USDA for over a year; another said she had been on a list for technical assistance for over three years.

One other voice from Alabama’s Black Belt has echoed through the years and looms over this week’s White House Conference.

“Be ashamed.” The soft, timid voice of a 14-year-old child reached out of televisions around the country in May 1968. In a CBS documentary, Hunger in America, a doctor visited the home of farm laborers in Hale Country, Alabama, right next to Greene County. The doctor examined a young girl for signs of malnutrition. He asked her older brother, Charles, what he had to eat at school.

The dialogue continued as viewers leaned forward to hear:

Doctor: You don’t have anything to eat when you’re at school?

“How much does it cost?”

….“Well, what do you do while the other children are eating?”

“I sit where all the children be seated.”

“How do you feel toward the other children who are eating when you don’t have anything?”

That exchange, along with other scenes in the documentary, shocked many viewers. One in particular was stirred into action: U.S. Senator George McGovern.

“I said to my family that were watching that documentary with me, ‘You know, it’s not that little boy, we should be ashamed, it’s George McGovern, a United States senator, a member of the committee on agriculture,” the senator recounted later.

In the following days, he introduced a Senate resolution to create a select committee on nutrition and human needs. That prompted President Richard Nixon to call a White House Conference on Food, Nutrition and Health in 1969 that eventually led to the creation and expansion of several federal assistance programs, including the school lunch and breakfast programs, the food stamp program (now called the Supplemental Nutrition Assistance Program, or SNAP), and the Special Supplemental Nutrition Program for Women, Infants and Children, or WIC.

Five decades later, told about the impact of his words, Charles, now 68 and growing hay and tending cattle on his small farm in Hale County, says, “It makes me feel good, it led them to do something for poor people.” He is grateful that the next generations of his family could benefit from the school meal programs that weren’t available when he was in school. And he’s happy that many others could benefit from food assistance that didn’t exist when he was growing up. He says “it made no sense” under the system back then that his parents were required to pay an initial amount to get a greater value of food stamps when they didn’t have any money in the first place. He recalls having to leave high school to help his father in the fields, and then for many years doing maintenance work at a nursing home. “God gave me a good job,” he says.

And still his galvanizing words from 54 years ago resonate on the eve of the second White House Conference on Hunger, Nutrition and Health to yet again confront America’s abiding food insecurity.

“Every time we talk about the hunger problem in this country, I feel deeply ashamed,” said Massachusetts Congressman Jim McGovern (a disciple of Sen. George McGovern’s work to end hunger, but no relation) while advocating for the conference.  “It’s sad and shameful. But there is also a feeling of hope, because there is a way forward. If we don’t do it now, it won’t happen.”

Roger Thurow spent three decades at The Wall Street Journal as foreign correspondent based in Europe and Africa prior to joining the Council in 2010. His coverage spanned the fall of the Berlin Wall, the release of Nelson Mandela, the end of apartheid, and humanitarian crises. He is the author of three books.
@RogerThurow