While Americans of all political stripes remain committed to allies and alliances, the public is divided along partisan lines on the value of international organizations.

Upon entering office, one of Joe Biden’s first orders of foreign policy business will be to start the long process of repairing America’s standing abroad. Such an effort will begin with mending fences with allies and partners around the world. The good news for the Biden administration is that Americans of all political stripes remain committed to allies and alliances. But beyond the US alliance network, the public is divided along partisan lines on the value of international organizations. While Democrats remain committed to multilateralism and cooperating with the international community, Republicans—as they have since at least the early 2000s—remain skeptical about international organizations and working with the international community more broadly.

Support for Alliances and Allies Is Bipartisan and Stable

There is little public opinion data to back up claims of a looming American isolationism. In fact, the data shows that the American public remains committed to many of the core tenets that define American engagement. The Trump administration may have veered wildly from those foreign policy practices, but it never approached any form of isolationism. The Biden administration will likely return to previous pillars. Moreover, the American public has not called for a broad US withdrawal from the world, and it is unlikely to do so. Since 1974, bipartisan majorities have consistently favored an active part in world affairs for the United States, and that was true in 2020 as well, when 68 percent stated the same. 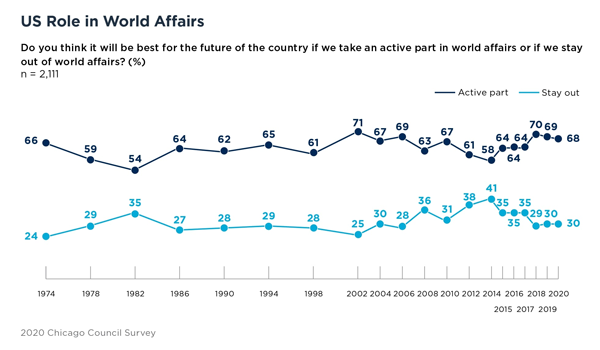 One of the key elements to the US role in the world is its network of alliances around the globe Despite the turmoil of the Trump administration and its rough treatment of US allies, the American public remains positive on allies and alliances. For one thing, Americans see alliances as an effective way to achieve American foreign policy objectives.

In January 2020, 90 percent said that maintaining existing alliances was either very effective (55%) or somewhat effective (35%) in achieving US foreign policy goals. This ranked it first among all potential policy options, placing it ahead of maintaining US military superiority (87%). 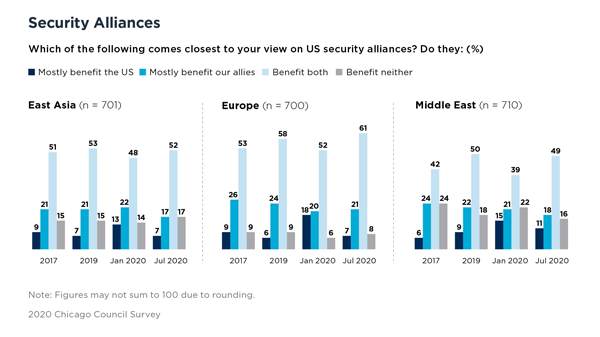 Partisan gaps on this question exist but are largely differences of intensity rather than disagreement. For example, when it comes to alliances in East Asia, 59 percent of Democrats say they are mutually beneficial and a plurality of Republicans (47%) agree. Those numbers have been stable since the question was first asked in 2017 and are similar to the gaps in attitudes on alliances in Europe and in the Middle East.

And the commitment to allies goes beyond seeing alliances as mutually beneficial: Americans are willing to defend those allies with US troops. In 2020, 58 percent of Americans favored using US troops to defend South Korea if it were invaded by North Korea. There was virtually no gap between Democrats (58%) and Republicans (57%). When it comes to a fellow NATO member, half (52%) favored using US forces if Russia invaded a NATO ally like Latvia, Lithuania, or Estonia. Here, there was a 9-percentage point gap, with Democrats (56%) more likely than Republicans (47%) to support using US troops to defend NATO. This is the first time this gap appears in the data.

Not only is support for allies and alliances largely bipartisan, but there is support on both sides of the aisle for shared leadership. Both Democrats (78%) and Republicans (54%) agree that the United States should play a shared leadership role in the world, as do 68 percent of Americans overall. But Republicans and Democrats diverge sharply on the role international organizations should play in that process.

These attitudes align with broader Democratic and Republican attitudes on approaches to US foreign policy. Among Democrats, 63 percent say the United States should participate in international organizations more than it does now to achieve its foreign policy goals. Just 18 percent of Republicans agree, as do 42 percent of Americans overall. Half of Republicans (49%) say the United States should be as involved as it is now.

There are similar partisan divides over whether international institutions should take a larger role in addressing the world’s problems. Majorities of Democrats say the United Nations (68%), the World Trade Organization (53%), and the World Health Organization (71%) should be more involved in addressing the world’s problems. Republicans are less convinced. 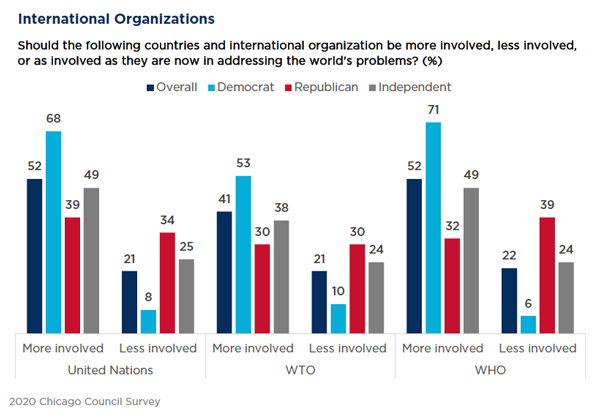 Despite the Trump administration’s novel approach to foreign policy, there is little evidence that this approach was broadly supported by Republicans. In fact, the data suggests there is strong support for reverting to a more traditional foreign policy that restores alliances even if it does not widen the net beyond that. Democrats and Republicans see value in allies and alliances and are willing to back that up with the use of force if necessary. Moreover, they are willing to include allies in foreign policy decision-making. They divide, however, on the inclusion of international organizations in that decision-making process. But this divide has been true since at least 2004 and is unlikely to shift.