Cooperation or Coercion? The Views of US Opinion Leaders on Foreign Policy Approaches

Following four years of former President Donald Trump’s “America first” foreign policy, President Joe Biden is seeking to reorient the US approach to world affairs, placing much greater emphasis on international cooperation. This reorientation has already been evident in Biden’s decisions to return the United States to the Paris climate agreement, extend the New START arms control treaty with Russia, remain in the World Health Organization, reengage with the United Nations Human Rights Council, and commit to rejoining the Iran nuclear deal if Iran returns to complying with it.

To what extent do Democratic, Republican, and Independent foreign policy professionals support Biden’s international agenda? The results of the 2020 Chicago Council on Global Affairs-University of Texas at Austin survey of more than 900 US executive branch officials, congressional staff, think tank scholars, university professors, journalists, and interest group representatives indicates there is substantial support among leaders of different political persuasions for a greater emphasis on cooperation and less reliance on coercion in foreign policy. However, this consensus also has a partisan tilt: Democrats and Independents are far more likely to agree on cooperative foreign policy approaches the United States should use, while Republicans are more comfortable with coercive measures. Taken together, these findings suggest that Biden should be able to attract strong support for his foreign policy from Democratic and Independent members of the foreign policy community but will find it much more difficult to gain Republican backing for many of his international initiatives.

Trump advanced a protectionist economic agenda, pulling out of some major international trade agreements and using tariffs extensively against both adversaries and allies. While Biden has not yet indicated whether he will preserve or lift most of Trump’s tariffs, he has sharply criticized Trump’s unilateral approach on trade.

The 2020 Chicago Council on Global Affairs-University of Texas at Austin foreign policy opinion leaders survey shows that most leaders think the United States should pursue a more cooperative approach on international economics. About two-thirds of Democratic (68%) and Republican (62%) foreign policy opinion leaders say the United States should sign free trade agreements with other countries more often. At the same time, a large majority of Democratic (88%) and a narrow majority of Republican (54%) leaders think the United States should place tariffs on other countries’ goods less often. Support for an internationalist trade policy is also high among leaders who identify as Independents, with two-thirds (64%) supporting the signing of more free trade agreements and 86 percent favoring a reduction in the use of tariffs. 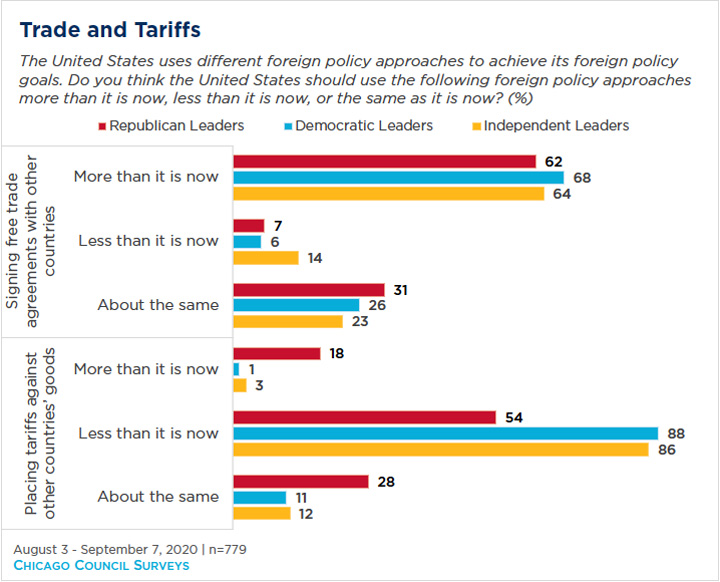 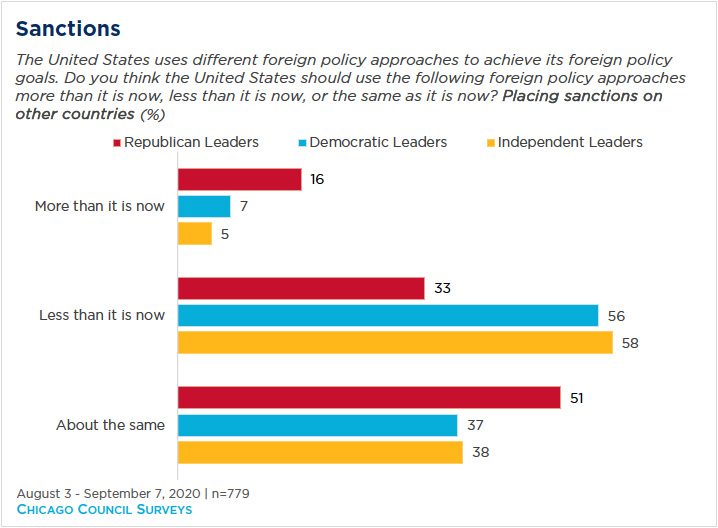 Republican leaders are split on these questions: half (51%) think the US rate of signing international agreements under the Trump administration was about right, while the rest are divided (28% favoring more often, 21% favoring less often). A plurality of Republicans (44%) believe the United States should participate more in international organizations, while a third (33%) favor keeping participation about the same. A quarter (23%) say the United States should participate in them less. The partisan gaps in attitudes concerning multilateralism mirror findings from earlier surveys showing that Republican leaders are outliers in their views regarding global institutions and treaties. 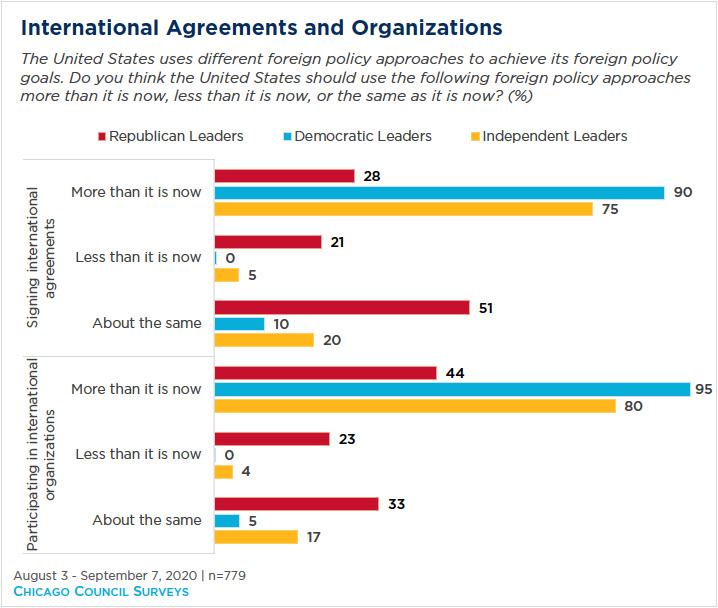 Whereas Trump sought to slash the US foreign aid budget, Biden argued for investing in the economic development of other countries in his first major foreign policy speech as president. That idea is a popular one among Democratic opinion leaders: four-fifths of Democratic leaders (80%) think the United States should increase its provision of economic aid as a foreign policy tool, and 86 percent of Democrats think the United States should provide more overseas humanitarian aid. Most Independent leaders also favor increasing humanitarian (69%) and economic (62%) aid.

Republican leaders are more divided on the use of aid. Regarding economic aid, a third of Republicans (34%) favor an increase, two in ten (20%) favor a decrease, and 46 percent favor no major change. On humanitarian aid, a majority (57%) favor maintaining current levels, a third (34%) support an increase, and eight percent support a decrease.

Republican opinion leaders are more comfortable with recent patterns in the use of force. Six in ten Republicans favor using military threats against adversaries (62%) and drone strikes against suspected terrorists (61%) with about the same frequency as they have been getting used. The remainder split between supporters of reducing the use of these instruments and supporters of using them more often. 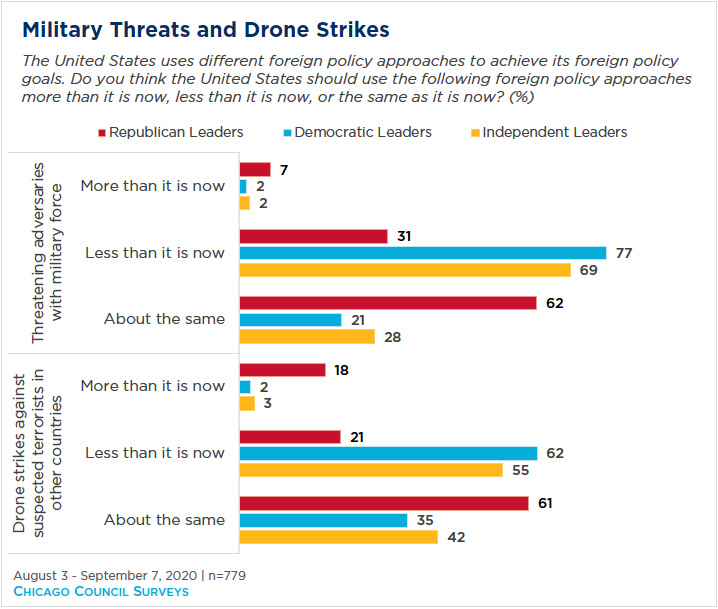 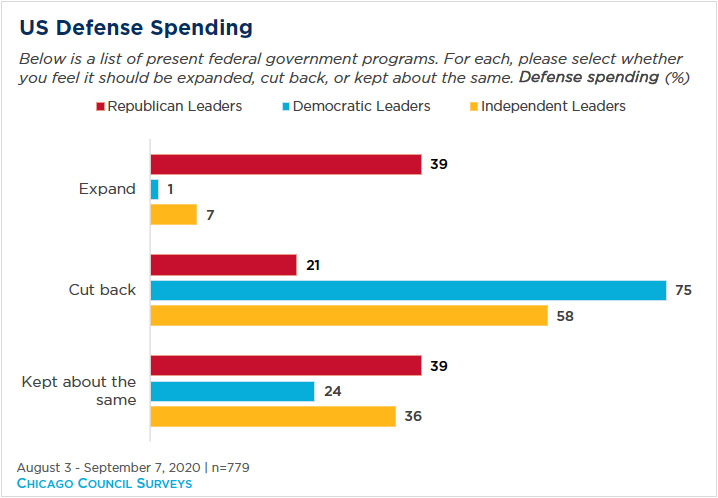 The 2020 Chicago Council Survey of the American public shows that similar differences exist between people who support the Democratic and Republican Parties. Democrats want to work within the international community and use multilateralism to project US influence. They favor increasing participation in international organizations, signing international agreements more, and more frequently providing humanitarian and economic aid. For their part, Republicans favor projecting US military and economic power abroad. Republicans among the public are much more likely than Democrats to support increasing the use of coercive measures such as drones, sanctions, and tariffs.

The results of these two surveys show that the views of the foreign policy professionals and their partisans among the public are fairly synchronized. These findings may provide some clues regarding the prospects for Biden to gain bipartisan support for core elements of his foreign policy. Biden’s foreign policy approach should attract strong support among other Democratic leaders and among Independent foreign policy analysts. Gaining Republican backing will be considerably more challenging for Biden, but the divisions within the Republican Party leadership suggest he has an opportunity to win some support from establishment Republicans too.

This analysis is based mainly on data from the 2020 Chicago Council-University of Texas Survey of Foreign Policy Opinion Leaders. The survey was conducted August 3 to September 9, 2020, among 927 foreign policy opinion leaders from different professional groups, including executive branch agencies, Congress, academia, think tanks, the media, interest groups, nongovernmental organizations, religious institutions, labor unions, and business. The data is presented without weighting adjustments for group size and so is not suitable for comparison to past years’ opinion leader data.

The analysis also draws on data from the 2020 Chicago Council Survey of the American public on foreign policy, a project of the Lester Crown Center on US Foreign Policy. The 2020 Chicago Council Survey was conducted July 2–19, 2020, by Ipsos using its large-scale nationwide online research panel, KnowledgePanel, among a weighted national sample of 2,111 adults, 18 years of age or older, living in all 50 US states and the District of Columbia. The margin of sampling error for the full sample is ±2.3 percentage points, including a design effect of 1.2056. The margin of error is higher for partisan subgroups or for partial-sample items.

Partisan identification is based on respondents’ answer to a standard partisan self-identification question: “Generally speaking, do you think of yourself as a Republican, a Democrat, an Independent, or what?”

The 2020 Chicago Council Survey is made possible by the generous support of the Crown family and the Korea Foundation.

About the Chicago Council on Global Affairs

The Chicago Council on Global Affairs is an independent, nonpartisan organization that provides insight on critical global issues, advances policy solutions, and fosters dialogue about what is happening in the world and why it matters to people in Chicago, the United States, and around the globe.

As the premier, nonpartisan global affairs organization in America’s heartland, we believe an informed, engaged public with access to fact-based and balanced views on global issues helps to ensure effective US engagement and supports a more inclusive, equitable, and secure world.

Joshua Busby is an associate professor at the LBJ School of Public Affairs at the University of Texas in Austin. He is also a nonresident fellow at the Chicago Council on Global Affairs.
@busbyj2