Survey data from several surveys in China show that the Chinese people are largely satisfied with their country's response to the pandemic.

China has experienced somewhat of a roller coaster ride since the COVID-19 pandemic started. A year ago, hospitals in Wuhan were overwhelmed by patients with COVID-19 and medical supplies were running short. Government authorities suppressed information about the outbreak, which spurred international criticism and domestic discontent with the government’s response. At the time, it was widely agreed among international observers that the Chinese government was facing a crisis of legitimacy. A year after the pandemic started, however, China has largely contained the spread of COVID-19 and its economy is undergoing a robust recovery. Did the Chinese government pass or fail the test of its capacity to govern? While not completely representative, nor based on probability sampling, two studies of public attitudes conducted in China suggest that Chinese citizens’ approval of the government’s response to COVID-19 may be quite high.

First, it’s important to acknowledge the limitations of independent survey research in China. In China, citizens can be punished for criticizing the government. In the past year, several Chinese journalists and intellectuals who were openly critical of the government’s handling of the pandemic were detained or sentenced by government authorities. It is also common for Chinese citizens to be summoned by the police—“invited for a cup of tea,” some in China call it—for their sensitive comments in private groups chats on social media, which the police have access to. Survey data from China should therefore be taken with a grain of salt, as citizens might have reservations about expressing critical views of the government, even in anonymous surveys. However, even imperfect surveys can help open a window on Chinese public views of the government’s response to the massive challenge of the COVID-19 pandemic.

In the past year, academics from the US and Canada have both attempted to measure the Chinese public’s views of the pandemic and their government’s response. One study, conducted by a research lab based in UC San Diego, conducted online surveys in February and May 2020 to a quota sample of nearly 1,000 urban residents in China. Respondents were chosen based on pre-specified proportions of gender, education, and age groups. Since the study is urban only and is limited to those with internet access (the online penetration rate is roughly 70%), the survey sample is imperfect. Still, the study shows that urban Chinese people’s trust in their government increased from February, when the pandemic was still raging in China, to May, when it was largely under control. On a scale of 1 to 10, the average level of trust in the central government increased slightly from 8.7 in February to 8.9 in May. More also said they would rather live under China’s political system than under another. On a scale from 1 to 5, where 1 is strong disagreement and 5 is strong agreement, the average score increased from 4.1 in February to 4.3 in May.

In another study, a scholar from York University in Canada collaborated with 17 Chinese academics to recruit a total of 613 students from 53 universities across China as volunteers to distribute a survey. These students were asked to reach out to their contacts and ask for their permission first before sending them a link to the survey. In other words, this is a convenience sample and has major methodological limitations. But again, given the dearth of surveys available from China currently, the information can be indicative of the public mood. The survey was distributed in late April 2020, shortly after Wuhan was reopened after more than two months of lockdown, and respondents were assured their responses would be anonymous. Questions touched on satisfaction with information dissemination and the delivery of daily necessities and protective equipment during the pandemic from five levels of government—the national, provincial, city, county, and township or village. For each question, satisfaction was measured on a scale of 1 to 5, where 1 corresponded to “not at all satisfied” and 5 corresponded to “very satisfied.” Combining each respondent’s answers for all levels of government on both questions, the researcher created an overall satisfaction index of 10 (dissatisfied with all levels of government on both questions) to 50 (satisfied with all levels of government on both questions). The results show an overall satisfaction score of 39.2 out of 50, which again suggests that Chinese citizens’ satisfaction with the government’s response to the pandemic is very high. 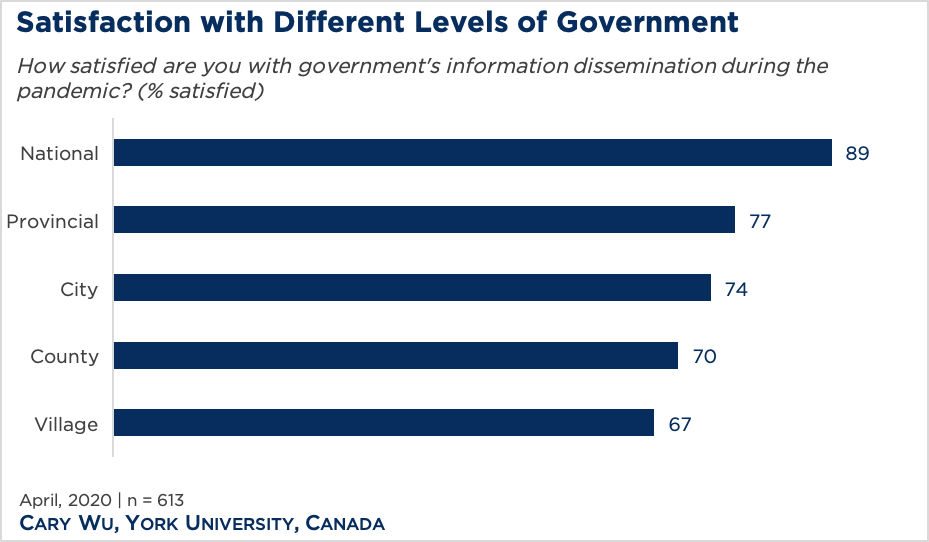 Multiple factors can explain why Chinese people’s support for their government is high amid the COVID-19 pandemic. Overall, China has done very well in containing the virus. With a population of 1.4 billion, China only has slightly more than 90,000 cases, according to the government’s own estimate. Skepticism abounds about the accuracy of the government tally, given that testing was insufficient in early 2020 and local bureaucrats might have undercounted cases to avoid punishment. What is worth noting about China’s number, however, is that the majority of cases are related to the first wave of outbreak in Wuhan. In fact, the number of cases has increased by a little more than 10,000 since March 1, 2020. Since April, life in China has largely returned to normal. Occasional outbreaks have been quickly suppressed through regional lockdown, mass testing, and contact tracing.

China is also home to one of the most heavily regulated media environments in the world. While politically inconvenient news is censored, China’s success in containing the pandemic is promoted by domestic media and state-sanctioned propaganda, which often contrast the COVID-19 situation in China with that in places like the United States and Europe, reinforcing the idea that China’s political system is uniquely fit to deal with public health crises and ensure the safety of its citizens. The combination of censorship and propaganda all but ensures that the government’s mistakes can be covered up to a great extent and the information ordinary Chinese citizens receive is favorable to the government. Furthermore, the onset of a public health crisis has led to a massive mobilization of public resources in the form of medical treatment, mass testing, and quarantine sites, which might also improve citizens’ trust in the government.

While the numbers are likely overstated, they do suggest that the Chinese public generally approve of the government’s response to the pandemic. Rather than falling into a crisis of legitimacy, the Chinese government seems to have retained its popularity, if not boosted it slightly. Approval of China’s response to COVID-19 is, in fact, shared to some degree by people outside China. A Chicago Council-Levada Analytical Center survey from January 29-February 1, 2021 shows that more than half of Americans (53%) think China has been effective in handling the pandemic, while a slight plurality (36%) think the same about the United States. Meanwhile, three out of four Russians (76%) consider China effective in handling the pandemic. As China seems to be getting the hang of limiting the spread of COVID-19, it would need to confront the new challenge of vaccinating its 1.4 billion population in order to keep winning in its battle against the pandemic.