In November 2021, Chinese state-owned rail companies were putting the finishing touches on the few remaining stations and testing the operating systems of the China-Laos Railway (CLR) for the launch of its operation on December 2, 2021. For reasons outlined below, China has touted the CLR as among a handful of “flagship projects” of its eminent Belt and Road Initiative (BRI).

Originating in Kunming, capital of Yunnan province in southwestern China, and terminating in Vientiane, capital of Laos, the CLR runs south through the China-Laos border covering a little over 1,000 kilometers, around 600 km in China and 424 km in Laos (see map). It passes through 93 tunnels and over 136 elevated bridges within China and 75 tunnels and 165 bridges inside Laos, respectively. The Railway cost around $6 billion to build, for which Laos has borrowed $3.5 billion, about 60 percent, from the Export and Import Bank of China. 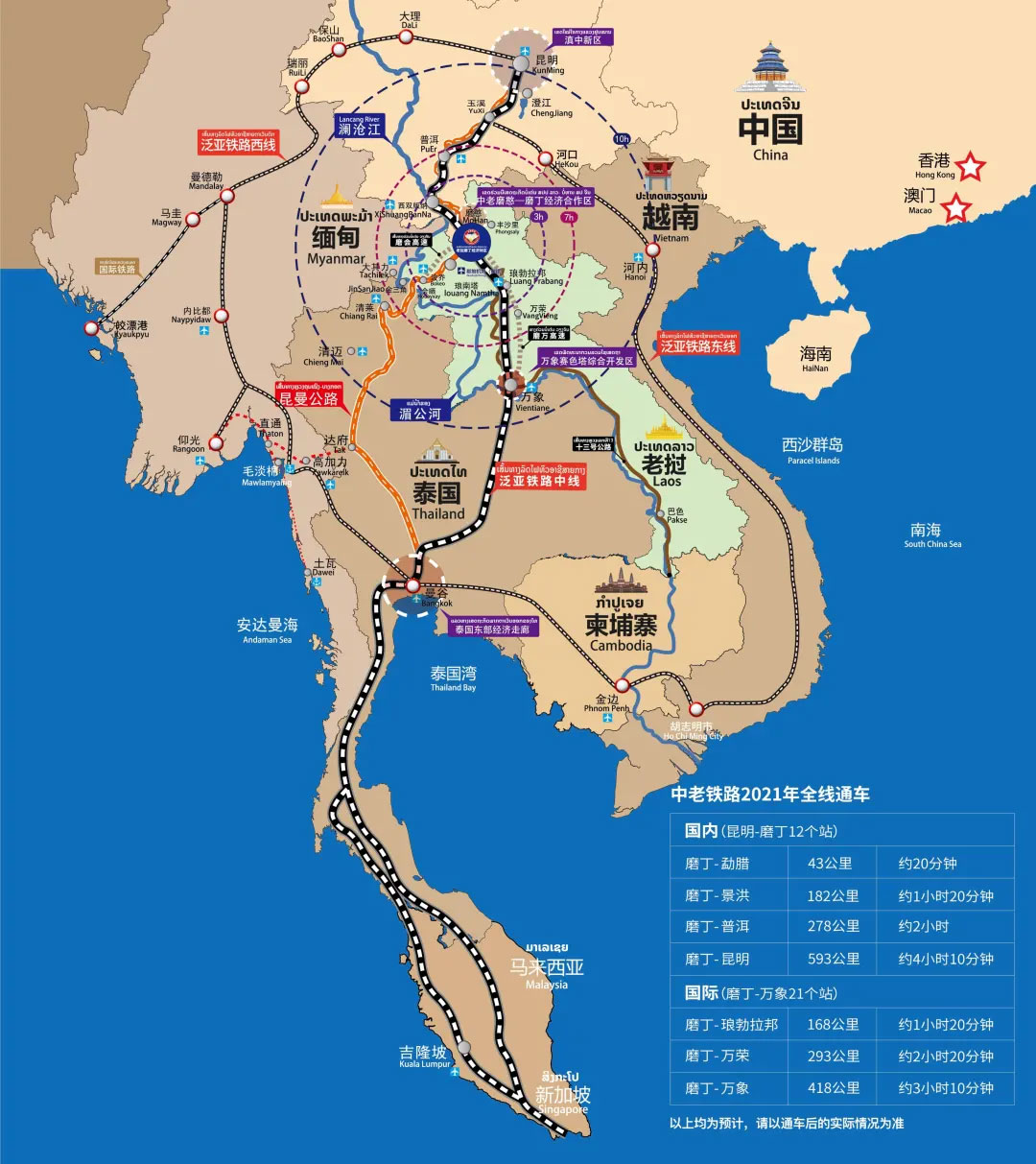 Map of the China-Laos Railway (CLR)

Ambitious as it is, the CLR is only the transport backbone of an even more audacious infrastructure-driven cross-border development corridor that includes a new economic zone in the small town of Boten, which is located right on the Lao side of the border with China. The Boten zone serves as the midway hub for the CLR. The CLR-Boten zone exemplifies China’s distinctive capacity of delivering bundled infrastructure beyond its borders. This case reveals three salient features that should guide our understanding of China’s powerful impact on global urbanization via the BRI.

First, we should see this rail-zone corridor as projecting China as a dominant player in global infrastructure provision as its primary manufacturing sector has waned. This deliberate shift from “made in China” to “built by China” helps address the huge infrastructure gap in developing and emerging economies, which account for 63% of the global need through 2035. With half of this project need coming from China itself, China has been “building out” from its own accumulated experience with the construction of large-scale infrastructure to support its expanding cities and rapid economic growth. Driven by a saturated and more regulated domestic construction market, as evidenced by the recent tighter approval of new subways in lower-tier cities, China’s inside-out infrastructure building, the BRI’s most defining dimension, has solidified it as the world’s most powerful infrastructure state.

As part of the CLR, albeit not through integrated planning from the outset, China has designed and built an economic cooperation zone over the China-Laos border in Boten and the Chinese border town of Mohan. While the Chinese side focuses on attracting regional corporate headquarters, the larger Boten zone consists of four subzones: international commerce, international duty-free shopping, international education, and medical industry, and international services. These zoned functions would be integrated into a comprehensive new city with housing for 300,000 people working and living locally (see photo 2). A major station along the CLR, the Mohan-Boten special zone serves as a logistics hub for through freight and a border crossing for passengers. Boten has already attracted a number of Chinese investment projects. Like the CLR, the Boten zone projects China’s “export” or extension of its fairly successful mode of domestic special economic zone development to Southeast Asia and Africa that traces all the way back to Shenzhen. 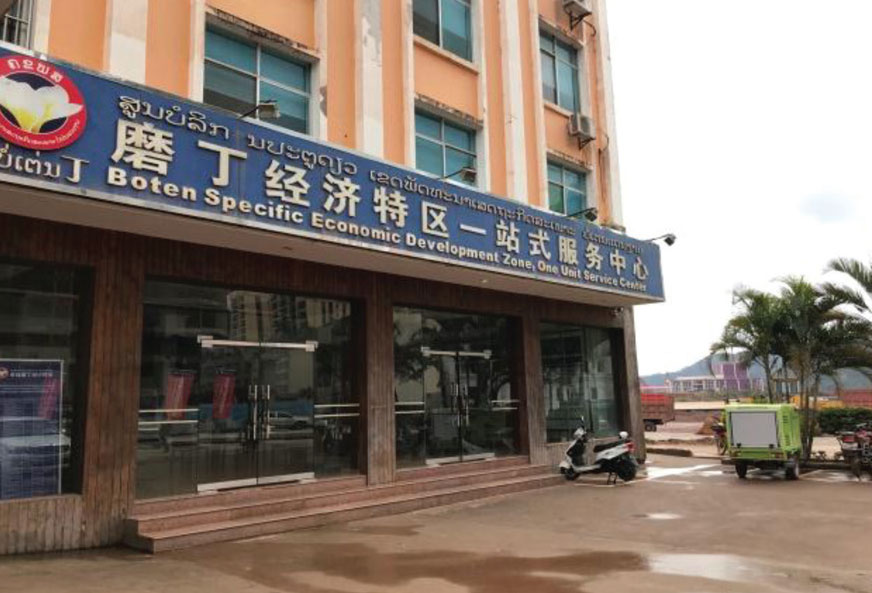 Haicheng, a private real estate development company headquartered in Kunming, is the primary financier and builder of the Boten city. This helps soften the BRI’s geopolitical image as a top-down, state-driven initiative. In return, Haicheng has benefited from the BRI’s political wind in advancing its business into neighboring Laos to offset the saturated and dwindling domestic property market. At the CLR’s southern terminus, near the Vientiane station, China and Laos have jointly built the Saysettha Comprehensive Development Zone, financed mostly by China’s national and provincial state and private companies. The zone will use the CLR to ship assembled or lightly manufactured export products. Both Boten and Saysettha add embedded urban and economic infrastructure assets to go with the CLR as a connective infrastructure project (see map). Together they make up a bundled infrastructure package that China has delivered to Laos via multiple state-state and state-private partnerships.

How will this rail-zone corridor benefit its two connected parties, especially Laos? With this new north-south transport artery extending to Bangkok, Laos will transform itself from a landlocked to a land-linked country, while landlocked Yunnan province will also gain access to the sea via Thailand pending a short 22-km rail connection between Laos and Thailand. The CLR will reduce a train ride from Vientiane to Boten from two days to three hours, while a trip from Kunming to the China-Laos border will be shortened from six to three hours. This much-reduced travel time will stimulate Laos’ tourism industry, which accounted for 12 percent of its GDP and employed over 40,000 people before the pandemic. The cultural and Buddhist attractions in Luang Prabang in northern Laos, as UNESCO heritage sites, will draw more Chinese tourists traveling on the CLR.

It appears that Laos’ agricultural sector, representing 60 percent of its workforce, stands to benefit even more. The two governments have recently agreed for China to import larger amounts of Laos’ main exports such as cows, rice, cassava, and tropical fruits, all of which can be transported efficiently north by the CLR. Regionally, the paved roads linking the CLR stations and nearby villages in northern Laos make it possible for local farmers to drive rice and cows on tractors to the stations for fast shipping to China. The CLR can extend this traditional benefit of transit-oriented development to more urban and economic spillovers along the cross-border rail-zone corridor.

Beneficial as it will be, the CLR carries both short- and long-term costs and risks. It delayed and denied wage payments to some Laotian workers. Some rural households affected by the CLR received insufficient compensation. Given its upfront costs of heavy borrowing and short-term insufficient demand, the CLR may lose money for the first decade or so as its usage gradually ramps up. While China has granted Laos annual exports of 50,000 tons of rice and 500,000 cows, Laos is currently only able to deliver 20,000 tons of rice and over 2,000 cows annually. This lack of Laos’ export capacity will limit or delay demand for the CLR and its return on investment. A similar lag in demand could turn the new zone in Boten into an underutilized hub.

With the Boten zone still under construction and the CLR on its maiden run, the full balance of benefits and costs from this massive cross-border infrastructure bundle won’t be known for some time. What is already clear, however, is that China has built a prominent number of embedded and connective infrastructure projects similar to the CLR. They include the Djibouti International Free Trade Zone, industrial parks in Ethiopia, the Addis Ababa-Djibouti Railway, and a similar combination of port and zone development in Mombasa and the Mombasa-Nairobi Standard Gauge Railway in Kenya.

These projects mark China’s exceptional role in designing, building, and delivering bundled infrastructure that distinguishes itself from the West. They also pose challenges and lessons for the West as it is ramping up initiatives like the G7’s Built Back Better World (B3W) and the US-led Blue Dot Network that aim to help close the infrastructure gap in developing countries by providing inclusive, transparent, and economically viable infrastructure projects and certifying them against robust criteria and standards. To the extent that these will provide alternatives to China’s approach, could it lead to cooperative opportunities for both based on their complementary strengths? A yes to this question would be good for all parties, especially the developing world.

This essay was produced as part of the workshop “China's Rise and Reach: The Belt and Road City” held by the Chicago Council on Global Affairs in September 2021. The workshop was the final meeting of the Great Powers and Urbanization Project, a collaboration of global leaders in international and urban affairs: the Chicago Council on Global Affairs, the University of Pennsylvania’s Perry World House, the University of Melbourne’s Connected Cities Lab, the Argentine Council for International Relations (Consejo Argentino para las Relaciones Internacionales), the Barcelona Centre for International Affairs (CIDOB), and the African Centre for Cities.

Xiangming Chen is a Raether Distinguished Professor of Global Urban Studies and Sociology at Trinity College, a guest professor at Fudan University, Shanghai, and an adjunct professor at the Graduate School of the Shanghai Academy of Social Sciences.

China's Rise and Reach: The Belt and Road City
PAST EVENT VIDEO China's Changing Landscape
This workshop, part of the Great Powers and Urbanization Project, examines how Belt and Road cities are likely to shape patterns of globalization in the 21st century.
Issues Global Cities Global Economy, Trade and Business
Regions China Southeast Asia
Back to Blog Listing