On the 20th anniversary of 9/11, new polling finds that Americans still see international terrorism as a critical threat.

Few events have lodged themselves in the collective consciousness of the American public as deeply as the terrorist attacks of September 11, 2001. The 20th anniversary of the deadliest terrorist attack ever carried out on US soil, as well as the end of the nearly 20-year war in Afghanistan that began as a response to these attacks, provide an apt opportunity to examine how the events of September 11 continue to affect the American public today.

A recent Chicago Council-Ipsos Survey (August 23–26) finds that nine in 10 Americans who were aged four or older in 2001 remember exactly where they were or what they were doing the moment they heard about the terrorist attacks on the World Trade Center. This legacy is unsurprising given the devastating emotional toll of the 9/11 attacks on the American public. In a Pew survey conducted just days after the attacks (September 13–17, 2001), a large majority of adults (71%) said they felt depressed, half were experiencing difficulty concentrating (49%), and a third of American adults were having trouble sleeping.

As a part of this year's Chicago Council-Ipsos Survey, respondents were asked to evaluate how much impact a number of major events of the last two decades had on them personally. Americans ranked the terrorist attacks of 9/11 second only behind the COVID-19 pandemic. Given the recency effect of the pandemic, the enduring primacy given to 9/11 is a powerful indicator of the lasting impact it has had on the collective American memory. 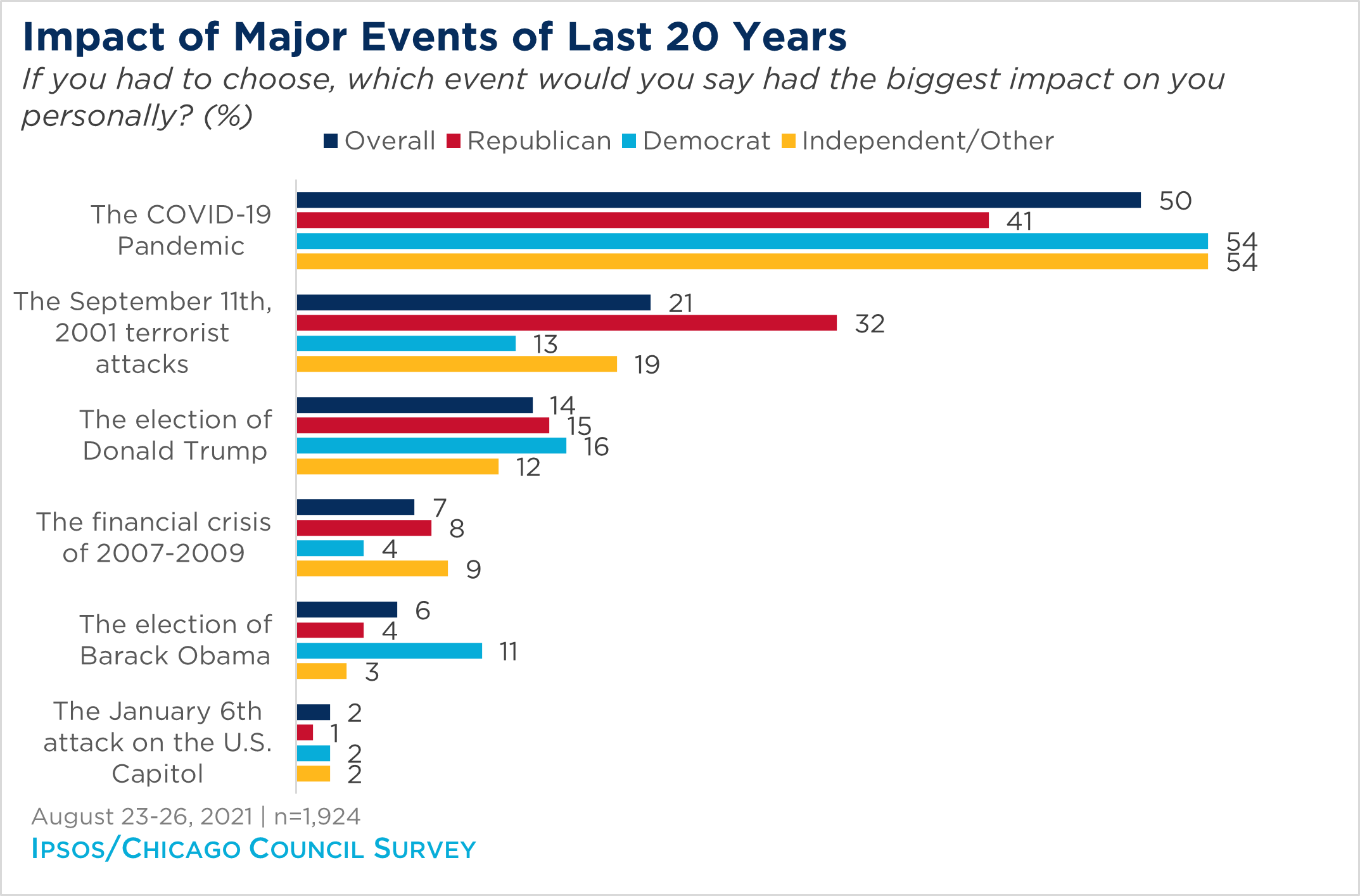 When asked about a number of efforts undertaken by the US government to prevent terrorist attacks in the last 20 years, majorities of Americans feel that each of these efforts has been effective. Some efforts were seen as effective by more than seven in 10 Americans, such as the counterterrorism work of Federal Law Enforcement (74%), the Intelligence Community (74%), and the Transportation Security Administration (72%). However, the US military actions in Iraq and Afghanistan are considered more controversial, with 54 and 53 percent of those polled believing them effective, respectively. 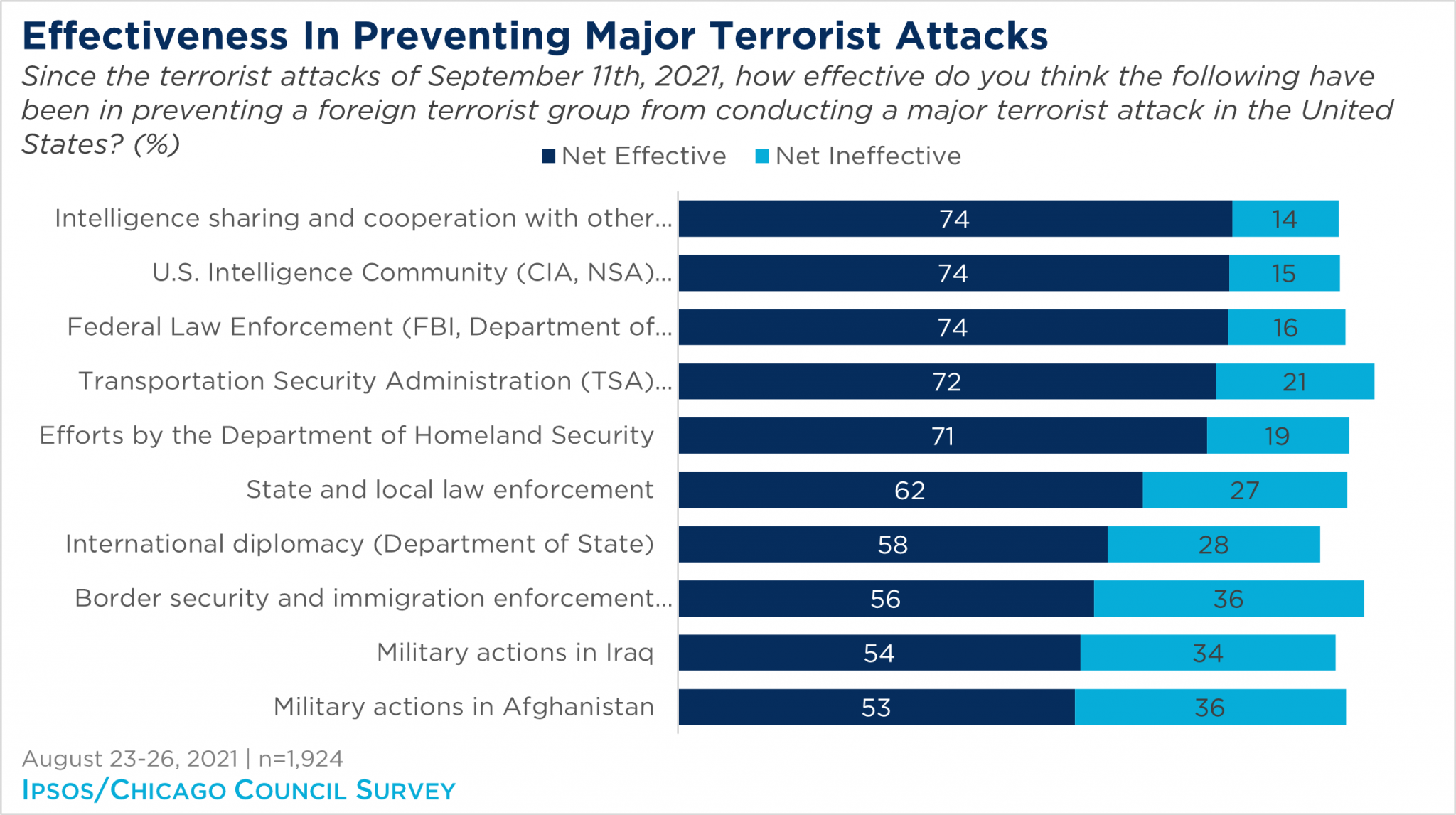 Overall, a majority of Americans support the US withdrawal from Afghanistan (64%) and view the policies put in place in response to 9/11 as effective. American confidence in counterterrorism policies was reflected in the 2020 Chicago Council survey, in which 54 percent of Americans classified international terrorism as a critical threat to the vital interests of the United States—the lowest figure since the question was first asked in 1998. This year, that number has rebounded to 61 percent, indicating that in the minds of the American people international terrorism is certainly not a threat of the past. 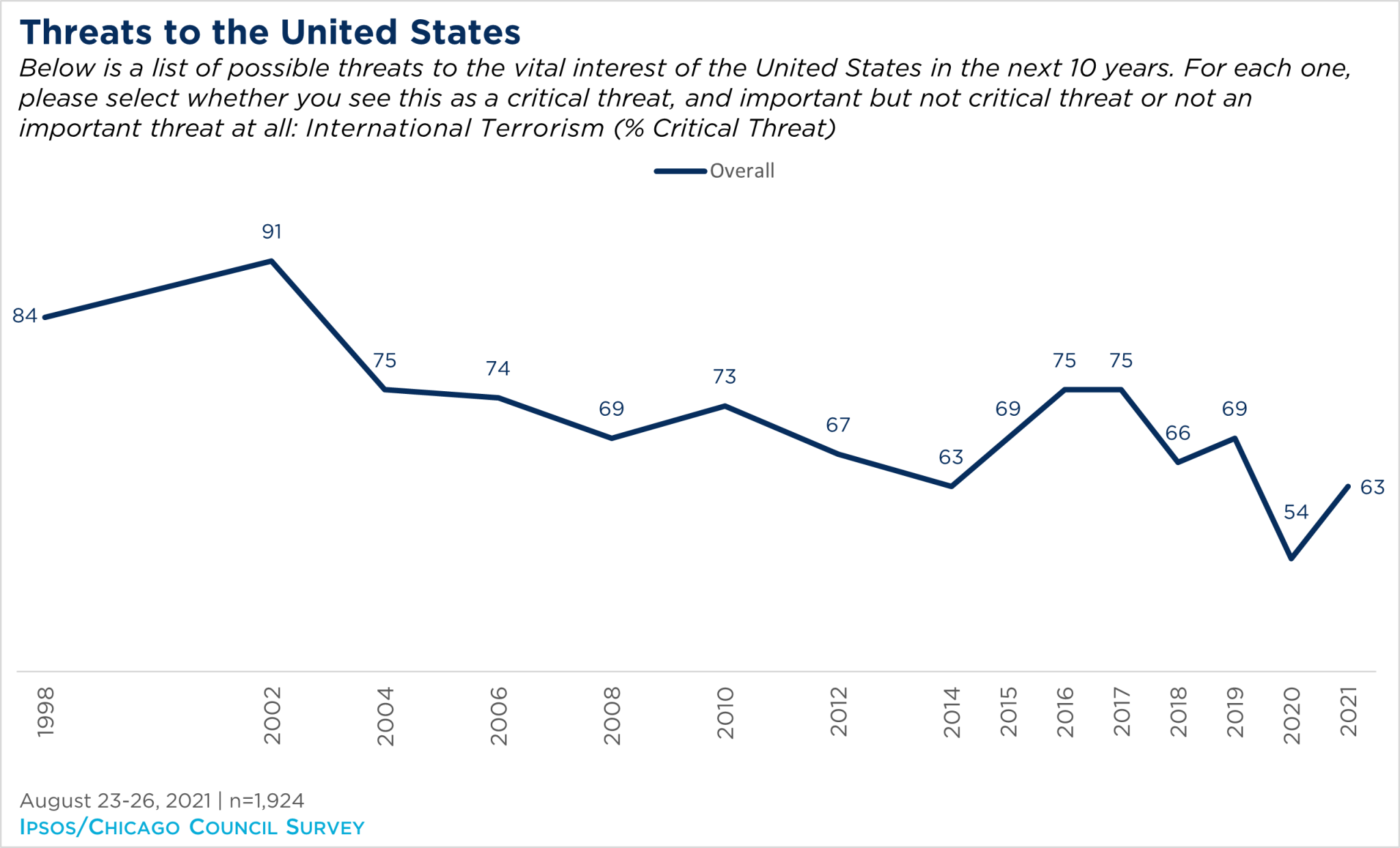