Findings from this Chicago Council on Global Affairs survey show that Russians believe eastern areas of Ukraine should be independent states.

Findings from a new binational survey, conducted by the Chicago Council on Global Affairs and the Levada Analytical Center, show that a plurality of Russians believe these eastern areas of Ukraine should be independent states. And a majority of Russians continue to say that Russia’s annexation of Crimea has brought the country more good than harm.

The conflict between Russia and Ukraine remains unresolved and—after five years—it does not appear to be reaching a resolution any time soon. The ongoing crisis in eastern Ukraine between the Ukrainian government and rebel forces supported by Moscow not only degrades the relationship between Kiev and Moscow but also contributes to the deteriorating relations between Russia and the West. 1 This particular regional conflict has become an important destabilizing factor for international security. Findings from a new binational survey, conducted by the Chicago Council on Global Affairs and the Levada Analytical Center, show that a plurality of Russians believe these eastern areas of Ukraine should be independent states. 2   And a majority of Russians continue to say that Russia’s annexation of Crimea has brought the country more good than harm.

Tradeoffs for Action in Crimea, Ukraine

Continued fighting between the Ukrainian government and rebel forces in the Donetsk and Luhansk republics is a double-edged sword for the Kremlin. On one hand, an ongoing conflict in Ukraine serves as a barrier to Ukrainian ambitions to join NATO and the European Union, something Russia has long opposed. On the other hand, Russia’s involvement in that ongoing conflict provides little room for improvement in Russia’s relations with Europe and the United States. 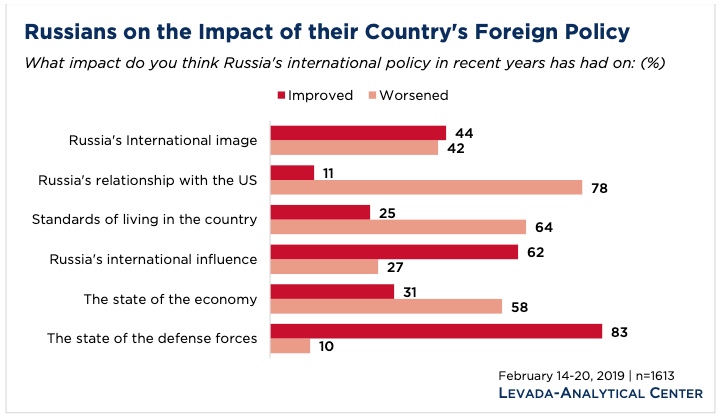 While Russia’s annexation of Crimea was the catalyst for its isolation from much of the international community, Russians see both positive and negative impacts from their government’s recent actions abroad. A majority of Russians believe Russia’s foreign policy negatively affected the country’s economy and standards of living. However, those who think that the annexation of Crimea brought more good are also more positive about the effects of Russia’s international policy on its economy (40% vs. 31% in general) and standards of living (32% vs. 25%).

Russian opinion is more divided on the effect of the Kremlin’s foreign policy on Russia’s image abroad, but they also see several upsides. A majority are convinced Moscow's foreign policy has improved the country’s international influence and the state of their country’s military forces. They also describe their country as a rising (83%) military power. 3

The West took umbrage to Russia’s annexation of Crimea, which Barack Obama, then the US president, likened to “dark tactics of the 20th century.” 4   However, according to a March 2019 Levada Center poll, 71 percent of Russians do not see the annexation of Crimea as a violation of international law. The public rejects what it sees as the Western narrative that the annexation was illegitimate. 5   Instead, they find legitimacy in the results of the 2014 referendum in which 96 percent of Crimeans voted to become part of Russia. 6  Still, the number of Russians who think Russia violated international agreements by annexing Crimea has risen slightly since 2016 (from 9% to 17%). 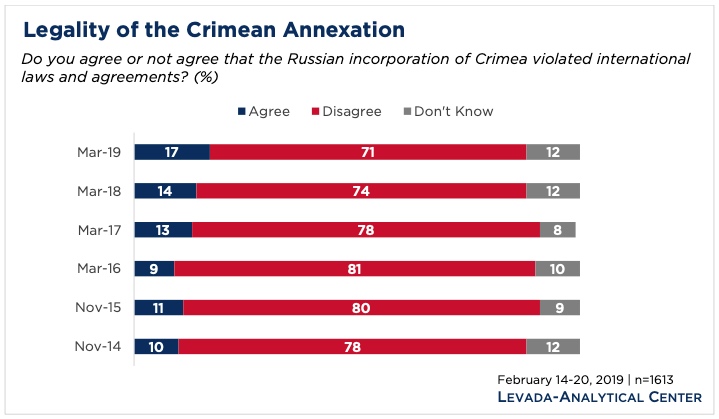 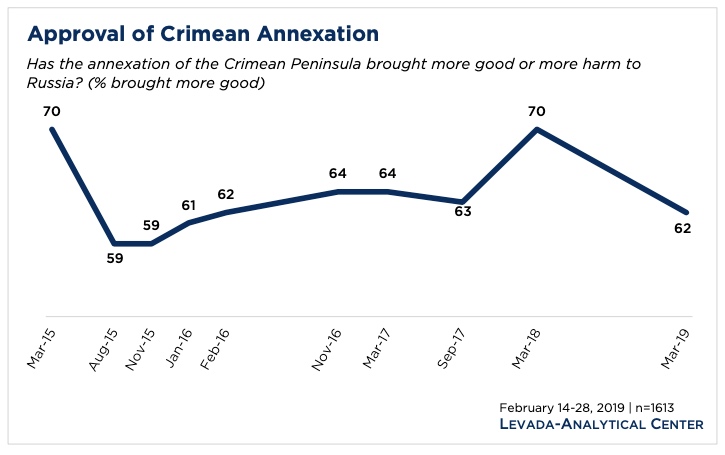 What Donetsk and Luhansk Will and Should Be

In contrast to their views on Crimea, Russians are mixed on the future of Donetsk and Luhansk possibly because a resolution to the conflict in eastern Ukraine is far less straightforward. The terms agreed upon by Ukraine, Russia, France, and Germany under the Minsk II agreement for the re-integration of the rebel republics in Ukraine do not seem realistic. 7 Russia insists on the Ukrainian government’s decentralization, which Ukraine has little interest in implementing. In certain ways, the Russian public’s mixed view on re-integration of the republics mirrors that of the leaders attempting to negotiate a resolution to the conflict.

Levada surveys have shown a decline in interest among Russians to absorb these Ukrainian regions. 8   In April 2014, one-third of Russians thought Donetsk and Luhansk should be a part of Russia in the near future (35%) while a quarter of Russians welcomed the independence of Donetsk and Luhansk (25%). Yet once the military clashes between separatist and government forces in eastern Ukraine broke into open warfare and Western sanctions against Russia were introduced, the public became less enthusiastic towards the idea that these republics would become part of Russia. After 2015, when the tensest phase of the conflict ended, the number of Russians in favor of seeing eastern Ukraine become a part of Russia started increasing again.

Which of the following options would you like more?

Table provided by the Levada-Analytical Center.

The Fate of Luhansk and Donetsk

The analysis in this report is based on data from a joint Chicago Council-Levada Analytical Center survey on Russian and American Attitudes conducted in February 2019.

The US survey was conducted by Ipsos Public Affairs using their national online omnibus service, KnowledgePanel™, between February 22-24, 2019 among a weighted national sample of 1,016 American adults, 18 years of age or older, living in all 50 US states and the District of Columbia. The margin of error is ±3 percentage points.

The Russia survey was conducted between February 14-20, 2019 by the Levada-Center (Levada Analytical Center) with face-to-face interviews conducted among a representative sample of 1,613 persons aged 18 years and older, living in eight federal districts of the Russian Federation. Inside each district, the sample is distributed among five strata of settlements proportionally to the number of population living in them, 18 years of age or older. The margin of error is ±3.4 percentage points.