Public support for the 2021 infrastructure bill breaks across party lines and may miss the connection to US competitiveness.

Former President Trump pursued a bipartisan agreement to improve US infrastructure during his administration, repeatedly declaring “infrastructure week” through his term. But it was President Joe Biden who was finally able to shepherd a $1 trillion infrastructure bill through Congress this week with bipartisan support.

The next step for President Biden is selling the bill to the American people. "My message to the American people is this,” said Biden at the bill’s signing ceremony. “America is moving again, and your life is going to change for the better." He also made the case that the Infrastructure Investment and Jobs Act would help increase US competitiveness against China, arguing that it “puts us on a path to win the economic competition of the 21st century that we face with China and other large countries and the rest of the world.” 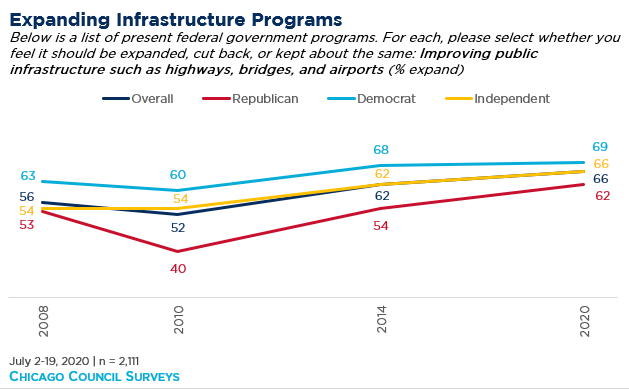 These align with findings from recent polls specifically about the legislation. An ABC News-Wall Street Journal survey conducted November 7-10, following the bill’s passage, finds that 63 percent of Americans support “the federal government spending one trillion dollars on roads, bridges and other infrastructure.” Similar majorities supported the legislation in an October Quinnipiac poll (62%) and an August USA Today-Suffolk University survey (63%). But support was sharply partisan. In the Quinnipiac poll, the bill was supported by 85 percent of Democrats and 62 percent of Independents, but only 38 percent of Republicans. The pattern was similar in the USA Today-Suffolk poll.

While there is overall majority support for the bill, it is less clear that Americans believe it will benefit the United States in its competition with China. The 2021 Chicago Council Survey shows that the US public is broadly concerned about competition from China, and is notably less confident in US economic and military strength compared with China now than they were two years ago. But Americans do not appear to make a connection between domestic infrastructure improvements and US global influence. When asked about different policies and their importance to America’s influence around the world, the public rates increased infrastructure spending well below other items: 10th out of 12, with only 43 percent seeing such improvements as very important to US global influence.

This mix of support for infrastructure with doubts about its importance for US global influence means that the onus is on the Biden administration to explain how the bill will increase US economic clout around the world to the benefit of American workers. It is also a political opportunity to brand the new, popular projects made possible by the work of Biden and the Democratic Party. As Democratic Representative James Clyburn from South Carolina put it in a recent New York Times article, “Democrats have never done a good job of telling people what we have done… We’ve got to do the work, sure, but then we’ve got to go back and tell people that we’ve done it.”

Tackling Inequality by Investing in Infrastructure
Interactive Alexander Hitch
By investing in infrastructure, the United States can prepare communities to participate in a changing economy, increase access to opportunity, and address challenges highlighted by the COVID-19 pandemic.
Issues Public Opinion
Regions North America
Back to Blog Listing