While Americans may support a retaliatory strike if the United States is attacked, Council polls reveal they oppose using nuclear forces to defend allies.

In his opening remarks at the long-awaited alliance summit in Madrid, NATO Secretary General Jens Stoltenberg announced that a key outcome of the meeting would be a new Strategic Concept. This strategy document will act as a “blueprint for NATO in a more dangerous and unpredictable world,” and will initiate a “fundamental shift” in the way the alliance thinks about deterrence and defense.

The new Strategic Concept heralds US strategic nuclear forces as the “supreme guarantee of the security of the alliance,” but the American public seems less certain about their country taking on that role. Recent polling from the Council reveals that, at least at the public level, Americans are hesitant at best to commit to using nuclear weapons to defend NATO allies.

Americans Unwilling to Use Nuclear Weapons on Allies’ Behalf

In a March 25–28 Council poll, respondents were asked whether they would support the use of nuclear weapons in various situations. As part of the question, they were informed that the United States has promised to defend allies with nuclear weapons as part of its commitment to NATO. Even with this reminder, only 44 percent say they would support the use of nuclear weapons by the United States if a NATO ally is the victim of a nuclear attack, and support is even lower (31%) if the initial attack on the ally is chemical or biological in nature.

So does this mean that the United States is a country of anti-nuclear doves? Not exactly. More than seven in 10 Americans would support a retaliatory nuclear attack if their own country was hit with a nuclear weapon (72%), and a bare majority would even support the use of nuclear weapons in response to a chemical or biological attack on the United States (54%). 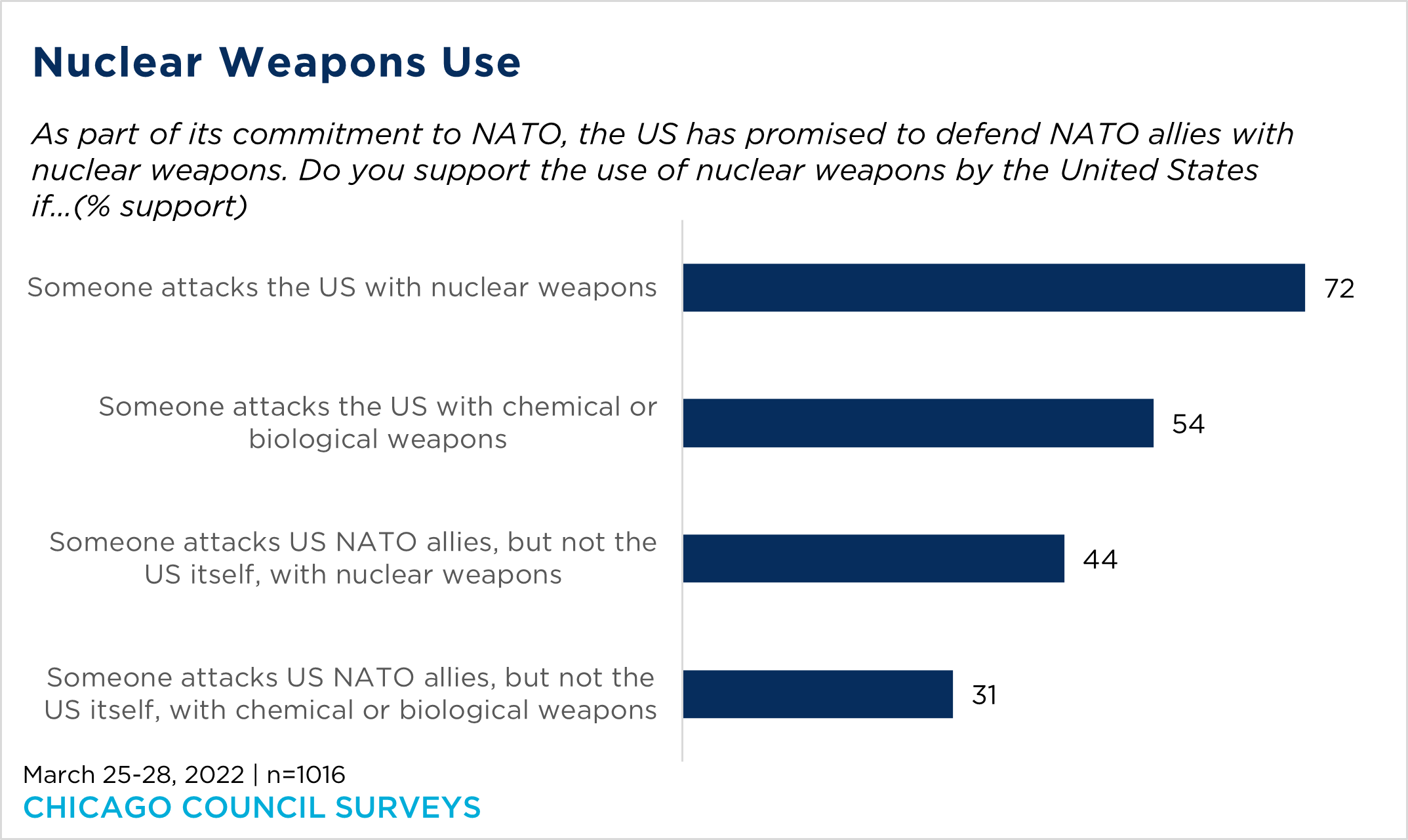 Partisan Agreement on the Big Picture

American hesitance to use nuclear weapons as a response to any and every attack is, of course, understandable. Americans consistently identify the use of nuclear weapons, particularly in an exchange between the United States and Russia, as a top security threat, and see preventing nuclear proliferation as a very important foreign policy goal. Escalation would also be a catastrophic risk of any use of nuclear weapons. However, the current tension remains: NATO’s security posture relies heavily on American strategic nuclear forces, but their deterrent power is muddled if the US public remains firmly and vocally opposed to the possibility of using them to defend allies.